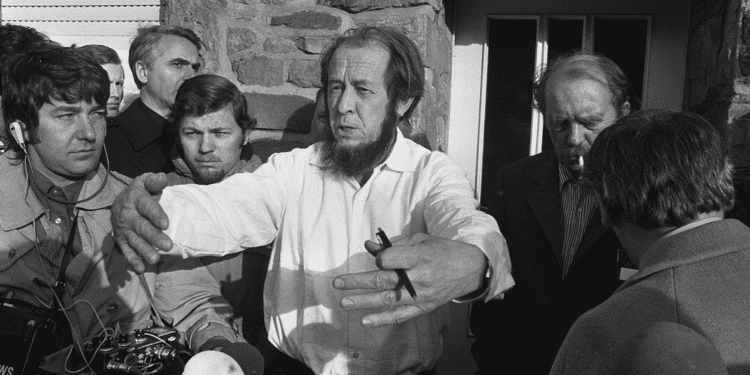 Solzhenitsyn, The National Question, Russia's Revolution, And The Jews

So far the MSM commentariat has failed to find some obvious connections between globalization and a relatively recent social experiment—the Russian Revolution. Apparently, it's easier to speculate about the nascent internationalism of Alexander the Great, the Knights Templar(mentioned by the Economist as the earliest multinational company) or Genghis Khan than it is to try to explain critical events of 90 years ago.

At the beginning of the 20th century, Europe imagined itself on the threshold of worldwide enlightenment. The growth of international socialism would end nationalism, it was widely believed. At most, "national questions" had become mere irritants to be swept aside on the road to the Great Enlightenment.

More recently, all this has been happening again. But this time the triumphalism is capitalist (at least Davos-style capitalism). Thus Wall Street Journal late editor Robert Bartley notoriously declared the nation-state dead. Bartley never explained, at least in public, what he thought would replace it. But I suspect he would have shared the Economist's enthusiasm over the fact that General Electric "seems able to train … its recruits to think as GE people first and Indians, Chinese or Americans second."[Globalization's Offspring, The Economist, April 7, 2007]

However, long before the editors of the Wall Street Journal and The Economist were acting as if the primacy of international commerce and consumerism had trumped the  nation-state, the creators of the Soviet empire were insisting that all peoples would blend peaceably together into one. For the Bolsheviks too, there was no "national question" and no nation-state.

For instance, both Lenin and Stalin regarded Jews as a nation which existed on paper only. They predicted the 4,000 year-old people, along with all other nations, would soon become part of a new nationality-free human race. Trotsky, the supreme internationalist, ostentatiously disavowed his Jewish identity.

Alexander Solzhenitsyn addresses post-nationalism directly in his latest work 200 Years Together. (Volume 1, on pre-Revolutionary Russia, was published in Russia in 2001; Volume 2, covering the Revolution and the Soviet era, in 2002).  In a remarkable cultural development, 200 Years Together has yet to find an English-language publisher, arguably because of its frank focus on Russian-Jewish relations, although the eminent Jewish scholar Richard Pipes, reviewing the first volume in the New Republic, concluded that Solzhenitsyn "absolves himself of the taint of anti-Semitism".

Solzhenitsyn's work, however, ranges far beyond Russians and Jews.

He observes that doubts about the validity of national identity tend to rise at various times when useful to those in power or as part of political strategy. Such was the straitjacket imposed on thought by Soviet socialism that nationality was understood as "a social construct" that could easily be de-constructed. As Solzhenitsyn observes in his frank way:

"Before the camps, I regarded the existence of nationality as something that shouldn't be noticed—nationality did not really exist, only humanity. But in the camps one learns: if you belong to a successful nation you are protected and you survive. If you are part of universal humanity—too bad for you."

Solzhenitsyn proposes that the "February" revolution of 1917, while establishing civil rights for all minorities in the realm, was essentially a "Russian" revolution carried out by Russians for Russians. The February Revolution was a ruinous misstep, but at least it did not require the complete destruction of all that went before it.

But the second, or "October", revolution in 1917 was an "internationalist" revolution and destroyed the entire order that fell into its grasp.

Solzhenitsyn notes it was "international vanguards" that mowed down Easter worshippers as they processed from the old city in Tula in 1918. It was internationalists who banned the teaching of "reactionary", "nationalist" Hebrew and set up "living synagogues" and "living churches" where Lenin's portrait was to hang in a prominent place on the walls.

The Bolsheviks undertook a great social experiment, which they expected would be copied and expand across the globe. Indeed, some Bolshevik ideologues held that the proletarian dictatorship would not succeed unless it encompassed the entire globe. It's not just capital which has no fatherland.

The October Revolution poured convulsively outward, establishing a temporary beachhead for the global proletarian dictatorship in Warsaw, Budapest, Berlin and Bavaria as well as challenging the governments of China and Western Europe.

It attracted Western intellectuals who could be found buzzing around Moscow in the early years after the revolution. And not only intellectuals—Solzhenitsyn quotes this from a diarist of the time after the suppression of the rebellion against the Bolsheviks in the Baltic seaport Kronstadt:

"For 3 days Latvians, Bashkirians, Hungarians, Tartars, Russians, Jews and an international rabble crazed by alcohol and the smell of blood raped and killed without restraint."

These were halcyon days for European leftist intellectuals—anticipating the swoon in some circles over globalism today.

What would it take to end the left's enchantment with the Soviet experiment? Solzhenitsyn reports on the efforts of B.D. Brutskus to raise a protest among Western intellectuals in 1930, long after the horror of the Soviet regime was obvious to those with eyes to see, Albert Einstein signed a protest after the execution of food industry workers in September, 1930 for "causing" famine. But Einstein later withdrew his signature saying the "Soviet Union has achieved a great accomplishment" and "Western Europe… will soon envy [the Soviets]". Romain Rolland, the French author and winner of the Nobel Prize in Literature in 1915, refused to protest the criminal regime. Solzhenitsyn reports that only "Germans and rightists" could be found to protest Soviet barbarism. The glorious future beckoning from just over the horizon justified any means.

Solzhenitsyn notes the ranks of the Soviet apparat were predominantly Russian, but political power, at least in the early years, was international and "its diverse elements united to form an anti-Russian front against a Russian state and Russian traditions." Despite the anti-Russian orientation of early Soviet power and the multinational makeup of the executioners, Solzhenitsyn says it was still Russians who were blamed for enslaving the other ethnics that made up the Soviet empire.

Further, Russian ethnicity conveniently substituted for the boilerplate class-origins categories that were scapegoated by Soviet PC history for all that went wrong in Russia's past.

From Solzhenitsyn's experience in the camps:

"All nations in the Gulag crawled in order to survive and the lower to the ground they got, the better the chances of survival. But Russians in 'their own Russian' camps were the lowest order."

Any denationalization campaign leads with an assault on the core nationality of the nation-state.

"During the 20's the very understanding of Russian history was changed—there was none! And the understanding of what a Russian is was changed—there was no such thing! And what was most painful, we Russians ourselves willingly walked along this suicidal path. The period of the 20's was considered the dawn of liberation…. I recall from my school days that even the word 'Russian', such as 'I am a Russian' sounded like a call to counter-revolution…. But everywhere was heard and printed the term 'Russopyati'."

Sound familiar? In "liberated" America, only minorities can claim a national identity. Elite foundation support for racist organizations, "affirmative action" for immigrants, the astonishing alliance between the welfare state and corporate power, border guards jailed while drug dealers roam free, federal handout programs, such as the USDA Minority Farm Register which explicitly excludes white farmers no matter how poor while including recent immigrants no matter how wealthy, an amnesty and mass invitation to welfare—could the most evil xenophobe have dreamed up better ways to identify centralized power with immigrant entitlement and privilege?

This and faux multiculturalism, a maidservant of the globalist agenda, have resulted in one group being asked to deny its nationality and past while others are encouraged to play up their separate identity.

A pernicious co-dependence of the state and aggrieved minorities is the ultimate irony of the new "universal nation". Its clearest mainstream political expression is found in presidential hopeful Bill Richardson's oft-repeated question: "What do Hispanics want? Fully funded government programs!"

The state can never grow large enough to satisfy the wants of newly-arriving immigrant groups, especially when it is encouraging the growth of those groups and their expectations. At the same time, to the extent the state is identified, rightly or wrongly, with minority or immigrant privilege, it will lose its legitimacy and core support.

Of course, in some ways it might appear to be simpler if nationality did not exist and everyone on earth had the same way of life. That's the presumed, unmentioned benefit of globalization and the varying ideologies that travel with it.

In contrast, Solzhenitsyn asserts that "the erosion of nations… will sooner lead to the entropy of the soul… not the unification of humanity". And the 20th century showed us just what that "entropy of the soul" can bring.

Commentators wisely refrain from predicting what a truly globalized world will look like in the end. The Russian Revolution, a signal event of the universalist, socialist vision remains little understood. And the work of one most capable of explaining it has been ignored.

But a debate is underway, perhaps out of public view, over the proper balance between the universal and the national.

The latter is still very much alive—100 years after it was supposed to die.

And every nation must face the dilemma noted by Solzhenitsyn:

"How difficult and intertwined are the ways of self-preservation and self sacrifice which alone can save humanity."

Thomas Allen (email him) describes himself as a recovering refugee worker. Fluent in Russian, he is currently translating 200 Years Together.