The National Press Club, James Watson, The Clintocalypse Clampdown: What Unites The Alt Right Is Resistance To Lies

Three weeks ago, I floated the word "Clintocalypse" to describe how the end of the world as we know it would follow a victory for Mrs. Clinton. Other opinionators were having the same thought.

The one who's been getting most coverage—no, I don't begrudge it, honestly [sound of weeping]—is the pseudonymous writer Decius and his The Flight 93 election. But another I particularly liked was NeverTrumps and the End of America as We Know It, by Jared Peterson at American Thinker:

The election of Hillary Clinton would mean final defeat for American conservativism—for at least a generation and almost certainly for much longer than that.

Peterson names names in the NeverTrump camp: George Will, William Kristol and Jonah Goldberg. These folk will do fine in the Clintocalypse, he says. They will serve as court jesters to the triumphant Cultural Marxist ruling power, chattering away impotently and raising an occasional laugh while the transformation of our republic into a northern hemisphere Brazil proceeds unhindered.

Still, neither commentator ventures very far into the speculative badlands we explore on the Alt Right: questions about why different ancestral populations display such different outcomes when considered in quantity, as communities or nations.

If, following a Clintocalypse, the machinery of state falls entirely into the hands of Cultural Marxist  apparatchiks, one thing we may expect is more of a clampdown on dissent. Some suggestive recent developments:

OK, it’s a private organization headquartered in Washington, DC for the promotion of journalism. It advertises itself as "the world's leading professional organization for journalists." It's venerable, founded 1908; the same year, if I am not mistaken, as saw the establishment of America's—in fact I think the worlds—first School of Journalism.

(Of course I scoff and sneer at this elevation of journalism into a credentialed profession like dentistry or civil engineering). 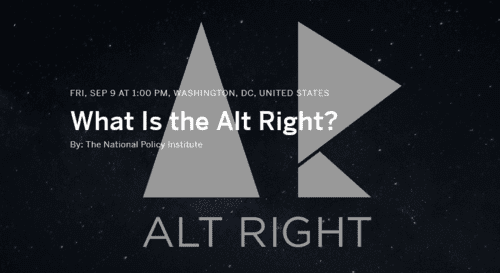 But the National Press Club puts on speaker events and debates on topics of public interest, especially when those topics cause a stir in the world of journalism. It was therefore entirely natural that they would agree to host a session on the Alt Right.

Thanks to Mrs. Clinton's August 24th speech, the expression "Alt Right" is recognized today by several thousand times more Americans than were aware of it on August 23rd. So this was an excellent topic for airing—just the kind of thing the National Press Club exists for. Right?

This event was the brainchild of Richard Spencer, whose National Policy Institute [NPI] is a major pillar of the Alt Right edifice. Spencer is in fact sometimes described as the leader of the Alt Right, although not many acknowledge that the Alt Right needs a leader.

Scheduled speakers were Richard himself of course, Jared Taylor of American Renaissance, and our own Dear Leader here at VDARE.com, Peter Brimelow.

Suddenly, on Wednesday evening, just a few hours after the event had been announced, the National Press Club reneged on their contract and cancelled the event.

The Club cited "security concerns." That is somewhat less than persuasive. For one thing, Richard Spencer had told them that should any extra security be required, his outfit, the NPI, would pay for it.

For another thing, the National Press Club has hosted several of NPI's events before, going back at least five years. Last October they actually hosted NPI's annual conference. More evidence of the intensifying clampdown on dissent.

For yet another thing, the Club has hosted events that raised far more security concerns than NPI. Nine years ago for example they hosted Iranian President Mahmoud Ahmadinejad, Li'l Squinty himself, outspoken Jew-hater and Holocaust-Denier.

The cancellation came accompanied by what sounded to me very like the squeaking of weasels. the Director of the National Press Club, Bill McCarren, [Email him] ,has over the past few weeks tweeted or re-tweeted several items enthusiastically supportive of Mrs. Clinton. Since the cancellation was announced he has deleted those of the tweets he had access to.

Squeak! Squeak! And no, those were not squeaks of fear. What should McCarren be afraid of? In the elite media and journalistic circles in which he dwells, roughly 99 percent of his co-dwellers think that Alt Right spokesmen should be arrested and charged with hate speech.

No, those weasel squeaks we heard were squeaks of embarrassment. The room where the Alt-Right event was to be held, you see, is called The First Amendment Lounge, and is a space dedicated to freedom of the press. [Laughter.] 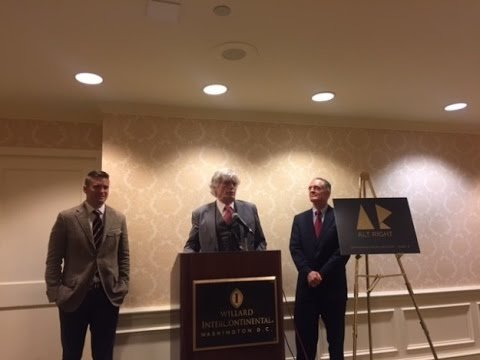 I suppose we can take some slight comfort in the fact that Weasel McCarren is, at least, still enough of a human being to be embarrassed.

The event took place anyway, at the Willard Intercontinental Hotel on Pennsylvania Avenue—a mere stone's throw, if you'll pardon the expression, from the White House. The precise venue was the Peacock Room.

That prompts me to the following suggestion to Bill McCarren of the National Press Club. Perhaps, after a hundred-and-odd years, you might consider renaming some of your rooms to better reflect the journalistic milieu of the early 21st century. Follow the Willard’s example: the First Amendment Lounge could become the Weasel Room. 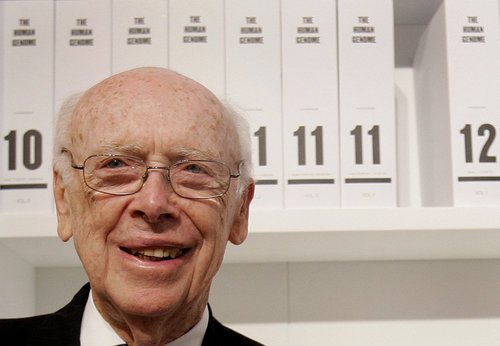 Both things are a matter of common observation. Both things are supported by decades of evidence. Both things are, however, not to be spoken aloud in polite company. Watson lost his position as head of Cold Spring Harbor lab for what he said about blacks, and endured many indignities at the hands of CultMarx enforcers.

Watson was invited to speak at New York University's Langone Medical Center, September 12th. But when the invitation was posted, activists at the NYU Student Council and something called the Student Diversity Initiative sent a honking letter to the organizers of the lecture. NYU thereupon went into full PC cringe mode and cancelled the invitation.

I read about this on a website written by University of Chicago biology Professor Jerry Coyne. Professor Coyne objects to the cancellation of Watson's lecture, but in the most mincing, mealy-mouthed way possible, I suppose to safeguard his own social standing.

Provocative of what? Of disagreement? That's the very stuff of academic debate. It should be provoked in a university.

As for Coyne's last adjective, "unevidenced," it is a lie. There is a vast mass of evidence for race differences in intelligence. Such differences are also what you would expect a priori, as normal features of variation within species.

It's true we don't yet know the full genetic architecture of race differences in intelligence. As human-science blogger JayMan says, though: You don't need to know the name and job title of every worker in the factory to know the factory produces widgets.

Since the Alt Right came to widespread attention last month, the question has been in the air: What unites us? What do we have in common?

We've even been asking it among ourselves. What is it that makes a person think: "Yeah, I belong to this Alt-Right they're talking about. Or at any rate, their way of seeing the world looks a lot like mine"?

Well, I've been hanging out with Alt-Right types for a while. I've known Jared Taylor for twenty years; Peter Brimelow for sixteen; Richard Spencer I think for eight or ten. All have been guests at my house, I am proud to say.

I've been to conferences, mingled with supporters, spoken myself. I know this territory really well. So what, in my opinion, makes the Alt-Right a distinct thing—not by any means a party, a faction, or a movement, but a collection of souls with something in common?

The lies are so flagrant, so outrageously obvious, you'd have to laugh at them—if not for the fact that laughing at them is close to being a criminal offense.

"There is no such thing as race!" What a preposterous thing to say! What a multiply preposterous thing for an academic in the human sciences to say. Yet look!—they say it! [ Why racism is not backed by science | As we harvest ever more human genomes one fact remains unshakeable: race does not exist,  by Adam Rutherford, Guardian, March 1, 2015]

But of course there are such things as families. And that's all races are: big old extended families of mostly-common deep ancestry.

This acquiescence in obvious lies—even by academics, who should be the guardians of truth—is characteristic of totalitarian societies. The money quote here is from Tony Daniels, a/k/a "Theodore Dalrymple."

In my study of communist societies, I came to the conclusion that the purpose of communist propaganda was not to persuade or convince, not to inform, but to humiliate; and therefore, the less it corresponded to reality the better. When people are forced to remain silent when they are being told the most obvious lies, or even worse when they are forced to repeat the lies themselves, they lose once and for all their sense of probity. To assent to obvious lies is … in some small way to become evil oneself. One's standing to resist anything is thus eroded, and even destroyed. A society of emasculated liars is easy to control. I think if you examine political correctness, it has the same effect and is intended to.

Tony himself, I should say, lines up with Goodwhites in the Cold Civil War, not with us Badwhites of the Alt Right. His insight there, however, is very penetrating, and could be inscribed on an Alt Right banner, if we ever get around to brandishing banners.

And so it is with the NYU Student Council ninnies and the Student Diversity Initiative bedwetters, not one of whom is fit to shine James Watson's shoes.

They, midgets and mites, want to humiliate a giant—one of the world's greatest living scientists.

And the cringing administrators at New York University want to help them! [Email Andrew Hamilton, President of NYU]

That's what the Alt Right is about, that's what unites us—disgust with, and resistance to, these liars and weasels and commissars.