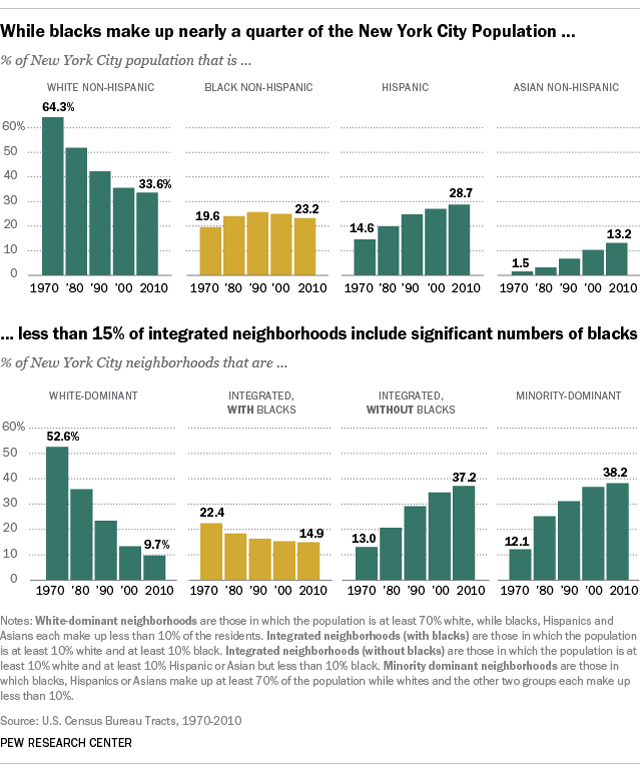 From the Pew Research Center:

Sign of things to come? Integration without blacks in New York City neighborhoods

New York City has always been a trendsetter for the rest of the country in art, fashion and cuisine. Now two researchers have documented a new demographic trend in the Big Apple that they suggest may be a glimpse of the future for other large American cities.

Researchers Ronald J.O. Flores and Arun Peter Lobo call it integration without blacks. In the past 40 years they found nearly a three-fold increase in the share of integrated New York City neighborhoods with a mix of whites, Hispanics and Asians but few, if any, blacks.

At the same time, the share of integrated neighborhoods in which blacks comprised at least 10% of the residents fell by about a third, Flores and Lobo reported in the latest Journal of Urban Affairs.

The result, they wrote, is an “emerging black/non-black color line, where Asians and Hispanics are increasingly aligned with whites while distancing themselves from blacks.”

Using Census data, the researchers analyzed shifts in integration patterns in 2,111 New York City census tracts between 1970 and 2010. This period marked an explosive period of demographic change in the city: During that time the share of whites-nearly two-thirds of the population in 1970-fell by about half to roughly 33%, while the proportion of blacks remained relatively stable at about 23%. At the same time, the city’s Hispanic population doubled to 28% and the Asian share grew more than six fold to 13%.

The researchers used census tracts as proxies for neighborhoods. They defined an integrated neighborhood as one in which whites comprised more than 10% but less than 70% of all residents while some mix of blacks, Asians or Hispanics comprised the remainder.

Since 1970, Flores and Lobo found that the proportion of “integrated, without blacks” neighborhoods nearly tripled from 13% to 37% in 2010. At the same time, the share of “integrated, with blacks” areas fell from 22.4% to 14.9%. The biggest changes were in neighborhoods where minorities made up at least 70% of the residents, which grew dramatically, and those where whites were the clear majority, which plummeted as a share of all census tracts.

This pattern is hardly new in some places outside of New York: it was common in Southern California a generation ago. But it is interesting to see it playing out in New York City.

My guess is that in a half century or so, African-Americans will look back in wonder from their current residences in Section 8 podunkvilles at the fact that a century before they heavily inhabited the great liberal cities of America, that they used to live in large numbers on Manhattan, in the nation's capital, a few miles from the beach in L.A., along the lakefront in Chicago, near downtown Boston, and even in San Francisco! It will seem strange in 2063 that back in the early 21st Century, the synonym for black music and black radio stations was "urban."

Here's an alternative possibility, however: if crime can be brought down even further in the Surveillance State, maybe African-American neighborhoods will become more attractive to white gentrifiers, even if they can't push all the blacks out.

By the way the top graph showing the steady rise in NYC's Asian population reminds me of something a New York reader told me awhile ago. She says that while today it seems inevitable that Jews like her will more or less dominate New York City politics forever, she looks around and sees an ever-growing number of Chinese competently inhabiting New York. Maybe, she says, in a half century New York will be a Chinese-dominated city?