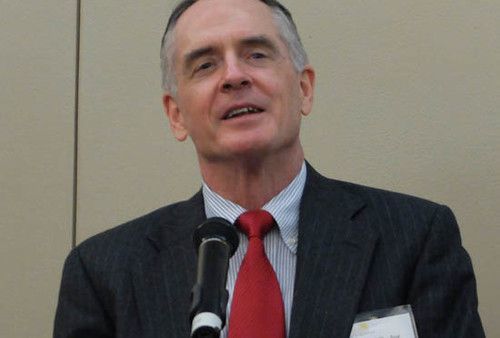 Jared Taylor: Donald Trump, White Supremacism, And The Insanity Of The WASHINGTON POST

I have never liked that cliché definition of insanity: doing the same thing over and over and expecting different results. As an amateur musician, I count on different results. It’s called practicing. But when it comes to dealing with the Main Stream Media, maybe it is indeed insanity.

The Washington Post recently interviewed me for a story about robocalls I made to support Donald Trump in Iowa [Hear a white nationalist’s robocall urging Iowa voters to back Trump, January 12, 2016]

The reporter, Peter Holley [email him], was the usual bright young lad, and we had a 45-minute phone conversation that covered a lot of ground.

People who know nothing about racial dissidents call us “white supremacists,” so I explained why that’s wrong.

Me: “No, I’m not a white supremacist. If that’s someone who wants to rule over people of other races, I’ve never even met one. They’re extinct.” Mr. Holley: “What about someone who thinks white people are superior to other people?” Me: “I don’t think that. East Asians have higher average IQs, lower crime rates, fewer illegitimate children—they’re superior to whites in lots of ways. Do you want to call me a ‘yellow supremacist’?”

I went on to explain that “white supremacist” is the most morally-loaded expression of contempt for a white person in the English language. I told him it’s the equivalent of calling blacks ni**ers. If you want to say someone is so wicked and primitive that you needn’t pay attention to a word he says, you call him a “white supremacist.”

Well, Mr. Holley managed not to call me the equivalent of a ni**ger—but referred to me as “editor of the white supremacist magazine American Renaissance.”

When I emailed to ask him why AmRen is “white supremacist” he wrote back to say: “I think, given the content of your magazine, that’s not inaccurate.”

I suppose the best we can hope for from Washington Post is that it be “not inaccurate.”

So what did he call me? A “white nationalist.”

As I like to ask, what do you call a black person who prefers black culture and prefers to live and hang out with other black people? A black person. It’s the ones who don’t prefer black culture etc. who are called names like “Oreo.” It’s the same with Hispanics. “Coconut” is not a compliment.

But as soon as a white man says he prefers white people and European culture then you need a swear word for him. If you’ve been talked out of “supremacist” you go with “nationalist”—because it has the bomb-throwing aroma of Basque or Kurdish nationalism.

Years ago, I sometimes let people class me as a “white nationalist.” But I’ve since concluded that the term is hopelessly tainted. White advocate, race realist, identitarian—I accept any of those terms. But I can’t get the WaPo to use them anyway.

The less sophisticated-East Cost-liberal that a paper is, the better. Local community fishwraps have written touchingly straightforward stories about me. Even USA Today recently wrote “Taylor, who describes himself as a ‘white advocate,’. . . .” [White nationalists urge support for Donald Trump in Iowa, by Fredreka Schouten, January 12, 2016]

I tried to warn WaPo’s Mr. Holley about the Southern Poverty Law Center ($PLC to VDARE.com). For the 100th time, I tried to explain how contemptible it is to look for people with whom you disagree, claim to read their minds, and then call them “haters.” It’s like “white supremacist.” “Haters” are so unhinged that what they say is sure to be rubbish, so if the SPLC’s Mark Potok says Jared Taylor is a hater that’s all you need to know about him.

But, as I told Mr. Holley, it’s even more contemptible when journalists fall for this. Why ask a sworn enemy what he thinks I think? Lyndon Johnson hated Robert Kennedy, but newsmen didn’t check in with Johnson every time they interviewed Kennedy. No one thinks he’ll get the straight dope on Benjamin Netanyahu from Yasser Arafat’s wife. What’s with this fetish for ringing up Mark Potok every time you interview someone he doesn’t like?

But, as I predicted to Mr. Holley: “Your editor won’t let you write a story about me unless to talk to the SPLC.” and, of course, I was right.

Brother Potok must be laughing. He doesn’t even know me, but the MSM from around the world treat him as an expert on my private thoughts. WaPo’s Mr. Holley learned from him that my favorite trick is “adding to white supremacist language a pseudo-intellectual veneer.” (Another way to smuggle in the S-word.) Mr. Potok also explained that I have “very great pretensions to intellectuality.” That is his way of saying I went to college.

Mr. Holley further reports that Mr. Potok says I am “a man who described black people as psychopathologically incapable of sustaining civilization in any circumstances and as the authors of massive amounts of crime directed at white people." I’ve never used the word “psychopathological” in my life, and when American Renaissance writes about crime rates we use the best government statistics available.

Mr. Holley likes to get his quotes right, so he called me to verify some he wanted to use. “What you say is controversial,” he explained, “and I want to make sure I’ve got it right.” He had.

But why didn’t he ask about what Mark Potok claimed I said, which was a lot more “controversial”—and wrong? [VDARE.com note: See James Fulford’s blog about the probable source of Potok's claim.]

Maybe there’s something to that definition of insanity after all.

The frenzy over my Iowa robocalls appears to be over, and after being pestered for days by journalists who wanted him to slam those awful “white supremacists,” Mr. Trump did so, but in the nicest way. Erin Burnett of CNN played him my robocall and asked if it “shocked” him and would he “denounce” it. “Nothing in this country shocks me, but I would disavow it,” he said. He then explained that people are angry because of our loose border and illegals who rape and murder Americans. "Anger and energy is what this country needs," he said [Trump rejects white nationalist support, but not voters' anger, By Gregory Krieg, CNN, January 14, 2016].

I think I can still count on that cabinet position Mr. Trump promised me back when he told me he was going to run.