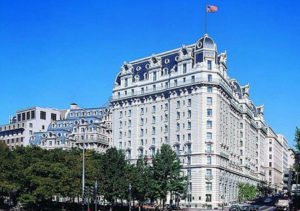 The Alt Right press conference with Peter Brimelow, Richard Spencer, and Jared Taylor which was supposed to be held in the National Press Club, actually took place in Washington's Willard Hotel.

In a cramped, carpeted ballroom at the Willard Hotel in downtown Washington, the rebranded "alt right" movement took a victory lap Friday and looked optimistically toward their future as a growing movement in the United States.

The press conference included all the same alt right notes that have become the centerpiece of the movement. There were discussions about an "ethnostate" and how to build one and debates about whether Jewish people could rightly identify themselves as European. One participant waxed poetic on why he is tired of being called a white supremacist in the media, and another predicted that the United States "will break up" over its divisions. Russia was applauded for being the "sole white power in the world." If the alt-right was in control, one of the presenters imagined there would be more images of beautiful "blonde women" running their hands through wheat fields.

"Race is real. Race matters and race is the foundation of identity," said Richard Spencer, one of the group's leaders and activists.

It is, of course, only "color-blind" white Republicans who believe that race doesn't matter. Leftists believe race matters, blacks believe race matters a lot, and the current President, who is both black and leftist, is the author of  Dreams From My Father, A Story Of Race And Inheritance.

After years in relative obscurity in chatrooms and anonymous forums online, the disjointed alt right movement, closely aligned with the white nationalist movement, is experiencing a bit of a renaissance at the moment. In Europe, a backlash against a refugee crisis has resulted in Brexit. And in the United States, at the top of a major party ticket, the alt right finally has a Republican candidate in Donald Trump it can rally around.

"It is in a way projecting on to him our hopes and dreams," said Spencer, a man who has said before he dreams of a white ethnostate. "We have not been made by Trump, but we want to make Trump and we want to imagine him in our image."

The alt right claims to have no leader, no spokesman, no formal organization. But in front of dozens of sympathizers and reporters, leading figures Spencer, Peter Brimelow and Jared Taylor outlined their own vision for the future of their movement and their most high-profile political spokesman yet, Trump.

The meeting had originally been scheduled to be held at the National Press Club, but was moved after according to participants "the National Press Club took the unprecedented step of cancelling the press conference citing unspecified "security" concerns." Reporters were then told to meet outside the Old Ebbitt Grill, across the street from the White House, but were again sent to another location, a ballroom in the Willard.

See National Press Club Director Bill McCarren, Who Cancelled Alt Right Press Conference, Deletes Anti-Alt Right, Pro-Clinton Tweet. By the way, if Bill McCarren [Email him] had genuine concerns about security, it may have stemmed from threats from "anti-racist activists." Such threats are common, and need to be investigated.

"Donald Trump is not alt right in the sense of his ideas. He is not really alt right in terms of his policies," Spencer said, nothing that his movement grew increasingly worried earlier this summer that Trump was backing way from his hard-right policies toward immigrants.

"We cannot be a Trump cheerleading squad," Spencer said about the movement's future, ruminating on the possibilities that the movement may even have to serve as a chief critic of Trump if he is elected and proves to be disappointing.

The gathering in Washington Friday came just weeks after Democratic nominee Hillary Clinton devoted an entire policy speech to the dangers of the movement. At the center of the conversation Friday afternoon was discussion about how the movement could keep that momentum going.

"Certainly, we have been riding his coattails," Spencer said of Trump. "There has been more interest in us because we have generally been pro-Trump."

Next up, the leaders agreed, was an aim toward professionalization and a hope that America was actually far more interested in segregation than it once admitted.

It's an interesting point that most of DC's punditariat are white, went to white schools, and work in largely white environments.

"Trump is in my view almost irrelevant," Taylor said. "We are gaining ground because we are right."

In order to move forward –with or without Trump– the alt right is beginning to see an opportunity to raise money, to start organizations, to put forward some of their own followers to run for city council or school board or political office.

"I understand people wanting to be anonymous but we have to get beyond that," Spencer said.

"We certainly have donors now. We are not operating on pixie dust, but part of the professionalization is of course fundraising," he added.

Taylor told the audience that his job wouldn't be over until at a PTA meeting, a woman could rise to defend the fact that fewer African Americans were in AP classes because they had a lower IQ and "no one objects."

The alt right claims it is bigger than Trump. It's "a struggle for the human soul," Spencer said.

"'inherently gloomy about the prospect of Africa' because 'all our social policies are based on the fact that their intelligence is the same as ours—whereas all the testing says not really.' "

Watson, a Nobel Prize winner, was immediately fired from his job, and just the other day  was told he couldn't be allowed to speak at a minor public university because he was somehow offensive. But it's still true.