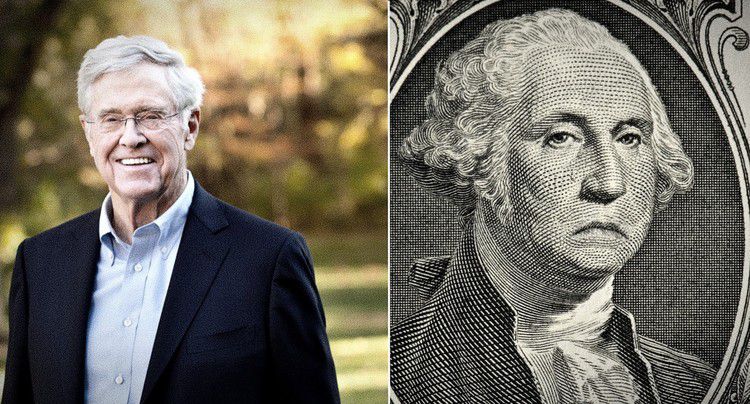 The Kochtopus Moves Left. And It’s Coming For The Historic American Nation

Donors to Donald Trump’s election campaign now have to worry about being doxxed and harassed by crazed totalitarian Democrats. [Shaming Trump donors by revealing they donated to Trump? What’s wrong with that?, by Michael Hiltzik, Los Angeles Times, August 8, 2019] But one well-known set of Republican donors don’t have to worry about this thuggery: the Koch brothers. They were once thought to be the puppet masters of the Right, derided by paleolibertarian gadfly Murray Rothbard as “the Kochtopus”—until Trump became the Republican nominee on a platform completely antithetical to theirs. Now the Kochtopus is moving decisively left.

One brother, David Koch, has retired. The other, Charles Koch, is as active as ever and continues to pour money into increasingly insidious causes. [One Koch Brother Forces the Other Out of the Family Business, by Jane Meyer, The New Yorker, June 7, 2018] Koch groups are promoting immigration increases and efforts to block immigration enforcement. Koch world is instrumental in pushing criminal justice reform that aims to unleash a new crime wave. The Koch donor network has indicated it may back Democrats in 2020. And, most unprincipled of all in an alleged “libertarian,” Charles Koch has teamed up with George Soros and the Anti-Defamation League to censor “extremist” a.k.a. anti-Leftist online content.

Of course, the Kochs have long backed mass immigration and Amnesty for illegal aliens. In 2013, they backed the Gang of Eight Amnesty and sponsored a Buzzfeed event to push it. [Koch Sponsors Pro-Amnesty BuzzFeed Event, by Lee Stranahan, Breitbart, May 10, 2013] Trump demolished that agenda in the 2016 Republican primary, but his victory apparently taught the Kochs nothing. Amnesty for so-called DREAMers, illegal aliens who came to the U.S. as minors, remains a major legislative priority: “These are people who have already demonstrated their commitment and contribution to this country—and in 2019 our country can do the same for them,” read a January Koch network email. [Koch Network to Push for Legal Status for Dreamers in 2019, by Philip Elliott, Time, January 2, 2019]

And now the trouble has worsened. Kochtopus support for House and Senate candidates in 2020 will hinge on whether they back Amnesty. To ensure that candidates get the message, the Kochtopus astroturfed a “Latino” lobby called The Libre Initiative to push for Amnesty [New Poll from The LIBRE Initiative Shows Support for Action on Immigration, protecting Dreamers, January 23, 2019], more “guest workers” [AFP, Freedom Partners, and The LIBRE Initiative Applaud White House Plan for More Seasonal Worker Visas, May 7, 2019], and, most recently, to oppose Trump’s plan to stiffen the rules for asylum applications. [Asylum Rule Change May Make the Situation Worse, July 17, 2019]

So Libre’s primary focus is Hispanic ethnic interests, albeit with a libertarian veneer, a fact that nicely segues into what Koch has in store for the Historic American Nation vis-a-vis immigration:

"I would let everybody in who comes here to contribute, and no one who wants to come here to do harm, and see how easy this is. This goes to our whole philosophy of openness. … We have to have an open society—open to ideas, people, goods and services—to learn from each other and have us all benefit.”

[Charles Koch wants a more open border. Immigration is one reason he’s backed away from the GOP, by James Hohmann, The Washington Post, April 3, 2019]

“Contribute” to whom is the question, and Koch’s desire for an “open society” not only sounds an awful lot like an endorsement of Open Borders but also just happens to be what the radical anti-American billionaire Soros calls his outfit.

That said, don’t think Koch cares about immigrants. Cheap labor benefits billionaires like himself, but like all elites, he couches his support in tired clichés. The hard-working immigrant just wants to “contribute” and grab his fair share of the American Dream; only shiftless xenophobes could possibly object.

Forget about hard-working Americans who get the shaft.

Immigration aside, the Koch Empire fought hard for Javanka’s “criminal justice reform.” Despite Koch’s hostility to Trump, his organizations backed the president’s First Step Act, which put hundreds of drug dealers and other dangerous felons back on the streets to ply their deadly trades. [Violent criminals and sex offenders released early due to 'First Step Act' legislation, by Gregg Re, Fox News, July 22, 2019]

And now, Joe Biden, who rightly backed that bill, has been forced to apologize for it.

Koch also wants to “demilitarize” police, reduce criminal sentencing across the board, decriminalize drug possession and other crimes, and make it harder for employers to background check felons. If these ideas are enacted, crime will skyrocket in America and all of us will be less safe. Tough policing and sentencing helped clean up crime in the 1990s, but apparently, libertarian principles don’t include laws and policies that produce safer cities.

Yet Koch’s push for immigration and criminal justice “reform” mustn’t be viewed in isolation; i.e., as Koch’s simply lobbying for his own self-interest, everyone else be damned. Rather, he has aligned himself, again, with the anti-American radical Left. The Koch-founded Americans for Prosperity says it might actually back Democratic candidates who support “free trade” and open borders. So as the GOP cools to that Business First message, the Kochtopus will embrace Democrats. [Koch network opens its doors to Democrats as it expands political engagement, by Brian Schwartz, CNBC, June 6, 2019]

The most troubling outreach in that direction is to Anti-Defamation League, Big Tech, George Soros, and other odious groups and individuals to crush online dissent. In June, the Kochtopus announced it would sponsor an ADL event that would focus on combating online “extremism.” Other sponsors included Airbnb, Pinterest, and Soros Fund Charitable Foundation. [Charles Koch Teams Up With George Soros, Patreon and Airbnb to Fight Online Extremism, by Davis Richardson, Observer, June 11, 2019]

“We’re proud to join these partners in convening researchers, educators, community leaders, and rights activists to understand the tools needed to foster a culture where people help, rather than harm one another,” said Sarah Ruger, the Charles Koch Institute’s mistitled “director of free expression.” And, she added, laughably unaware of the irony, “the question of how we see past differences and respect the dignity of every individual benefits from open and courageous exploration.”

Casey Mattox, the institute’s “senior fellow of tolerance and free speech,” spoke on the panel about “online extremism.” His comments are not available, but the session promised to “address these ideas directly, discussing how we can preserve free speech rights while building online spaces that are safe for everyone.”

Eroding the crucial protections that exist under Section 230 creates a scenario where government has the ability to police your speech and determine what you can or cannot say online. Senator Hawley has argued that some tech platforms have become too powerful, but legislation like this would only cement the market dominance of today’s largest firms.

Those clouds of libertarianish ink regardless, the Kochtopus fully supports Big Tech censorship. And conservatives should just shut up about it. Libertarians are supposed to uphold free speech, but their major patron apparently cares more about political access, Political Correctness, respectability, and, of course, cheap labor, than in protecting dissent or unpopular opinions.

Unfortunately, the tentacles of the Kochtopus continue to squeeze conservatives. Several conservative outlets, such as The Daily Caller, receive the majority of their money from the Koch donor network. Also listed as Koch beneficiaries are the American Spectator, National Review, Reason Magazine, and RealClearPolitics. [Charles Koch Is Funding Rightwing, Pro-Trump Media, New Disclosure Reveals, by Alex Kotch, Sludge, November 21, 2018] Americans for Prosperity is still the largest and most powerful grassroots campaign group on the “Right.” [How the Koch brothers built the most powerful rightwing group you've never heard of, by Alexander Hertel-Fernandez, Caroline Tervo and Theda Skocpol, The Guardian, September 26, 2018] And GOP candidates still covet Koch money.

This alliance with the Leftist Axis of Evil to end free speech for patriots should be the last straw. The Kochtopus has become Middle America’s enemy. Outside of non-intervention and a few fiscal ideas, essentially every recent proposal from the Cephalopod Brain of the Kochtopus would crush the Historic American Nation.

It’s time to learn this lesson—even if the Kochtopus won’t.