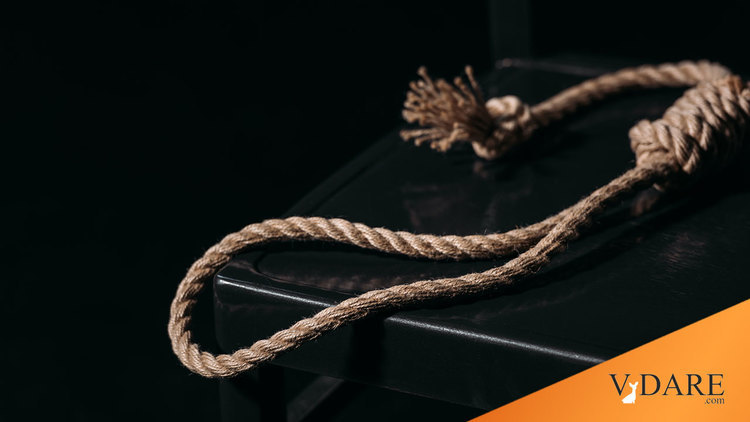 The Jena Six—and Other "Hoax Crimes"

"(S)ome Americans do not understand why the sight of a noose causes such a visceral reaction," declared President Bush to the White House gathering for Black History Month.

As the Washington Post rushed to remind us, President Bush was "responding to news coverage of such episodes as the 'Jena Six.'" [At Black History Month Event, Bush Denounces Noose Displays, By Michael Abramowitz and Hamil R. Harris, February 13, 2008]

But if history is about truth, not myth, that news coverage deserves another look, before the Jena Six enter the history books alongside Emmett Till and "the Scottsboro Boys."

By now, most folks know the media story. White students at Jena High in Louisiana hung nooses on a tree to warn black students not to sit under it. After a fistfight over this racist outrage, black kids in the fight were indicted for attempted murder, while the white racists who hung the nooses walked away with a verbal spanking.

Last September, 20,000 traveled to Jena to march against this prosecutorial outrage. Fortunately, however, there are still a few real journalists around. Among them are Craig Franklin, assistant editor of the Jena Times, whose wife teaches at Jena High, and Charlotte Allen, who wrote an extended piece for The Weekly Standard. According to Allen and Franklin, here are the facts and chronology you have been denied by the Mainstream Media.

There never was a "whites-only" tree at Jena High. Both races sat under it, though whites congregated there. The nooses, or lariats, were the work of three young teens, who got the idea from watching Lonesome Dove on TV, where rustlers are hanged.

Franklin says they were a joke aimed at white friends on the rodeo team. As they were painted in Jena High's gold and black, Allen reports that the kids said the nooses were directed at a rival school's Western-themed football team.

When school officials confronted them, all were remorseful. All had black friends, and none knew the nooses were offensive to blacks.

Far from being let off, they spent "nine days at an alternative facility, followed by two weeks of in-school suspension, Saturday detentions, attendance at Discipline Court and evaluations by licensed mental-health professionals." [Media myths about the Jena 6, By Craig Franklin, Christian Science Monitor, October 24, 2007]

They were not prosecuted for a hate crime because none of those who investigated the incident believed they committed a hate crime. Hung on Aug. 31, 2006, the nooses had been taken down instantly. Only a few students ever saw them. Case closed.

September, October and November passed at Jena High with no racial conflict emanating from the noose incident of August.

On Dec. 1, however, Robert Bailey Jr. tried to crash a party at the Fair Barn in Jena. One Justin Sloan, 22, not a student, put a fist in his face. So witnesses and Bailey reported to police. And Sloan was prosecuted for battery.

On Dec. 2, Bailey and two friends jumped a white male entering the "Gotta Go" grocery. When the latter ran to get a shotgun out of his car, they wrested it from him and took it. So two witnesses at the "Gotta Go" agreed.

Two days later came the "schoolyard fight." Only this was no fight. Black students barricaded an exit to the gym and lay in wait for Justin Barker. As Barker went for another exit, he was struck in the head from behind by Mychal Bell. Multiple witnesses say Barker fell unconscious as a gang of eight or 10 blacks stomped and kicked him in the head. The assistant principal who reached Barker thought he was dead. Barker's emergency room bill ran to more than $5,000.

When the six were arrested and charged with attempted second-degree murder, none of them and none of the witnesses mentioned the noose incident. It had had nothing to do with this vicious racist assault.

After the charges were reduced to battery, Bell, tried as an adult, was indeed convicted by an all-white jury—because no blacks answered the summons to the jury pool.

Why was Bell prosecuted as an adult? Because he had four prior convictions for crimes of violence.

After his conviction was overturned, Bell was ordered retried as a juvenile. Rather than face the same 17 witnesses, he pled guilty in December to hitting Barker from behind, slamming his head into a concrete beam and kicking him in the head. Sentenced to 18 months in juvenile detention, he agreed to testify against his co-conspirators.

While some $500,000 has been raised for the Jena Six defense, its whereabouts is unknown. Bailey did pose on the Internet grinning, however, with $100 bills in his mouth. Bell's mom is said to be driving a new Jaguar, and Bailey's mom a new Beamer. Two other Jena Sixers, Carwin Jones and Bryant Purvis, appeared in rapper attire on Black Entertainment Television as presenters of a Hip-Hop Award.

A week ago, 6-foot, 6-inch Purvis, who had transferred to Hebron High in Carrollton, Texas, was charged with assault, choking a student and ramming his head into a bench.

And that's the Saga of The Jena Six. It belongs right up there with the Rev. Al's other classics: Tawana Brawley and the Duke rape case.