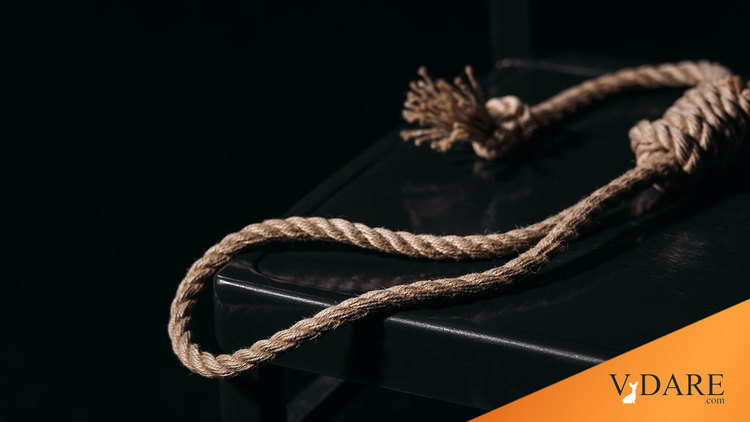 Untethered on the Great Noose Mania of 2007

Quantitatively consistent blogging — relentlessly feeding the beast — tends to be the enemy of quality. There are a handful who can be prolific, steady, and still surprising over many years — Michael Blowhard perhaps comes first to mind — but many of the best bloggers are among the most erratic.

All of a sudden, Dennis Dale is back at Untethered with lots of good stuff, especially about the Noose Scourge sweeping our nation ever since the Jena Six story got all that media play:

CNN's Rick Sanchez, whose Hispanic surname seems to have made him the network's go-to guy on racial issues despite the fact that he is nearly as WASP-like in appearance and manner as Ted Knight's Judge Smails in Caddyshack, (or, for that matter, Knight's affable and clueless anchorman Ted Baxter of The Mary Tyler Moore Show), is valiantly traipsing into the dark heart of America, with his expedition of camera and make-up crew in tow, hunting the now legendary Great Noose Scourge of 2007.

My point here is not to pick on Rick, who evinces the same bemusing persona that Fred Willard periodically reprises in Christopher Guest's faux-documentaries: confident, cocksure and half-cocked—as enthusiastic as he is oblivious. He sees opportunity; he seizes it; he is no exception. But under his guidance the absurdity has moved beyond comic into surreal, and there will be no competing with real life now, my fellow amateur satirists. Soon we may find it difficult to delineate the boundaries between. Game over. It's time to simply shut-up and marvel.

Last night, on Halloween, Sanchez utilized a split-screen format to simultaneously deliver two reports, one from a private residence and one from a bar, each the subject of controversy because their elaborate Halloween displays featured corpses hanging from nooses. As the cameras tightened in on the offending figures to reassure us they weren't black (the report wasn't quite so thorough as to call in forensics to analyze one body, just bare decomposing flesh over a skeleton, which the homeowner assured Sanchez was "Caucasian"), also revealed was a fairly realistic upper torso (safely, reassuringly white), severed at the waist and hanging upside down from a meat-hook, unremarked upon.

I guess you had to be there, but the absurdity of it was riveting, delicious irony: this ghoulish, fetishistic fascination with gore, once a ritualistic, occasional transgression for days such as these, now as widespread and mundane as the dull safety of daily life it mocks, juxtaposed with the bizarre conceit of the segment and its cravenness (acting as a tie-in for CNN's upcoming, opportunistic report, "The Noose, An American Nightmare"), the real-life horrors of the war out of sight and mind; well, all I can say is genius. Pure, unadulterated, unintentional genius.