The Fulford File: “The Frito Bandito Prize”—Reverse Assimilation And The Case Of Edward Roybal

Above: there are a lot of buildings named after Edward Roybal in LA.

I saw this long-forgotten PC flap in a 1980 Playboy magazine. (1980s magazines are a fertile source of historical trivia, but my original intention was just to look at the pictures):

Representative Charles Bennett was asked what he thought about the charge that a colleague, Representative Edward Roybal, was reprimanded for accepting money from Korean interests only because he was Hispanic. Bennett said he didn't even  know Roybal was Hispanic until the  House debate. "It was hard for me to  believe that he was a Mexican." Bennett said. "I thought Mexicans were  short with mustaches." THE FRITO BANDITO PRIZE, March 1980, p. 26 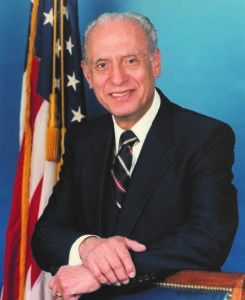 Both Congressmen were Democrats, although Bennett was a conservative Democrat, a species also long-forgotten.

Roybal, born in 1916, was a New Mexican by birth, who moved from there to Los Angeles as a child. Wikipedia says of him that he was born "to a Hispanic family that traced its roots in Albuquerque, New Mexico back hundreds of years, to the Roybals who settled the area before the founding of Santa Fe".

What that means is that Roybal, pictured right, was basically white, i.e.. of Spanish descent, unlike the mestizos and Indians who make up 90 percent of the Mexican population—and an even higher percentage of Mexican illegal aliens in the U.S.. 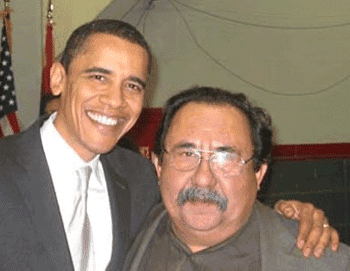 These are people who tend to look like Representative Raul Grijalva, who is indeed short and mustached. (Pictured left, next to the 6’1” former President.)

It's clear that Roybal resented Bennett’s remark, because it shows up in an New York Times story four years later:

WASHINGTON— Representative Edward R. Roybal remembers the incident clearly, and painfully. A fellow Congressman approached him several years ago and said to the California Democrat: ''I didn't know you were a Mexican. I thought all Mexicans were short and fat and wore mustaches.'' Mr. Roybal is a slender man of medium height, and he does not wear a mustache. But he does wear his ethnic heritage with great pride, and he tells the story to illustrate his argument that many lawmakers still know little about Hispanic people, and care little about their feelings. Lately, however, Mr. Roybal has been forcing Congress to pay a great deal of attention to Hispanic concerns. Almost single-handedly, he has led the fight against a bill that would tighten the nation's immigration laws, arguing that the measure would cause discrimination against his people. [More] Roybal Digs In His Heels On Immigration By Steven V. Roberts, June 10, 1984, Emphases added.

“His people”? I thought the Roybals had been in New Mexico since...ah, what he's saying is he is a Mexican, really, like Judge Curiel supposedly wasn't.

The KoreaGate story, if you've forgotten, is basically this: in 1975, Leftist Democratic Congressmen voted to cut off aid to the Republic Of Vietnam (i.e. South Vietnam) with the intention of causing them to lose the war, thus betraying the Vietnamese government, its Army, and a significant part of their civilian population to their deaths. See James Webb's 2003 article "Sleeping With The Enemy" for details, as well as VDARE.com Editor Peter Brimelow's articles here and here.

At that point, the political leadership of the Republic Of Korea (South Korea) became passionately interested in the financial well-being of America's Congressmen, especially Left-wing Democrats like Roybal. Frankly, I don't blame them.

However, Congressmen aren't supposed to take bribes even from friendly foreign governments.

Wikipedia says about Roybal's participation in this bribery scandal that he received a thousand dollars (over three thousand in 2017 dollars) from Tongsun Park, which he failed to report. (He said he forgot.) The House Ethics Committee was going to censure him, but "requests by Hispanic leaders"(as well as from two far-Left California congressmen, Ron Dellums and Philip Burton) led to it being reduced to a reprimand.

Needless to say, his Hispanic constituents didn't care. They re-elected him with 70 percent of the vote.

My point is that that Roybal was on its face the most assimilated Hispanic possible. He was born an American citizen, in a state that had been American since the Mexican War of 1848, three generations before.

He attended an American high school and college in California, learned to salute the American flag, say the Pledge of Allegiance, in a school system where the curriculum was based on American patriotism—but when he went in to politics, he was a hundred percent Mexican.

“After Hispanic leaders requested the penalty be reduced to a reprimand, the House agreed. Roybal saw this not as a personal triumph, but as a victory for the nation's Hispanics, showing their strength when they united behind a cause.”

Well, yes, but in this case the “cause” was Mexican-style corruption, accepting mordida, as it’s known in Mexico, from an agent of a foreign government.

To sum up, the New Mexico-born and Los Angeles-raised Roybal could have been the most assimilated Hispanic possible—his name was actually Edward Ross Roybal, for God’s sake—but in practice, he was the least, a consistent friend to Mexican illegals, employers of wetback labor, and Hispanic rent-seekers. (The bilingual education thing was a disaster for immigrants, but a source of employment for Roybal’s Mexican-American constituents.)

The political influence of the Hispanic lawmakers has been greatly magnified this year by the lively competition in both parties for Hispanic voters, and the widespread belief that these voters could determine the outcome of the Presidential election. (Emphases added).

But it was a really dumb idea in 1984. I guess that’s why they call Republicans the Stupid Party.