Michelle Malkin: Manchester And The Forgotten Slaughters of the Innocents

For now, everyone knows the sonorous name and cherubic face of 8-year-old Saffie Rose Roussos.

She's the littlest known victim of Monday night's jihad attack in Manchester, England. Her doe-eyed image spread as rapidly across social media as the #PrayForManchester hashtags and Twitter condolences from celebrities.

But I guarantee you that beautiful Saffie Rose will evaporate from the memories of those most loudly proclaiming "Never forget" faster than a dewdrop in the desert.

Look no further for proof of the West's incurable terror attack amnesia than the reaction to the Manchester massacre. Reporters, politicians and pundits expressed shock at the brutality of Muslim murderers targeting children and young people.

Labour Party leader Yvette Cooper posited on BBC Live that it was a "first."

"The architects of terror have hit a new low," a Liverpool newspaper editorialized.

U.K. columnist Rosie Millard described the bloody bombing as an "attack unique in its premeditated targeting of the young."

What planet have these people been living on for the past 16 years? How quickly the blind, deaf and dumb virtue signalers forget. 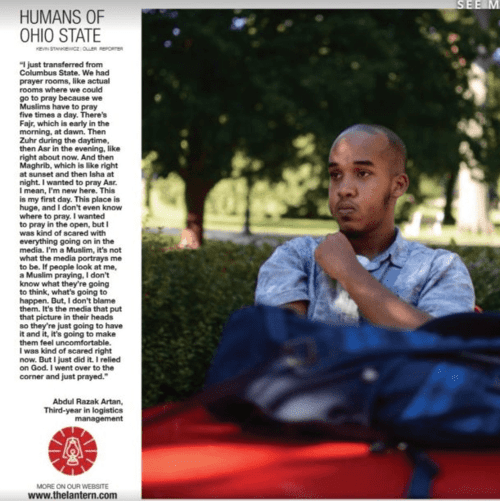 Somali jihadist Abdul Razak Ali Artan (right) plowed his car into Ohio State University students last fall before stabbing several of them. The attack was swept under the rug as the usual, terror-coddling suspects worried more about a nonexistent "backlash" against Muslims than they did about the steady infiltration of refugee jihadis and Islamic extremists at colleges and universities across the country.

In 2004, Islamic baby-killers attacked a school in Beslan, Russia, during a three-day siege that took the lives of 186 young children.

At Fort Hood in 2009, soldier Francheska Velez and her unborn child were murdered by jihadist Nidal Hasan with 13 other victims. Her last words: "My baby! My baby!"

Eight children were murdered on airliners that jihadists hijacked and crashed on Sept. 11, 2001.

Sisters Zoe Falkenberg, 8, and Dana, 3, were headed to Australia with their parents on American Airlines Flight 77.

Bernard Brown Jr., 11; Rodney Dickens, 11; and Asia Cottom, 11, all from Washington, D.C., were also on the Falkenbergs' flight. They were public schoolchildren traveling with their teachers on an educational trip.

An additional 10 pregnant women and their unborn babies died as the Twin Towers toppled. Eight years before, during the 1993 World Trade Center bombing, one pregnant woman and her unborn child also perished.

The Boston Marathon bombing of 2013 injured 263 and claimed three lives, including 8-year-old Martin Richard. Authorities recounted at trial that Martin suffered "visceral pain" in nearly every part of his body as shrapnel—metal, wood, nails and pellets—from the jihadists' pressure cooker bomb ripped into him.

Yes, the same type of sadistic torture bombs suspected of maiming and killing kids and teens in Manchester this week.

Newsflash: There is nothing new or unique about the barbaric soldiers of Allah executing premeditated attacks on our young. History teaches us there is no appeasing the unappeasable. They will not be bought by welfare subsidies, sensitivity programs, college educations or diversity-is-our-strength platitudes. The slaughter of the innocents will continue unabated as long as the West's useless last responders to jihad violence—addled by short-term memories and child-like comprehension of the Islamic imperialism imperative—prevail.