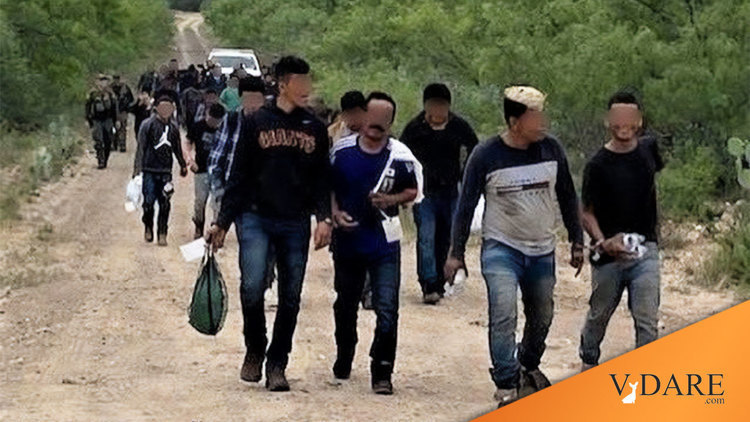 We talk about illegal immigrants a lot here on VDARE.com. A Hispanic marketing executive named Charles Garcia [Email him; follow him on Twitter: @charlespgarcia] wants us to stop.

Last month's Supreme Court decision [PDF] in the landmark Arizona immigration case was groundbreaking for what it omitted: the words "illegal immigrants" and "illegal aliens," except when quoting other sources. The court's nonjudgmental language established a humanistic approach to our current restructuring of immigration policy.

When you label someone an "illegal alien" or "illegal immigrant" or just plain "illegal," you are effectively saying the individual, as opposed to the actions the person has taken, is unlawful. The terms imply the very existence of an unauthorized migrant in America is criminal.

It is illegal—and is usually criminal, see below.

In this country, there is still a presumption of innocence that requires a jury to convict someone of a crime. If you don't pay your taxes, are you an illegal? What if you get a speeding ticket? A murder conviction? No. You're still not an illegal. Even alleged terrorists and child molesters aren't labeled illegals.

That’s crazy—we label those people tax evaders, speeders, murderers etc. And the only question arises is whether they’re guilty or not. But all illegals immigrants are guilty—of illegal immigration.

Garcia makes the usual claim that being a deportable illegal is in some sense not a crime, but a civil matter that can be “adjusted” by a sufficiently corrupt government. (“Corrupt” is my word, not his.)

The important thing to remember about illegal alien status, however, is that it’s not a crime that can be forgiven, but an ongoing offence, like possession of stolen property—the alien is still here.

Also, Garcia claims that saying "illegal" must be an expression of hatred towards Hispanics:

By becoming judge, jury and executioner, you dehumanize the individual and generate animosity toward them. New York Times editorial writer Lawrence Downes says "illegal" is often "a code word for racial and ethnic hatred."[What Part of ‘Illegal’ Don’t You Understand?, October 28, 2007]

Garcia even tries to bring the Holocaust into it, a clear Godwin's Law violation

The term "illegal immigrant" was first used in 1939 as a slur by the British toward Jews who were fleeing the Nazis and entering Palestine without authorization. Holocaust survivor and Nobel Peace Prize winner Elie Wiesel aptly said that "no human being is illegal."

(Curiously, the Israelis do seem to think some human beings are illegal—i.e. illegal immigrants.)

Garcia’s push to eliminate “illegal” is just the latest shot in a years-long drive by immigration enthusiasts to stifle debate.

In the year 2000, I did a column called How To Write About Immigration, Abortion Etc. (If You're Differently Brained), playing off of something John Derbyshire had written for National Review (where he was then employed):  Who Are You Calling "Illegal"?, October 17, 2000. He, in turn, was responding to a column called Event Slams 'Illegal Aliens' by Bart Jones, Newsday, October 15, 2000.

Derbyshire objected to the quotation marks around illegal in Bart Jones’s headline, and wrote:

If you read no further than the headline, you would presume that some event had been held— a public meeting, you could hardly help but infer, since there is an accompanying picture of a speaker on a podium—at which some group of people had been wrongly identified as illegal aliens; had been, in headline jargon, slammed as "illegal aliens."

Who was this group, so unfairly characterized as "illegal aliens"? Well, it was … illegal aliens. The event, held at a local VFW post, was organized by a local citizens group fed up with the presence of hundreds of Mexican day laborers in the town of Farmingville.

I pointed out that this was already becoming the official style, and quoted from the Avoiding Discriminatory Words section Sandra Lamb’s book How to Write It: a Complete Guide to Everything You'll Ever Write:

Illegal immigrants is used to describe people who come to this country illegally, without a passport, visa, or other legal document that entitles them to visit, work, or live in this country."

Be careful in using illegal or alien, because both are offensive…It is better to avoid these negative terms, but use undocumented and without a passport if necessary.

Political correctness increases like a ratchet. The title of my 2000 column came from a line in Spider Robinson’s novel, The Callahan Touch:

“Tanya Latimer is visually challenged-or as she puts it, blind. (She says euphemisms are for the differently brained.)”

But in the year 2012, A Google books search shows that “differently brained” is now used seriously to describe things like Asperger’s Syndrome and autism!

In what fans of George Orwell will consider an act of secular blasphemy, Charles Garcia says

In his essay "Politics and the English Language," Orwell warned that one must be constantly on guard against a ready-made phrase that "anaesthetizes a portion of one's brain." But Orwell also wrote that "from time to time one can even, if one jeers loudly enough, send some worn-out and useless phrase ... into the dustbin, where it belongs" — just like the U.S. Supreme Court did.

But Orwell also wrote 1984, featuring the Memory Hole, for things that the Ministry of Truth, like Charles Garcia, wanted forgotten.

Contrary to Garcia, the concept of “slur” does not apply to illegal immigrants. They are bad people who have done a bad thing, and their presence is a stain on the rule of law. They should be called bad names.

You shouldn’t call people names because of what race they were born, or where. But when a man steals something, we call him a thief. Illegal aliens are stealing something. And no one should be over-sensitive about what they’re called.

The expression “Wetback” is an example—every so often, someone will get in trouble for using it. But illegals are still emerging dripping wet from the Rio Grande every day.

If someone says, during a debate, that they don’t like the term “illegal”, counter by suggesting “scumbags”, “perps”, or “invaders.”

Indeed, I’d like to add another word to this debate. I see by his corporate bio that Hispanic marketer Charles Patrick Garcia is a graduate of the U.S. Air Force Academy who took the American side during the Cold War. He’s half-Irish-American, half-Panamanian, and was born in Washington, DC.

That background gives him about thousand times better chance of being a patriotic American than a Mexican illegal.

But instead Charles Patrick Garcia has chosen to be a quisling.

Vidkun Quisling was prime minister of Norway under the Nazis, infamous because, when his country was invaded, he sided with the invaders. During World War II, the word quisling became synonymous with traitor. (Remember Godwin's Law? Garcia started this!)

Charles Patrick Garcia has decided that his ethnicity—and the money from his Hispanic marketing business—is more important than his country, or the truth.

And if that doesn’t worry you enough, consider that Mitt Romney may choose Marco Rubio for his running mate. In which case, America would have a Vice-President who apparently feels the same way.