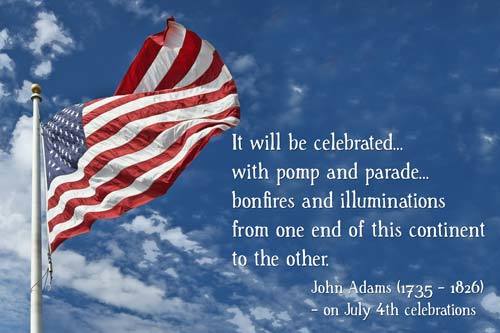 John Adams, discussing the vote that had just been taken by the Continental Congress in favor of independence, said that it

"will be celebrated by succeeding generations as the great anniversary festival. It ought to be solemnized with pomp and parade, with shows, games, sports, guns, bells, bonfires and illuminations from one end of this Continent to the other from this time forward forever more."

(He was writing after the first vote, taken on the Second Of July,1776—a technicality that need not detain us.)

Adams did not suggest Independence should be celebrated by Immigration—and by changing America to fit with the customs and traditions of the rest of the world.

But nevertheless people are saying this. In Eating American on the Fourth of July  [Phoenixville News, July 2, 2008], an Indo-American professional multiculturalist  named Rinku Sen, president of the Applied Research Center, associates multiculturalism with the Fourth of July, on which she is planning to eat tacos, samosas, falafel…and hotdogs, which constitute her entire idea of assimilation. But she also supplies a history of immigration policy which is the usual immigration enthusiast nonsense (1924 cutoff, Operation Wetback, blah blah blah ), and emphasizes the horrible whiteness of previous immigrants.

Could it be that she has been reading VDARE.com? She insists on replying to an argument not often heard, but made in these pages by George Ajjan—that modern technology renders assimilation unlikely. She says:

"Immigration restrictionists argue not only that we need to stop undocumented immigration, but cut back drastically on legal immigration as well. They argue that this economy—no longer industrial but focused on information and service—has no room for masses of poor immigrants.

There's a fear that technology makes travel and communication so easy that new immigrants won't break ties with the old country and reassign their loyalty. To them, the telephone is a dangerous device and communication with relatives a terribly un-American act."

That is correct—and it's a perfectly legitimate fear, borne out not only by the immigrant World Cup fans who throng the streets when real Americans don't even know there's a game on, but more seriously by Al Jazeera-watching jihadists, who may at any moment lose control and kill someone.

Rinku Sen [Email her] goes on to say

"Restrictionists have frozen images of a 'true' America, as though our identity hasn't changed since 1776. Stasis, however, is a fiction. Cultures do not stand still, nor should we want them to. We have the chance now to remake our immigration policy in the modern era, not by taking it back to the 1920's, but by grappling honestly with the fact that the American identity is always undergoing cultural change. Modernity challenges us to create a policy that finally recognizes the full humanity of all immigrants without regard to their racial identity.

"If we are indeed what we eat, Americans are already eating like the world. It's time for our policy to catch up to our palates."

What she's talking about is an immigration policy that will totally remake America, turning whites into a minority. The "Restaurant Rationale" she proposes isn't enough excuse to do it. After all, they could just mail us a cookbook.

Contrast this with another story, from an American-American, about what Independence really means, and what kind of person wants to end it.

"Ironically, the very freedoms we take for granted are being eroded daily, not from outside invasion, but from within. Too many of our 'leaders' are pushing a politically correct agenda that is nothing more than social engineering. Most abhorrent of all, they have no qualms about breaking the law—let alone enforcing it—to achieve their objectives.

"The most blatant example occurred recently at the annual U.S. Conference of Mayors. The Mayors of powerhouse cities Los Angeles, Oakland and Seattle asked their colleagues from across the country to oppose workplace immigration raids, which are operations carried out by Immigration and Customs Enforcement (ICE) with the objective of identifying, arresting and ultimately deporting illegal immigrants, as well as holding companies accountable who employ illegal immigrants." ['Independence' Day? Only If Illegal Immigration Is Stopped, By Chris Freind, The Philadelphia Bulletin July 3, 2008]

That is the Spirit of '76. Pat Buchanan, in his column tonight, talks about the same thing. During the American Revolution, and during the War of 1812 for that matter, there were a lot of American businessmen who were more interested in profit than honor. They supported the enemy, on the claim that surrender would improve trade.

That's the same kind of attitude that these Mayors have to illegal immigration—they think that if they allow immigration enforcement, companies will leave their towns. But they've forgotten why they want employers in their towns in the first place—to employ their own citizens, not random immigrants from Chiapas.

And there are also people who sympathize with the enemy at a higher level. Do you know where that well-known patriot John McCain is planning to celebrate the Fourth of July?

"So the Fourth of July newspapers will have John McCain in ... er, Mexico plotting how to achieve comprehensive immigration reform with Felipe Calderon. ... And some people say the McCain Team has a tin ear!" ... 1:16 A.M.

Yes, it does. Perhaps McCain could make up for it by celebrating Cinco De Mayo in the White House? No, that's been done.

Seriously, Independence Day is a celebration of Independence, of freedom, of sovereignty, of not letting foreign bureaucrats run America.

And. besides that, it's a good time to have a party—with "Pomp, Shows, Games, Sports, Guns, Bells, Bonfires, And Illuminations," plus hot dogs and fireworks!