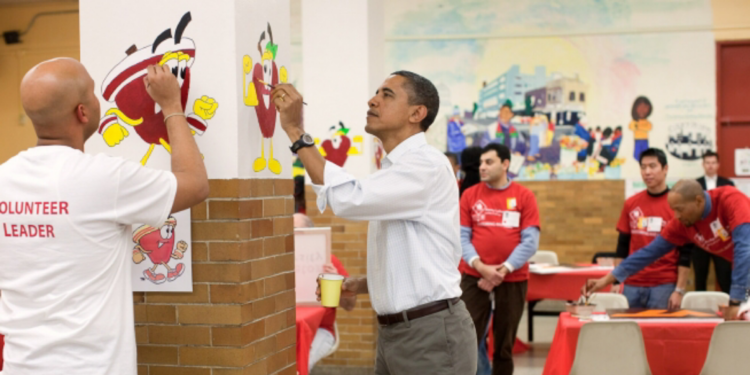 The Fulford File, By James Fulford | Fighting Against Fairness And Justice—The Real Legacy Obama Inherits From The "Civil Rights" Movement

The school the First Couple chose to volunteer in is 84 percent black, which is about average for the District, and slightly better off economically: (The chart is from Greatschools.org. I've complained about its color charts before—logically white, Hispanic, African-American and Asian should be represented by the colors white, brown, black and yellow. But I have finally figured out the rationale behind it! The turquoise color above always represents the largest group, green the second largest, and so on. See the same kind of chart from a high school in the "whitopia" of Burlington, Vermont. The racial proportions are roughly inverted, but the chart colors are the same. Of course, it's still PC stupidity.)

The first half of Stuart-Hobson: Alexander Tait Stuart, born 1848, superintendent of D.C. Public Schools, a boring white man who boringly spent 52 years working for education in the District of Columbia. Dying in 1924, he had school named after him. But it isn't named after him anymore, exclusively, because of demographic changes in the District of Columbia and political changes in America.

The other half of Stuart-Hobson: Julius Hobson (1919-1977) an African-American Marxist civil rights leader, who spent many years working against education in the District of Columbia.

Hobson's biography says that he destroyed educational testing and tracking in the District in the case of Hobson vs. Hansen, as the result of his daughter failing a standardized test.

"[I]rate after his ten-year-old daughter was tested and placed on a non-college preparatory course of classes, Hobson went to court and challenged the District of Columbia schools' practices. He argued that such testing and shunting of students into certain classes violated the 1954 Supreme Court decision that prohibited discrimination in education based on race. With famed civil rights attorney William Kunstler as his counsel, Hobson filed suit against Carl Hansen, superintendent of schools, and a U.S. Court of Appeals judge [J. Skelly Wright, a liberal appointed by JFK] ruled in his favor in June of 1967. The case was a watershed moment for the District of Columbia school system, which ended the tracking system that Hobson argued hampered achievement and academic excellence, and desegregated its faculty and some of the more overcrowded schools as well."

This is what I mean when I said, above, that Hobson spent all this time and money fighting against education. He was fighting against standardized tests, because they gave bad results for blacks. Disparate impact theory means that if blacks fail any test at a higher rate than whites, the test must be prejudiced and wrong.

But the abolition of standardized tests is bad for all students, because it makes it much harder to find out how well (or badly) the teachers union is doing, which in the District Of Columbia is a particularly bad problem. And the abolition of tracking by ability is bad for both smart and stupid students, who should be studying different things at different rates in different classrooms.

Hobson also, in typical community organizer fashion, sued to get more money for his people

"Hobson was a statistician by day, and for Hobson v. Hansen he marshaled reams of data to support his claims that black students were receiving inferior educational opportunities in public education. He won another significant legal victory in 1970, when the same U.S. District Court judge agreed that the district was allocating more funds to predominantly white schools than it was to black ones."

The District did studies to prove that it weren't doing that. But it lost.

Julius Hobson also fought against the Federal Civil Service system, which used to be based on standardized tests because it meant that even when there was individual prejudice against minorities, they could get jobs in the Civil Service if they could pass the tests.

As a young man working his way through college, Thomas Sowell worked for the Federal Government in  DC in 1957-59 after taking and passing the basic Civil Service test. See his autobiography

That system is gone—but it was fair. It got Hobson himself a job in Washington in the late 1940s. (He could pass tests.) But Hobson fought against it, because, as statistician, he didn't like the numerical results.

"Hobson also initiated a legal battle that resulted in important changes in the employment and promotion practices in the federal civil service, changes which gave blacks, women, and Hispanic Americans better access to government jobs."

Typically, that means "better access than they deserved"—see Test Case by Steve Sailer on what "affirmative action" has done to the Civil Service. Steve writes that

"In 1972, a lawsuit claimed that that the [Federal Service Entrance Examination] was biased because blacks and Hispanics didn't score as well as whites on average."

That would have been Hobson.

And that's the story of modern Civil Rights activism—a lot of it involves fighting not for justice, but against it. Did you know that the man whose arrest sparked the Watts riot was guilty of what he was arrested for?

Hobson also campaigned for DC statehood. That would have created a black majority state for the benefit of people who had come to DC to escape States Rights.

I mentioned that Hobson was a Marxist. That's not me being "McCarthyite" (not that there's anything wrong with that). It's in his official biography. He also supported Ho Chi Minh and the Viet Cong in the Vietnam War:

"While Hobson had a very militant profile in civil rights, he worked for world peace and opposed U.S. involvement in the Viet Nam War. He was active in the Anti-War movement and took part in most of the major Anti-War demonstrations, many of which were held in the District. As a result off his Anti-War activities, in 1972 Benjamin Spock asked Hobson to run as his Vice Presidential running mate on the People's Party slate."[Official DC Council Biography, (PDF)]

Which is to say that he was basically a Communist, and wanted the US to be defeated.

The best you can say about this is that he wasn't throwing bombs.

This is the legacy of the Civil Rights movement. Absolutely none of what I've just explained is in any way controversial in Washington, DC.

If Alexander Tait Stuart, who was 16 when the Civil War ended, could be proved to have come from a family that owned slaves, they'd take his name right off that school.

But Julius Hobson is Mainstream. And it's his legacy that Obama has inherited.

All of that turned out to be true. It means that Julius Hobson has won—for now.