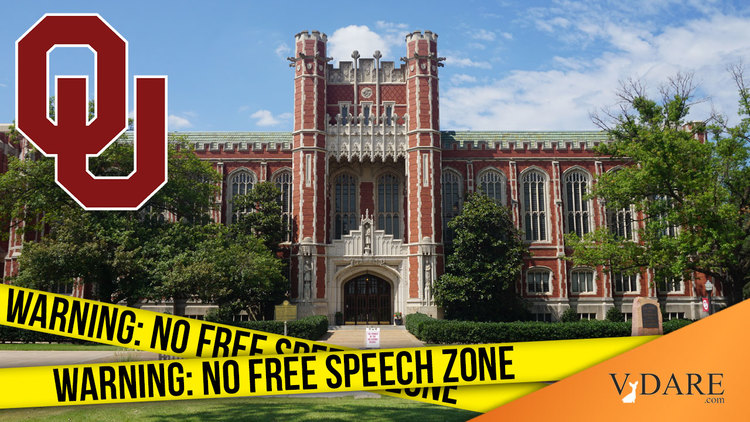 The Fulford File | Boren Goes Berserk Over OU Frat N-Word, But What About Black Frats? They Kill People!

After the video of the OU Frat became public, Eugene Volokh, a law professor who specializes in the First Amendment, wrote in the Volokh Conspiracy blog.

No, a public university may not expel students for racist speech [UPDATED in light of the students' expulsion] March 10 at 11:29 AM

Some Oklahoma University students in the Sigma Alpha Epsilon fraternity were videorecorded singing (as best I and others can tell),

You can hang him from a tree

Oklahoma University president David Boren said, “If I’m allowed to, these students will face suspension or expulsion.” [UPDATE: The president has indeed expelled two of the students.] But he is not, I think, allowed to do that. [More]

Volokh, a free speech absolutist, prints the actual word, with no asterisks. He can do that, as the Volokh Conspiracy is hosted at the Washington Post, although he might be one of the few writers on that website who would want to. VDARE.com can’t, because we’re constantly targeted by “anti-racists” and internet filtering companies who take it as proof that we’re racist and ban-worthy.

A search for the three times repeated phrase on the internet, with the actual word, letter “i” and all, finds that it appears in only 270 places on the internet.

The same phrase, search with a “wild card” where the Deplorable Word goes ("There will never be a * at SAE") comes up with 6.7 million results. Here are some of the variants—I’m not doing the redacting here.

However, that highlights the fact that use of the N-word by whites is something like a modern blasphemy. In a world, and especially on an internet, that has otherwise abolished all censorship, people are frightened of this word.

The joking reference to hanging makes it doubly unacceptable. White are expected to forget black crimes (like the ones we refer to as the Knoxville Horror, The Pearcy Massacre, and the Winchester Atrocity) and not refer to them as black crimes.

All of which has led OU president David Boren to go berserk in his attacks on the white students involved. He’s not only expelled them, in a move both illegal and unconstitutional, he ordered them out of their frat house –their legal residence, where they were paying rent, and refused to let the University housing authorities help them in finding new accommodations.

OU President David Boren ordered all members out of the frat house in Norman by midnight Monday, KOCO reported. Brothers must remove all of their things and find new places — and the school will not help them in their housing hunt.

“We don’t provide student services for bigots," Boren said at a Monday press conference. "We don’t plan to help them."

So as I say, OU President David Boren (email him) is clearly going berserk. OU is responsible for the health and well-being of its students, and making them homeless is irresponsible. The falsely-accused Phi Kappa Phi frat at UVA was surrounded by rioters and had its windows smashed in an episode of unpunished vandalism that Steve Sailer described as “"UVA’s Actual Night of Broken Glass"” The “bigots”, as Boren calls them, could be injured or killed.

Here’s Boren addressing a group of protesters before the expulsion: 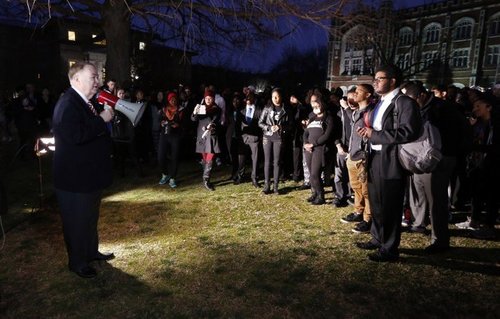 A day before he decided to expel two of the students involved, University of Oklahoma president David Boren offered a scathing condemnation of fraternity members who had participated in a racist chant. But in explaining Monday what he hoped the university would learn from the Sigma Alpha Epsilon episode, Boren referred to his previous career, as a U.S. senator. “I remember when I voted for the Martin Luther King holiday,” he said. “I received about 100,000 letters not approving.”

Boren added that the fallout over the racist SAE video that went viral and the much earlier controversy over the 1983 vote to make Martin Luther King Day a federal holiday are moments that “make us aware that there are still tinges of racism” in America.

What University of Oklahoma president David Boren learned about race as a U.S. senator, By Abby Ohlheiser, Washington Post, March 10, 2015

Boren is claiming credit for defying his constituents over the (questionable) King Holiday here, but of course he was a (conservative) Democrat in the Senate, and thus being subservient to his party. Significantly, Boren was succeeded by a Republican, Jim Inhofe, in 1994, and there are now no more Democrats representing Oklahoma in the Senate.

But back to the hateful fraternity brothers, who wanted to keep their fraternity white. Eugene Volokh wrote in a follow-up post that if you start throwing out people for hate speech, you might have to throw out people who hate anyone:

Black students talking to each other about how all whites are racist, and white cops — and maybe other whites — should get shot? Again, that could be labeled racist and exclusionary speech that, when publicized, can create a hostile educational environment for whites.

Students talking about what a horrible, oppressive religion Islam is, or Scientology is, or Catholicism is, or conservative Christianity is, and how no-one should associate with people who have such evil religious views?

What speech is going to justify expulsion next, if the OU / SAE expulsion is accepted as proper? By Eugene Volokh March 10 at 2:14 PM

Black students don’t get in little cliques in private talking about how they hate white cops—they engage in huge #blacklivesmatter demonstrations and publicly demand exams be postponed because they’re overcome with hate for Darren Wilson and the cop who didn’t have a chokehold on Eric Garner. [Elite law students want their finals postponed because of grand jury decisions. Not everyone is sympathetic., By Abby Phillip, Washington Post, December 10, 2014]

What about black fraternities? Do they ever do racistchants? There are black fraternities, you know, including at OU. [Members of OU's traditionally black fraternities "shocked, but not surprised", By Jordann Lucero, OKCFoxTV, March 9, 2015]. Like “historically black” colleges and universities, they are part of an explicit double standard. They’re not totally racially exclusive—an interview at OU quotes the one white member of Phi Beta Sigma, a “traditionally” black fraternity—but they’re certainly racially aware, as some people like to say.

Alpha Phi Alpha, the country’s biggest black fraternity, released statements on Trayvon, Michael Brown, and Troy Davis, a black who got the death penalty for murder.

Thus Alpha Phi Alpha, which was Dr. Martin Luther King’s fraternity, favored swift retributive justice against the two whites who’d committed justifiable homicide, and lingering doubts and delays on the execution of a black who’d killed a white cop in front of witnesses. As I say, racially aware.

Well, do black fraternities ever chant? Oh boy, do they! It’s called Greek Stepping, and it’s not a secret—this video is from the NAACP awards in the 1990s.

It’s a form of organized dancing and chanting ,with "angular arm movements vaguely reminiscent of "voguing"...synchronized clapping and slapping of the chest and thighs...rhythmic chanting" and the "thunderous sound of syncopated stomping as the performers make tight, interweaving formations with military-like precision." [Stepping Off College Campuses : Art Form of Black Fraternities, Sororities Dances Into Mainstream, Laura Henning, LA Times, April 2, 1993]

Are they engaging in “racist” chants, like the white fraternity brothers? Er, who knows? I find most of the lyrics to Greek Stepping videos completely unintelligible. However, I’ll also note that they look quite Fascist, in the 1930s original sense of organized thuggery. They’re also waving sticks, in many cases, another literally Fascist trope. According to the LA Times, a documentary filmmaker (an African-American of Cuban descent) said that the first time he saw it "I thought they were having a riot."

Is Greek Stepping racist? Well, let’s just say, once again, that it’s racially aware. When a white sorority team entered and won a Greek Stepping competition, the competition judges acted like it was Bush vs. Gore—with no Supreme Court. [Sprite Step Off: In step with the times, or going a step too far? By Neely Tucker, Washington Post, March 4, 2010]. The team was white, not the sorority, which is subject to the Civil Rights laws.

They are encouraging young black men to turn in hazers, and the fact that the mouth pictured is black is because Alpha Phi Alpha is more concerned about saving black lives than about pretending that blacks aren’t doing this.

A New York Times story on the same subject by Tamar Lewin was called Hazing Accusations Against a Sorority, October 5, 2010. (The NYT is not a black paper, so they’re not allowed.)

But “not allowed” or not, the Times does have good reporters, so here’s a useful fact:

Many white fraternities and sororities haze their pledges, too, but there are differences, according to Lawrence C. Ross Jr., author of “The Divine Nine: The History of African American Fraternities and Sororities.”

The white Sigma Alpha Epsilon frat boys were never, of course, going to actually hang someone from a tree—that was a joke, and the last actual lynching in the US was in 1964, according to the Tuskegee Institute. But a branch of Phi Beta Sigma, the “traditionally black” frat that was "shocked, but not surprised", killed a young man at Prairie View, TX in 2009.[Prairie View AandM disbands Phi Beta Sigma fraternity over hazing violations that ended in death, By Michael A. Young, April 20, 2010.

The same fraternity has been involved in other serious beatings—one man was beaten with paddles until he was soaked with blood and his kidneys failed [Former S.C. college student beaten to point of renal failure wins $1.6M in hazing suit, By Nina Golgowski, New York Daily News, April 4, 2014]

Why do African-American fraternities insist on violence towards their pledges? Well, the New York Times story above featured a quote from Courtney Howard, a young woman who was beaten with wooden paddles and wooden spoons over a period of three weeks at San Jose State:

“One of the girls who was a big sister told me it was supposed to be so you can feel what your ancestors went through in slavery, so you will respect what you came from.”