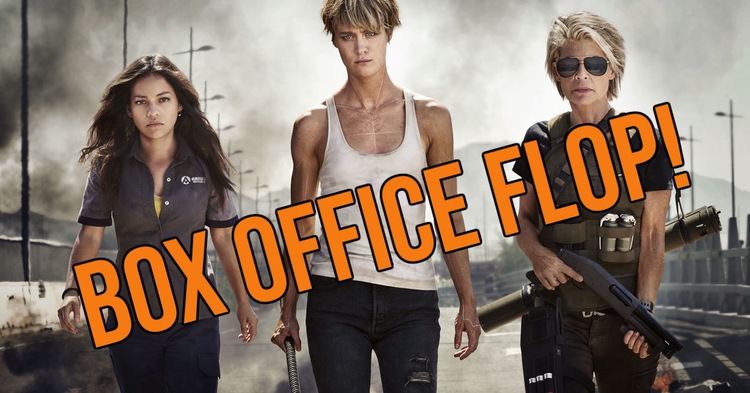 Producer James Cameron and director Tim Miller have, in the latest Terminator epic Terminator: Dark Fate, taken another billion dollar entertainment franchise and driven it into the ground in the name of Social Justice, Hollywood-Style. Here’s how it happened.

The message of the first two Terminator films is in a line from Judgement Day, sequel to the 1984 original: “There is no fate but what we make for ourselves.” Heroine Sarah Connor utters that line in a powerful but regrettably deleted scene from the first film, and delivers this message: We have the power to change the present. The future is unwritten. Unfortunately, the latest installment of the franchise delivers a less optimistic message: You, white man, are doomed. Indeed, Terminator: Dark Fate might well be called Terminator: The Great Replacement.

The Marvel superhero films have been pushing that message as well, and now the latest Terminator adds its voice. Dark Fate, a direct sequel to James Cameron’s ground-breaking Judgement Day in 1991, literally pretends that the events in Terminator 3: Rise of the Machines, Terminator Salvation, and Terminator Genisys never occurred. What viewers get instead is a myth more in tune with our anti-white, anti-male present [‘Terminator: Dark Fate’ Director: Why Mackenzie Davis Will ‘Scare the F— Out of’ Misogynists, by Matt Donnelly, Variety, July 10, 2019].

My advice: Avoid this bomb, which one would hope kills the franchise before it gets any more preachy and ridiculous. For the record, the first two films and Rise of the Machines are an underrated trilogy.

But if you plan to see it, here’s your spoiler alert.

Set three years after the events of Terminator 2: Judgement Day, the saviors of humanity—Sarah and John Connor—live in peace. They didn’t know another T-800 Terminator, Arnold Schwarzenegger’s character that broke the mold 35 years ago, was sent back in time with the mission to murder John, the resistance leader in the post-apocalyptic future.

The second T-800 dispatches John with a shotgun before most viewers have a chance to grab their first handful of popcorn or sip their soda. It’s shocking, and not just because John Connor is killed. Rather, in just a few minutes, the storyline of the first two films is erased.

But that’s what allows director Tim Miller to retune and bring the franchise into harmony with post-white America.

The heroine for mankind’s future is a Mexican named Dani Ramos (Natalia Reyes). Sarah Connor—no longer the mother of the messianic John Connor—shows up to protect her from an advanced Rev 9 Terminator (Gabriel Luna). In this John Connor-less timeline, we learn a form of artificial intelligence was designed to fight cyberwarfare, but took control from humans. Nuclear holocaust was the result. Meanwhile, a white woman named Grace (MacKenzie Davis), cybernetically enhanced by humans in the future, is sent back in time to defend the Hispanic Ramos.

“From the get-go,” one reviewer noted, “this new film is all about diversity: Linda Hamilton’s Sarah Connor gets to say ‘I’ll be back’; there’s a new politicized trans-human lady Terminator, plus a Latina hero and her Latino Terminator nemesis” [Terminator: Dark Fate—Arnie’s back, but he should have stayed away: Review: All the diversity window dressing can’t hide Dark Fate’s inconsequentiality, by Tara Brady, Irish Times, October 24, 2019].

Anyway, the message in the removal of John Connor and his replacement by a Hispanic woman isn’t what one would call subtle. We’re supposed to hear it, loud and clear.

And not just with Connor’s demise. Miller also offers viewers another message in a scene where our three heroines try to cross the U.S.-Mexico border illegally, only to be caught by the U.S. Border Patrol. The villainous robot from the future disguises himself as an agent and tracks them down to one of the agency’s facilities. In the ensuing, bloody fight, cages holding hundreds of illegal aliens are opened and they are freed [In the 1990s, Terminator’s Ultimate Evil Took the Form of a Cop. In 2019, It’s the U.S. Border Patrol, by Chris Klimek, Slate.com, November 4, 2019].

nice piece from @ctklimek on how the Terminator franchise lightly drags the LAPD and CBP for their violent dehumanizationhttps://t.co/572cAjnRMD

Where might Miller have gotten the idea for that scene?

Miller cried when it the scene was filmed. Said Luna, who played the evil Terminator, “I remember that day he shed some tears because what we were doing. Sure, they were background actors—they could go eat lunch, they could leave to go to the bathroom, things like that—but still, there were a lot of people who look like me in these cages, laying on cement floors. He recognized what was happening. He cried a little bit, kind of brought it to everyone's attention, what was actually happening back home, and I appreciated him for that. We don’t make any overt political stances; we just show you what’s happening in the world and you receive it however as you may” [Why 'Terminator: Dark Fate' director Tim Miller cried during filming, by Sofia Fernandez, Yahoo!, November 1, 2019].

If you believe Miller isn’t making “any overt political stances,” I have a bridge over the Rio Grande to sell you.

The fact is, the first two Terminator films, and even the third, were too white. 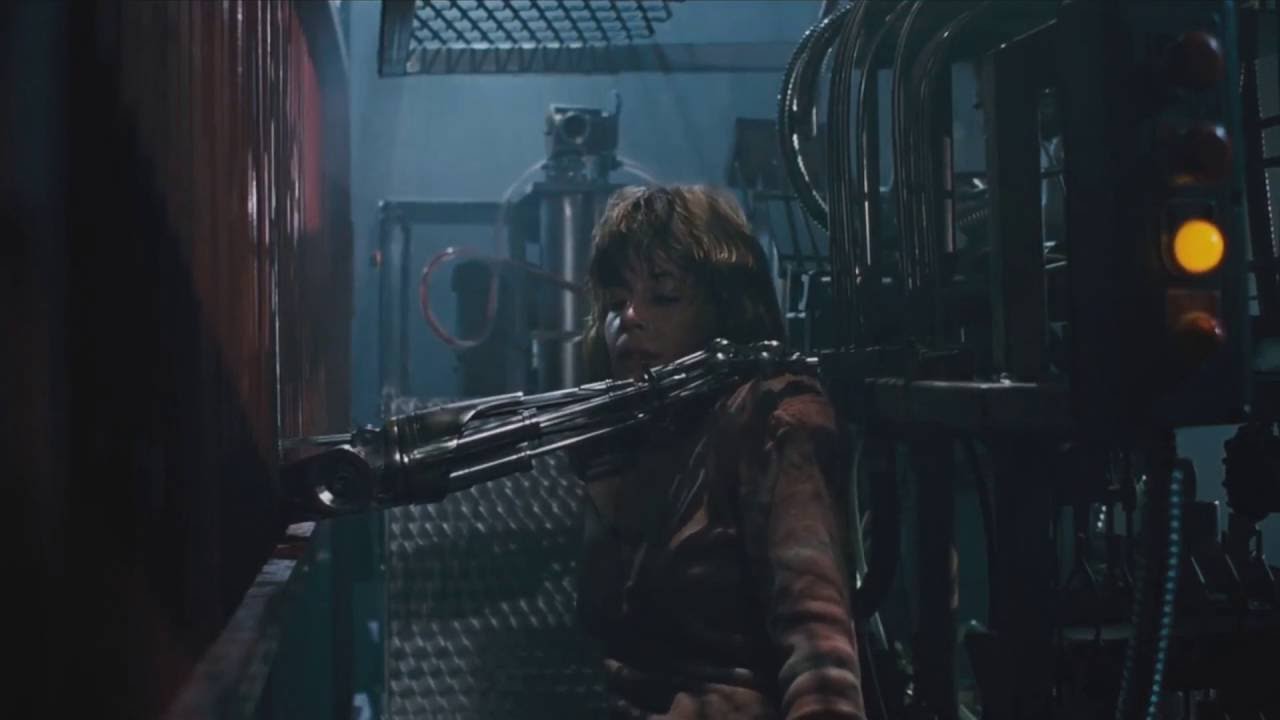 In James Cameron’s original classic,  a robot is sent back in time by Skynet—an artificial intelligence for national defense that has taken over the planet—first to kill a white woman whose unborn white son, John Connor, will save humanity in the future. In the second, two terminators return, both white, one to kill and one to save the teenage Connor.

The first movie shows us a young Sarah Connor (Linda Hamilton). A waitress in a restaurant in early 1980s Los Angeles, the blond-haired, blue-eyed Connor is the mother of the future. Kyle Reese (Michael Biehn), a blond-haired, blue-eyed freedom fighter, was sent back from the future to protect Sarah from Schwarzenegger’s eponymous killing machine. Reese doesn’t know it, but he will become John Connor’s father during an assignation with Sarah on their one night together. Here’s the interesting plot point: John Connor sent Reese back in time.

The Terminator kills Reese, but Sarah famously prevails by crushing the remorseless robot in a hydraulic press.

In the sequel, Cameron inverted that storyline and altered movie-making technologically. John Connor has finally defeated Skynet, but sends another Schwarzenegger T-800 back in time to defend his teenage self from a T-1000, more advanced, shape-shifting robot made of “liquid metal” (Robert Patrick). Sarah is in a mental hospital, having unsuccessfully tried to blow up the company that would create Skynet, which tried to destroy mankind. 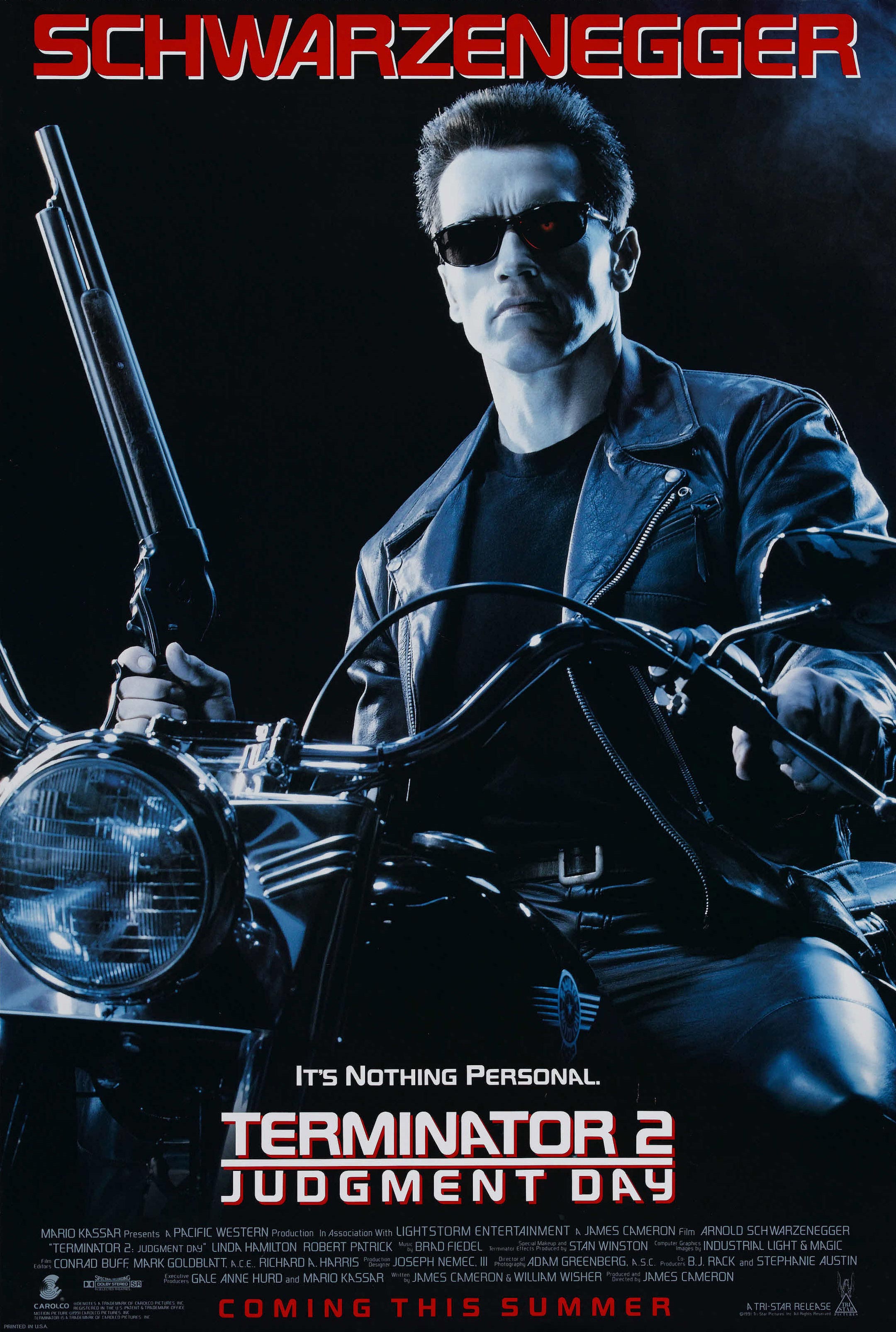 The good terminator and John Connor free Sarah from her psych ward, destroy the technology that would bring about Skynet’s rise, and kill the T-1000 in a riveting finale in which the Schwarzenegger T-800 kills itself.

They are absolutely perfect movies, but of course they lacked the Hollywood diversity propaganda that is redefining our culture with the de rigueur message that straight white men are the bane of existence.

If true, if white men are responsible for all the world’s evils, John Connor certainly can’t be mankind’s hero. So Terminator Dark Fate savagely murders him.

But that storyline has bombed. Badly. That’s not only a huge blow to those poisoning our culture, but also a hopeful sign that opposition grows to our displacement and replacement, whether in fiction or in fact.

In other words, no matter what our cultural elites have in store for our future, the message of the first two films stands: “There is no fate but what we make for ourselves.”