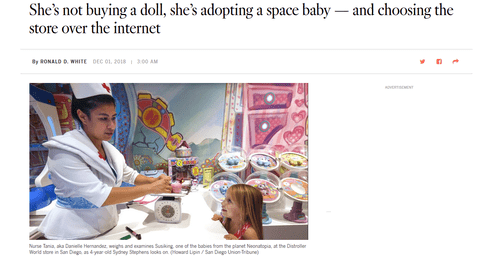 No "Latinx" For This Latina

Outside of movies and alcohol, you don’t hear of much from Mexico in the way of products or brands. But a blonde lady artist in Mexico, Amparin Serrano, has built an impressive new doll brand, Distroller, by coming up with an ultra girly doll experience for little girls that is intended to make them even more nurturing and caring.

Nurse Tania, aka Danielle Hernandez, weighs and examines Susiking, one of the babies from the planet Neonatopia, at the Distroller World store in San Diego, as 4-year-old Sydney Stephens looks on.

For one thing, Mia is just 10 years old. For another, Mia’s baby resembled a pink lacrosse ball with a tiny body attached.

This wasn’t a real adoption. The fictional nurse was an employee of Distroller World, a boutique Mexican toy chain that is about to open its third U.S. store, in Glendale.

“There are no other toys like them,” Mia said of the 12 Distroller babies she has adopted. “At home, we made them a nursery, then I built a little school for them. We even make up voices for them.”

Distroller World is an elaborate example of experience-based retail — where shoppers get to do something rather than just buy something. It’s a style that merchants increasingly are trying out to recapture business lost to the internet.

At Distroller outlets, parents and children are swept up in the story of a planet called Neonatopia, whose 22 different types of babies need adopting.

Once the adoption paperwork is finalized with an employee dressed for the part of Nurse Tania, children follow the arrival of their babies via a “spaceship” that travels around the store via a pneumatic tube. …

The first Distroller World opened in Mexico City in 2004 and was the brainchild of artist and entrepreneur Amparo “Amparin” Serrano.

The idea for the babies came from Serrano’s desire to give her nieces something that would inspire them to be more caring and nurturing, Fillis said.

Here’s one of Serrano’s Virgin of Guadalupe pictures:

Maybe in the future Mexican entrepreneurs, being less weighed down by SJW wokeness at the office, will carve out a niche in the US market providing non-gender neutral toys that make normal boys and girls happy, each in their own traditional gender-specific ways. The marketing slogan could be: “Mexican toys: Not making little children cry on Christmas morning since 2018!”