THE LAST JEDI: Are Whites Getting The Message—That Disney Doesn't Want Them?

See also by Paul Kersey: Red Tails Nosedives and HIDDEN FIGURES Myth Dissolves–It Wasn’t Blacks Who Got America To The Moon, They Actually Wanted To Stop It 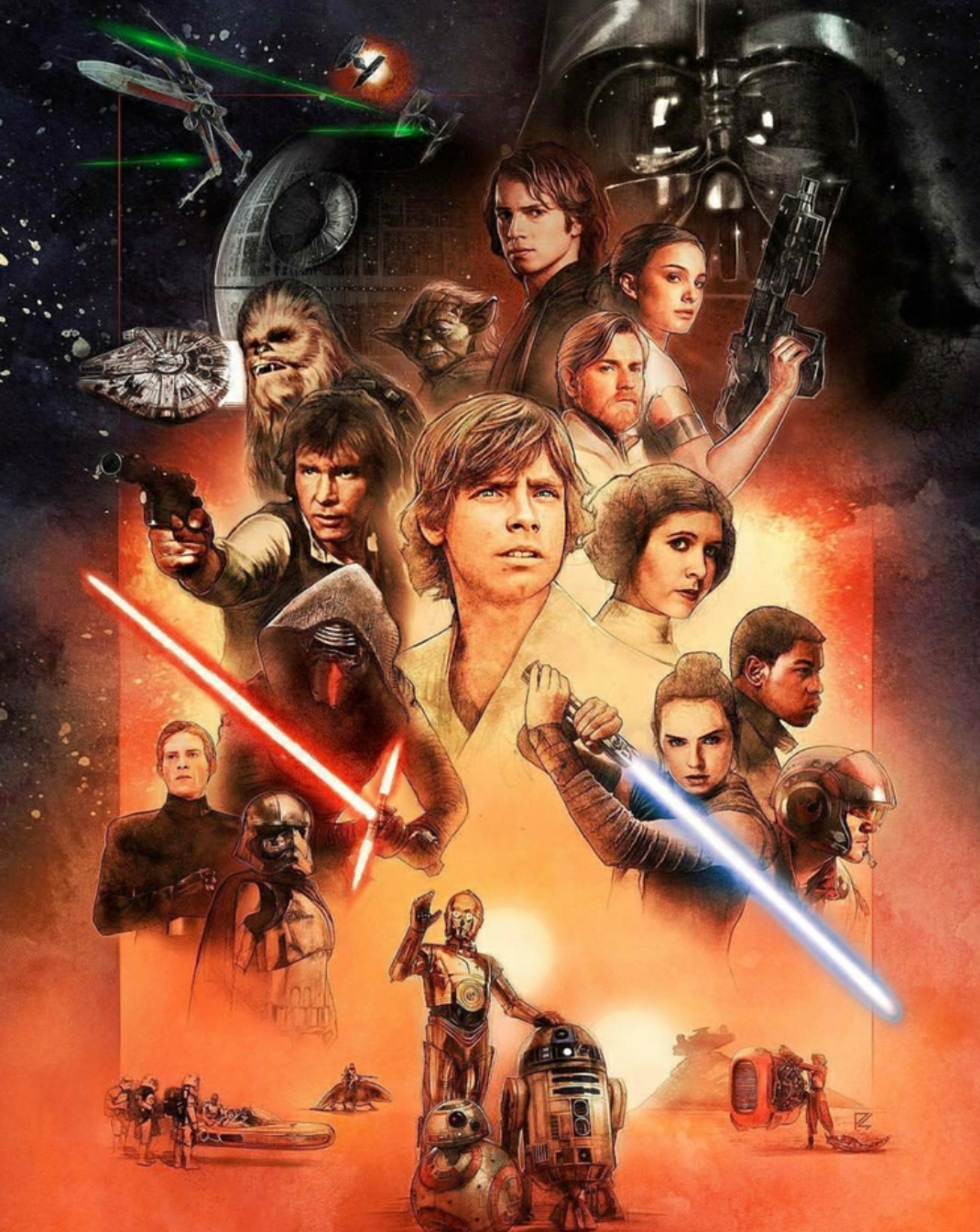 The Left dominates the culture, but it does not (yet) completely control it—hence, for example, the War On Christmas Resistance, Gamergate, and of course the election of Donald J. Trump. Now Star Wars Episode VIII (The Last Jedi), released in mid-December to resounding applause from Main Stream Media reviewers is tanking, well behind the 2015 Star Wars movie The Force Awakens [Fans Speak with Closed Wallets as “The Last Jedi” Now $175 Mil Behind “Force Awakens”, ShowBiz411.com, December 24, 2017]. It may not be a border wall, but it’s something.

According to RottenTomatoes.com, 92 percent of critics loved The Last Jedi, compared an audience score of only 52 percent. the lowest audience score of any Star Wars film. The MSM is blaming the Alt-Right, although this debacle is far beyond the power of a still-nascent movement. ['Star Wars: The Last Jedi': Alt-Right Group Claims They Messed With Rotten Tomatoes Score, ComicBook.com, by Joseph Schmidt, December 22, 2017] Toy sales—which brought Lucas a surprising amount of money for the first Star Wars films—are also tanking. The simple truth: the primarily white fan boys, whose repeat viewings of prior entries in the series drove box office records, just don’t like the new movie. ['The Last Jedi' had a historic $151 million decline in its 2nd weekend at the box office, by Jason Guerassio, Business Insider, December 24, 2017]

Not surprising. An astonishing New York Times article makes clear the anti-white direction the Star Wars franchise is headed, after Disney took over originator Lucasfilm in 2012:

Five days a week, in the foggy hills of San Francisco, 11 writers and artists discuss the minutiae of storm troopers. This is the Lucasfilm story group, and its members hold the keys to everything “Star Wars”: Under their guidance, the franchise’s narratives are linked no matter the platform, whether it’s television, games, theme parks, publishing, merchandise or, of course, film. With their ideas shaping each character and setting, they don’t see themselves as gatekeepers but as partners furthering the stories their creators want to tell. 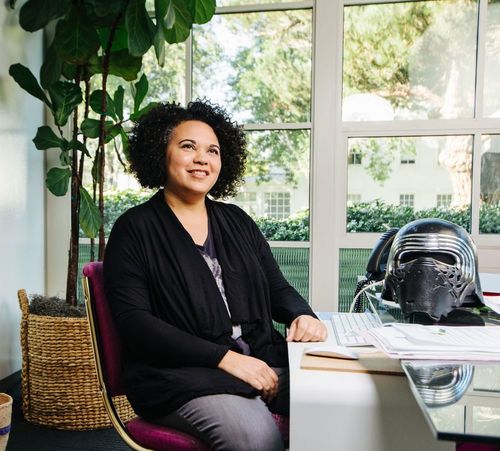 [Disney brand manager] Kathleen Kennedy founded the group in 2012 when she succeeded George Lucas as president of Lucasfilm, putting Kiri Hart [right] a former film and TV writer, in charge of the unit. Ms. Hart’s first move was to make the story group entirely female, starting with Rayne Roberts and Carrie Beck. Both women had experience in film development but had also worked in other arenas — Ms. Roberts in magazine publishing, and Ms. Beck with the Sundance Institute.

The Holt article is nothing more than a celebration of these multiracial SJW commissars and their drive to de-whiten the Star Wars universe: “In addition to maintaining the continuity of the “Star Wars” universe, they aim to increase its diversity. This goal has sometimes led to struggles over their female characters.” Holt exults:

Diversity and racial quotas are now an exact science in the Star Wars cosmology.

“The Last Jedi is so beautifully human, populist, funny, and surprising. I cried when one POC heroine got her moment because films like these leave their mark on entire generations — and representation matters”

Representation does matter, Ms. Yamato, which is why Disney mandated the evil First Order, previously known as the Empire, be cast as almost entirely white males—because we must constantly reinforce white males are the bad guys, right?

When Star Wars first came out in 1977, America was a far different country.  A far whiter country. Back in the days of the original trilogy–Star Wars: A New Hope, Empire Strikes Back and Return of the Jedi, the Rebel Alliance was just as white as the Empire/ First Order. But as the cultural war changed to being overtly anti-white, so the good guys of Star Wars became more diverse and non-white.

Indeed, the multicultural, diverse band of seemingly Social Justice Space Warriors (a pink haired Laura Dern assuming control of the Resistance forces is perhaps a gratuitous embodiment of the Left in 2017) occupying a galaxy far, far away was clearly a primary selling point to MSM reviewers: Star Wars: The Last Jedi Will Bother Some People. Good, by Angela Watercutter, Wired, December 15, 2017]. The message of the new Star Wars franchise since Disney purchased the rights from George Lucas can be distilled into this formula:

The problem with this was very clear in the opening week’s demographics—primarily white males:

And regardless of what these young white men told pollsters, it’s now clear they’re not coming back.

One of the last to understand the new racial hierarchy is Luke Skywalker himself, the actor Mark Hamill. He has very publicly denounced the new direction , saying “I fundamentally disagree with virtually everything you’ve decided about my character.” Obviously, Hamill does not understand that the blond, blued-eyed Jedi Knight he portrayed on film is a unacceptable in our more tolerant, SJW-approved world [Mark Hamill Rips His Role In ‘Last Jedi’: ‘He’s Not My Luke Skywalker’, Huffington Post, by Ron Dicker, December 22, 2017]

Since Hamill’s character told Princess Leia in A New Hope, “I’m Luke Skywalker, I’m here to rescue you,” whiteness has been completely deconstructed to be the embodiment of evil, an unforgivable microaggression itself.

In our more enlightened era, diversity is here to save us, Mr. Hamill. This is why your beloved Luke Skywalker was cast so indifferently in The Last Jedi.  (No doubt wanting to remain employed, Hamill has since groveled: Mark Hamill Regrets Criticizing 'Last Jedi' Version of Luke Skywalker, by Ryan Parker, Hollywood Reporter, December 26, 2017) Stefan Molyneux, one of the more interesting thinkers on the Right (see interview with VDARE.com’s Peter Brimelow), noticed something about Skywalker’s status in The Last Jedi: he’s one of Newsweek’s gloatingly-named Beached White Males:

“So Luke Skywalker has checked out of society—ha, isn’t that interesting? He’s a white male who’s checked out of society. And we see this all over the place with white males, right? I mean, they’re not happy. Neither is Luke Skywalker happy. He’s got this bitter, gristled, half-homeless kind of determination to survive another day but for no particular purpose other than to watch the slow extinguishing of his own possibilities and his own life.”

[Molyneux: The Last Jedi Is About the Oppression of White Men, Patheos, by Ed Brayton, December 20, 2017]

This Star Wars trend, developing for some time, was exacerbated by Trump Derangement syndrome. When Rogue One: A Stars Wars Story was released in December 2016, a month after Trump’s victory, its writers directly said Donald Trump and white people are the embodiment of evil:

In the wake of this week's U.S. election, the symbol of Star Wars' Rebellion had been adopted by many fans protesting the victory of Donald Trump — and now, two of the writers of next month's Rogue One: A Star Wars Story have referenced the relationship between that movie and the current political reality on social media. Chris Weitz tweeted the following Friday morning: "Please note that the Empire is a white supremacist (human) organization." Gary Whitta, the original writer on the project, responded in kind, tweeting: "Opposed by a multi-cultural group led by brave women."

Weitz's tweet followed his praise for this op-ed piece from CBR.com, which explicitly connects Rogue One to this week's U.S. elections, with writer Brett White calling the movie "the most relevant movie of 2016," explaining, "When I look at the Rogue One trailers, I see what I want from America. I see a multicultural group standing strong together led by a rebellious and courageous woman."

White Americans see what Brett White wants from America too. The fact that they seem to be are tuning out and rejecting this message is cause for hope.