Mount Airy, NC, is the site of what may be the latest Immigrant Mass Murder. It was the inspiration for the town of Mayberry on the Andy Griffith Show. You'll note that my headline doesn't say "Hispanic Gunman Kills Four"—all that is "alleged." But he was convicted of some form of kidnapping, served two years, and was released. What I'd like to know is if he's an immigrant, and if so, why he wasn't deported. 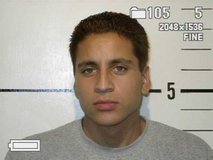 Marcos Chavez Gonzalez was charged with four counts of murder in the slayings late Sunday outside Woods TV in Mount Airy, about 100 miles north of Charlotte, police said.

The town, population 8,700, is the hometown of Andy Griffith and has built a tourist trade on nostalgia for the show that continues to thrive in syndication.

The four were shot in the shadow of a water tower that says “Welcome to Mount Airy” and has a picture of Griffith and Opie, his son on the show.

“This is Mayberry … Andy Griffith’s house is in spitting distance here,” said Michael Wood, one of the owners of Woods TV.