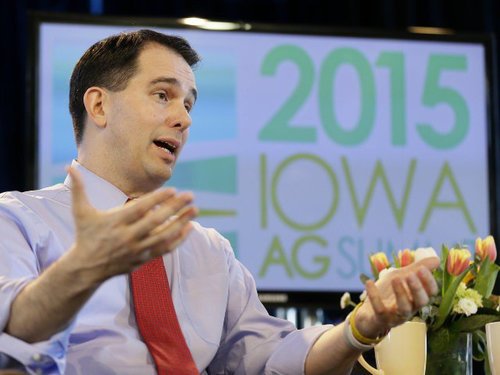 For what it's worth, Scott Walker is turning back towards a solid position on immigration position.  He has a mixed record on the issue, to put it mildly, but the good news here is that he is actually addressing the struggle of the American worker and addressing the problem of LEGAL immigration.

During an interview with Glenn Beck, Walker became the first declared or potential 2016 GOP presidential candidate to stake out a position on immigration fully in line with that of Senate Judiciary Committee subcommittee on Immigration and the National Interest chairman Sen. Jeff Sessions (R-AL). He also noted that he has been working with Chairman Sessions on the issue to learn more about it.

Walker is now the only potential or declared GOP presidential candidate to discuss the negative effects of a massive increase in legal immigration on American workers:

In terms of legal immigration, how we need to approach that going forward is saying—the next president and the next congress need to make decisions about a legal immigration system that’s based on, first and foremost, on protecting American workers and American wages, because the more I’ve talked to folks, I’ve talked to Senator Sessions and others out there—but it is a fundamentally lost issue by many in elected positions today—is what is this doing for American workers looking for jobs, what is this doing to wages, and we need to have that be at the forefront of our discussion going forward.

Walker discussed how in the past he did support amnesty, but says he doesn’t anymore, because he has learned more about the issue. That shows him to be one of the most open-minded GOP candidates on such matters.

Ronald Reagan used to say, "Trust but Verify."  We can't even say "trust" when it comes to any Republican.  However, this is a good sign, especially when leading Republican candidates are following the Jeff Sessions strategy and working directly with Sessions himself.

What separates someone we can count on from someone who offers just rhetoric on the issue?

Walker is doing all three here. Let's see if he stands by his rhetoric.