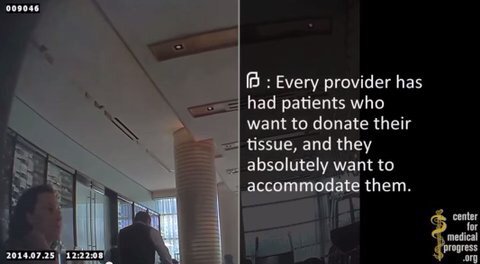 The Wine-Sipping Butchers of Planned Parenthood

Hannibal Lecter ain't got nothing on the profit-maximizing abortion ghoul caught on tape hawking aborted baby parts as she swilled wine and nibbled on a gourmet salad.

Price tag? "You know, I would throw a number out," she babbled breezily as she twirled her fork. "I would say it's probably anywhere from $30 to $100" per specimen.

Nucatola exulted at how fetal livers have become tres chic: "A LOT of people" want them.

She then spoke of the new hot trends in body-parts trafficking as if she were raving about the latest craze for crop tops or artisanal cheese.

"I was like wow," she gushed to her potential clients about the market for unborn baby hearts, "I didn't even know!"

This master of murderous euphemism repeatedly referred to an unborn baby's head as a "calvarium" and casually described the tricks and techniques she and her fellow abortionists use to "increase your chance of success." Rotating the babies so they are delivered breech before being mutilated and slaughtered by the practitioners of Planned Butcherhood works fabulously, in case you were wondering.

Pausing only to swig more luxury libations from her jumbo wine glass, the loquacious death doc explained to investigators posing as fetal tissue company executives how her "providers" use "ultrasound guidance" to target the coveted body parts—"so they'll know where they're putting their forceps."

In a singsong recitation, this lettuce-chomping Mengele in a silk tank top detailed how the "providers" use ultrasound to become "cognizant of where you put your graspers."

This method is not employed to reduce the pain and suffering of unborn baby and mother, mind you. It's to get "good at getting heart, lung, liver, because we know that—so I'm not gonna crush that part. I'm going to basically crush below, I'm gonna crush above, and I'm gonna see if I can get it all intact."

Think about that. Planned Parenthood has officially declared it "torture" for women to see their unborn children through ultrasound before submitting to abortion. The billion-dollar abortion industry has lobbied vociferously against increasing ultrasound access to pregnant women on the fence about abortion.

But when the same imaging technology is used to help Planned Butcherhood's "providers" place their forceps strategically to protect their precious organ commodities, it's invaluable "guidance."

Now you know if you didn't already or if you were in abject denial. Planned Parenthood's fetish for late-term abortion stems not from compassion for mothers, but from the cold-blooded drive to drum up cold, hard cash. The practice has continued for at least 15 years, when Planned Parenthood's human harvesters in Kansas were first uncovered.

Can it get any more stomach-turning? Brace yourselves. This video is just the first in a series by the Center for Medical Progress, which has been investigating Planned Butcherhood's illegal, immoral trafficking of aborted fetal parts for almost three years.

Nucatola is no rogue underling. She's Planned Parenthood's "senior director" of "medical services" with years of scalpel-wielding, hands-on abortion training. She bragged not only about her own expertise in procurement of baby body parts, but about the everyday trafficking that goes on "behind closed doors" at countless "affiliates."

When you've recovered from your nausea, ask yourselves this: What kind of country do we live in where law-abiding businesses are fined, threatened and demonized for refusing to bake gay wedding cakes, but barbaric baby butchers are hailed by feminists, Hollywood and a president who asked God to "bless" them?