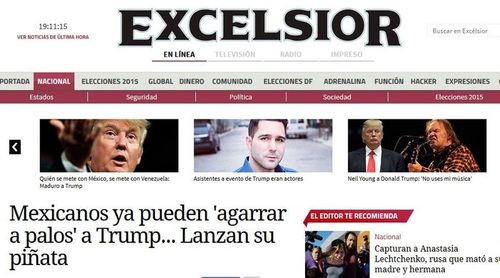 Hate Symbolism: Donald Trump Piñatas Now on Sale in Mexico (And Soon To Arrive to the United States)

They're still going on and on about Donald Trump in Mexico.   In fact, one resourceful entrepreneur has merged the Trump hysteria with an old and famous Mexican custom, and has made a pinata in the form of Donald Trump.   You can see a photo of it below:

A little cultural background is in order.   The pinata is an artistically-shaped container which is suspended midair  on a rope and whacked with a stick until broken.   It is  customarily a feature of Christmas and birthday parties.

Nowadays, however, the pinata could be in any form. You might see a pinata of Bart Simpson, Winnie the Pooh or Spider-man.

Therefore, the form of the pinata may or may not represent a negative personality or character.   In the case of Satan, it does. But if a kid is a Spider-man fan, his parents throw a party with a Spider-man pinata because the kid likes Spider-man.

In the case of Donald Trump, of course, the pinata was produced as an attack on Trump.  According to Mexico's Excelsior (my translation):

After the contemptuous commentaries about Mexico that Donald Trump made, some Mexicans are taking revenge against this politician  close to the U.S. Republican Party that wants to be president.

Describing Trump as "close to the Republican Party" strange.  Trump is a Republican, but he's certainly not part of the Republican In Group, and that's the point of his candidacy.  Anyway....

The people want to break the pinatas, they want to burn them, said Avalos.  People are angry for the hate that Trump feels for Mexicans.

I don't believe that Donald Trump "hates Mexicans".  I believe that Trump opposes what is being done to our country through the Mexican border.   But nowadays, "hate" is the magic word used to discredit other points of view.

The figure of cardboard and paper, available in various sizes and prices, is now on sale at Piñatas Ramírez, in the city of Reynosa [a border city across the Rio Grande from Hidalgo, Texas] prepared so that children and adults can burst it with sticks on birthdays and celebrations.... Mexicanos ya pueden 'agarrar a palos' a Trump....Lanzan su piñata, Excelsior, June 19th, 2015

Fox News Latino (because after all, Latinos must need their own news source) has some additional information:

Avalos Ramirez, who lives and works in Reynosa, Mexico said Mexicans on both sides of the border are quite angry at his comments and are embracing the new piñata gladly.  He has sold five piñatas since he put out the first one on Wednesday [June 24th], he said. He has also in talks for a bulk order of 50 Donald Trump piñatas for a customer based in McAllen, Texas.

So, it's going to be for sale on the U.S. side of the border.  Interesting.

In its most basic version, the Trump piñata goes for 500 pesos, or $40.   “It’s something metaphoric, people bashing him for the comments he made,” he told Fox News Latino over the phone.   “We thought [Trump's comments] were very wrong because we are a working country, we go to the United States to work, but unfortunately we face a lot of racism,” he added.

So they "face a lot of racism" in the United States, eh?   Yet they still want to go there, why?

Dalton Avalos ought to thank Donald Trump for providing him with a gimmick that is increasing his profits.