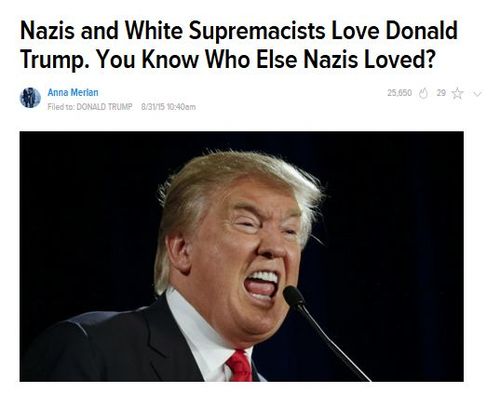 The important thing to remember about the Gawker media network is that the writers don't actually put forward ideas in the traditional sense. The entire enterprise is built on signaling, displaying social cues about what a person is expected to think, say, or feel if they are to fit in with other progressives. They don't have ideas more complex than a hashtag. This is why every article is essentially an extension of someone saying, "Wow just wow."

You can't argue with them. It would be like trying to discuss politics with a dog. Like dogs, they are only capable of instinctual responses based on primitive incentives.

When we last heard from Anna Merlan of Jezebel, she was non-apologizing for promoting the obvious UVA rape hoax, and then doubling down by accusing VDARE.com of denying the Holocaust. And now, the gossip site Jezebel is once again displaying this dumpster fire before a horrified public.

Like the other replaceable members of her caste, Merlan is triggered by Donald Trump and gives a mention to your humble scribblers here at VDARE.com:

[T]he virulently anti-immigrant VDare is also on board, praising Trump as an“immigration patriot” and claiming in July that a “political and economic terror campaign” is being waged against him, one that somehow hasn’t prevented him from polling well and participating in national debates.

Remember, "immigration patriot" goes in scare quotes, but in Gawkerland concepts like "bodyshaming" and "pansexual" must be taken very seriously.

Of course, the whole point of Trump is that he's gone off script by defying efforts at economic intimidation and social shaming. The way our system currently works is by economically and socially isolating and destroying those who utter officially unapproved opinions—even (in fact especially) if those opinions are widely shared.

As a billionaire (as Trump constantly reminds us) and as someone who appears to have been preserved in the cultural norms of the 1980s, Trump is an outlier, especially among the extremely wealthy. While the likes of George Soros toss some shekels at their agency free mascots in the Black Lives Matter operation and Sheldon Adelson openly declares his indifference towards this country, Trump is a rich person who actually seems to have some kind of emotional loyalty to the United States. He believes immigration should serve the interests of currently existing American citizens.

This is supposed to be ordinary and expected. In today's degenerate times, it is revolutionary. And Trump is doing what quite literally no one else could—defying the shills who defend the status quo.

In short, Trump is polling well not just because of his position on immigration, but because people are tired of journalists whining. A vote for Trump is perceived as a vote against the media.

And so the more clickbait generators like Merlan who oppose him, the more support he picks up.