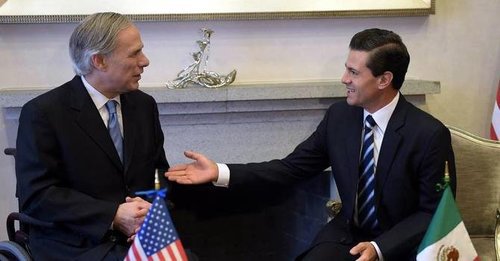 One of Republican frontrunner Donald Trump’s most popular lines is that “our leaders are stupid” and other countries are taking advantage of us. And in related news, the governor of Texas, Republican Greg Abbott, just visited Mexico and was bamboozled on Mexican immigration.

First question: why there is a Texas state visit to Mexico anyway? After all, the U.S. Constitution says

The Congress shall have Power….. To regulate Commerce with foreign Nations….. (Article I, Section 8)

No State shall enter into any Treaty, Alliance, or Confederation…..No State shall, without the Consent of Congress…enter into any Agreement or Compact with another State, or with a foreign Power, or engage in War, unless actually invaded, or in such imminent Danger as will not admit of delay. (Article I, Section 10)

Answer: that no longer stops state governors of both parties, like Governor Jerry Brown of California, from carrying on their own foreign policy.

For example, when Abbott left for Mexico, the Dallas Morning News warned On first official visit to Mexico. Gov. Abbott must balance politics, diplomacy [by Alfredo Corchado and Brandi Grissom, September 5, 2015]. The writers solemnly discussed California, Arizona, New Mexico, and the Lone Star State itself, and their “relations” with Mexico. But why should a U.S. state have “relations” with a foreign country? And if states can have their own foreign policies, why are they blocked from enforcing federal immigration law?

Abbott was expected to face a hostile reception. He has been criticized in Mexico for his attempt to beef up border security, and of course the government of Mexico is involved with the birth certificate dispute. Additionally, there’s the general anti-Trump rhetoric south of the border.

Texas and Mexico share more than a border; we are connected by commerce, culture and family. As I travel to Mexico this week—my first international visit as governor of Texas—I look forward to continuing my dialogue with Mexican officials to improve bilateral relations, expand our long-standing trade partnership, discuss obvious challenges like immigration and water, and ultimately expand economic prosperity for families on both sides of the border. Texas exports more goods than any other U.S. state, and Mexico is our top trade partner by far.

Our history is strong. Our working relationship must be stronger. That is why Mexico is my first international visit as governor of Texas. Working together, we will build an even better future.

Is this much different from California’s Governor Gray Davis’s infamous declaration, during a similar 1999 visit to then Presidente Zedillo, that California and Texas would form “one magnificent region.” Perhaps border governors aren’t really running their own foreign policy, but are simply trying to be annexed to Mexico. [California Shows Creative Politics On Immigration, By Georgie Anne Geyer, Chicago Tribube, August 20, 1999]

Abbott’s visit unmistakably resembled a trip by a head of state (not merely the head of a state): meetings with the Mexican President, other Mexican officials, and business leaders. There was even a luncheon on September 6th with Mexico’s new foreign minister Claudia Ruiz Massieu Salinas, described as a “first step” to build this constitutionally-dubious Texas-Mexico relationship.

Naturally, all but one of these meetings was closed to the public [Abbott’s meeting with Mexican president stresses the positive as trip wraps up, by Alfredo Corchado, Dallas Morning News, September 9, 2015].

Luckily Abbott gave us a glimpse inside these meetings.

Gov. Greg Abbott said Monday [the 7th] that the most “pleasant and biggest surprise” during his three-day visit with high-ranking Mexican officials was hearing their willingness to help Texas secure the border. In a brief interview with Texas reporters, Abbott said he’s been impressed with how, “behind closed doors, Mexico has shown great support for securing the border.” “In all my talks with all Mexican officials, no one has said anything negative about what Texas has done on the border,” Abbott said. “To the contrary, they have talked about ways in which they can better secure the border and better collaborate with Texas.”

Is this guy for real? I don’t doubt that Mexican officials told Abbott all this. But where’s the evidence they actually mean it?

Central Americans and other illegal border crossers are also breaking Mexican law. But why should they care when even the Mexican government doesn’t follow its own laws?

For years, the Mexican government has, in various ways, encouraged emigration of Mexicans to the USA as part of a deliberate strategy to reduce stress at home and maximize influence abroad. For Abbott to say Mexico wants to secure the border means, at best, that he was hoodwinked.

It gets worse. After more meetings, Texas signed agreements with Mexico in the areas of education, transport, the border and energy [Firman Mexico y Texas instrumentos de cooperacion, by Ivan Saldana, Excelsior, September 9, 2015].

Also as part of the visit, Southern Methodist University, located in Dallas, launched a think tank, the “Texas-Mexico Program”, “to research and promote policy-based discussions on economic, political and social ties.” It’s backed by a $1 million donation from “Gruma-Mission Foods, a Mexican corporation based in Dallas” Gruma chairman and CEO Juan Antonio Gonzalez Moreno ambitiously declared that the program would cover

Economics, energy, migration, culture, human capital, internet technology and cyber security are obvious topics for study, but the door is open. We found in this program a tremendous opportunity to build a foundation for what should become the primary think tank on Texas-Mexico relations

And SMU Director of Programs and External Relations Luisa del Rosal enthused “In the end I hope this program will change perceptions about Mexico and about just how integrated both sides are.” [SMU launches Texas-Mexico Program during Gov. Abbott’s visit, Dallas Morning News, September 8, 2015]

Anybody care to bet the think tank won’t promote Open Borders and globalism?

On his last day in Mexico, Governor Abbott met with Mexican President Enrique Pena Nieto (who, on a visit to California, called the Golden State “the other Mexico”).

At their meeting, Abbott and Pena Nieto hammed it up, exchanged gifts, and talked about having a more secure border. Presidente Pena Nieto

highlighted to Greg Abbott the importance of the contributions of the Mexican community to the United States and emphasized the necessity of advancing in the adoption of policies on the state level that permit a greater integration of the immigrant community to Texas.

Yet again, another American governor—in this case a “conservative”—is making deals with Mexico. It’s neither constitutional nor prudent—as Trump has told us, their leaders are “cunning”.

Governors should leave relations with Mexico to the federal government. Hopefully, come 2017, we might actually have a president who has American interests at heart.