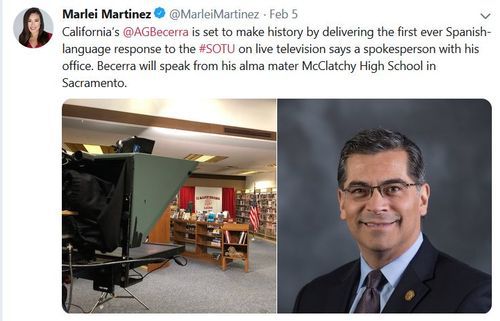 Stacey Abrams, the hard-Left black Democrat who almost won the governorship of Georgia—and might win next time, given Georgia's demographic changes—delivered the Democrat answer to President Trump’s State of the Union speech. But at least her answer was in English.

Most American viewers probably didn’t know it, but a certain demographic heard another answer in a different language. The speaker: California Attorney General Xavier Becerra. The language: Spanish.

Why, you might ask? Aren’t all citizens supposed to understand English? Was Tom Brokaw right when he spent days on his knees in sackcloth and ashes for uttering the heresy that Hispanics must assimilate?

Becerra actually told the NBC affiliate (talking to reporter Marlei Martinez, right) in Sacramento why he thinks a Spanish SOTU response is a good idea:

You want all Americans to have an opportunity to know what their leaders are doing and saying. The fact that now, live in Spanish, those who may not be able to catch everything so well in English, have this opportunity in Spanish, I think is phenomenal. …. This is another way that we can make sure that we have an informed electorate.

So the Spanish-language SOTU is for Spanish-speakers “who may not be able to catch everything so well in English”? Shouldn’t citizens—meaning voters—know the language of the country they live in?

Apparently not, given that Democrats and Republicans have given these speeches for years.

Becerra’s “Spanish language response” was not, technically, a response. He recorded it beforehand at a school in Sacramento and released it before Trump spoke. [California Attorney General Vows To Sue If Trump Uses Emergency Powers To Build Wall, by Meg Anderson, NPR, February 5, 2019]

But of course, Becerra didn’t need to hear Trump’s SOTU. He and California’s government would oppose anything Trump said, particularly on immigration.

So let’s see what Becerra said. Just because we are English-speaking Americans doesn’t mean we should be excluded from it. After all, maybe, just maybe, we have a say in America’s future as well.

The Spanish text is here. And there is even an English language translation available here.

Becerra had this anti-Trump immigration message:

How can it be that what defines the state of our country in 2019 is the shutdown of the government by President Trump? And not only once, but perhaps a second time in the coming weeks. Who would believe that the state of our union would be propelled by President Trump’s extravagant obsession to build a wall on the border that not even the experts want? The President no longer even repeats his promise that Mexico will pay for the thousands of millions of dollars that the wall would cost. …

If President Trump wanted to seriously advance comprehensive immigration reform, including border security, Democrats have been and will be ready. But closing our government—and leaving hundreds of thousands of workers without work or pay—is not the way to do it.

“Extravagant obsession?” That’s a strange way to describe it. But after all, this is from the Attorney General of Sanctuary California. Not exactly a reliable source.

As for it being a wall “that not even the experts want,” not all “experts” agree. The opinion one gets depends upon whom one asks.

You might recall that CNN killed a segment  from an affiliate in San Diego when it learned the local reporter would report that border agents say a wall works. [CNN requests KUSI for local view on the border, declines our reporter after finding out wall works, by Mike McKinnon III, KUSI, January 10, 2019] 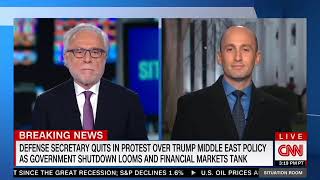 Democrats say they support border security. But as Trump’s aide Stephen Miller so aptly asked Wolf Blitzer in an interview a few months ago:

Becerra and the rest of the Pelosi-Schumer Democrats oppose a wall not because it won’t work—but because it will.

Back to the Spanish-language SOTU. Becerra went on:

And the idea of declaring a state of emergency on the border when one doesn’t exist, in order to justify robbing funds that belong to the victims of fires, floods, and hurricanes, to pay for the wall is not only immoral, it is illegal.

Here we go again with the supposed “immorality” of the wall, with the added touch that it’s also illegal. Of course, Becerra didn’t cite any law that prohibits building a wall … because there are  none.

In fact, the treaties that established the U.S. -Mexican border, Guadalupe-Hidalgo in 1848 and Gadsden Purchase a decade later, say either country can fortify the border.

Becerra warned: “We are ready to reject this foolish proposal, in court, the moment it touches the ground.”

Actually, the Trump administration is expanding medical options for veterans, who, in the main, likely support a wall. In any case, no one has suggested taking money away from veterans to build a wall.

Becerra also claimed: “They're also building a wall between parents and their children, by putting children in cages that separate them from their families.” This is an overheated response to the Trump Adminstration’s efforts to stem the tide of illegals who use their children (and other children) as shields.

Note that Becerra makes no distinction between legal and illegal immigrants.

The other "wall" was  the real point of Becerras’s speech: Trump’s supposed attack on Latino Power.

“They are putting a wall between you and the voting booth,” Becerra lied. “But I have news for you here,”

They failed! During the November elections, Latinos, especially young people, came out to vote in historic numbers! Thank you! …

Friends, believe me, we can bring down walls with our hands. More than that, we have already done it!

How? When? You don’t believe me?

With your votes last November, you changed the composition of Congress. The votes of congress members the President relied on, he no longer has them. Now, he has to learn to govern in a democracy.

He can no longer ignore the Democrats. That is why he doesn’t have his wall.

Your vote in November changed the votes in Congress. And that has changed the politics of our nation.

Then came the raw appeal to the power of the Latino vote—they’ll win by sheer numbers:

Our system of government rewards whoever participates. And with 66,000 Latino citizens reaching 18 years of age, the voting age, every month, we have many hands to reward [emphasis added].”

The agenda? It’s quite different from what the GOP Hispanderers tell us Latinos want.

Imagine if we had the power to decide this nation’s political agenda.

Medical care for your family that politicians can’t take away from you: Check!

Salaries with benefits and protection on the job: Check!

Better laws to protect our families and our police from the violent use of firearms: Check!

Permanent protection for the Dreamers: Check!

Laws to protect the water we drink and the air we breathe: Check!

And comprehensive immigration reform to fix our broken system: Check!

Who’s we? Hispanics, that’s who. And that last line from Becerra would mean more chain migration, maybe more legal immigration from Latin America, and another massive Amnesty far greater than the disastrous Reagan amnesty of 1986.

Becerra also boasted about his lawfare against Trump, including victories for DACA: “We fought and won for 700,000 young people.”

Indeed, Becerra says he has sued the Trump Administration 45 times on behalf of Sanctuary California. And why the legal war for DACA?

[B]ecause as a son of immigrants, I saw my parents struggle and I witnessed all they had to pass through. I believe that the DACA beneficiaries are going to be the best leaders that the United States will have. … It’s very personal. … Everything I do is based on how I grew up. I defend the immigrants with passion because I saw immigrants every day of my life. I know how hard they work. ... when somebody hits an immigrant, he is hitting my father and my mother.

So, for Becerra, immigration is personal. He doesn’t care whether it’s legal, or what other Americans think about it, or how it affects the country to which his parents came: as he says, ”Everything I do is based on how I grew up.”

The sad thing for Becerra’s parents’ generation: when their children get finished, the country will be dramatically poorer and less stable than the one that attracted them.

Given what Becerra  has done based on how he grew up, our own Federale argues that the federal government should arrest Becerra for conspiracy to violate federal immigration law.

Fat chance. That means immigration patriots must back Trump.

And the GOP sinecures on Capitol Hill need to know that, if they don’t help the president build a wall, they’ll find themselves up against one come the 2020 primaries.