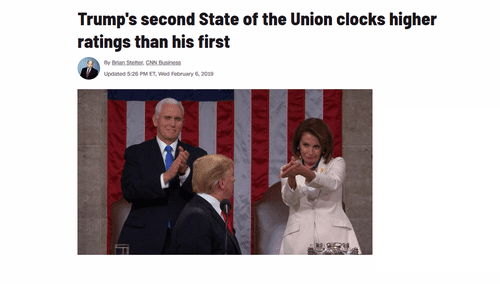 Patrick J. Buchanan: Has Trump Found The Formula For 2020?

If the pollsters at CNN and CBS are correct, Donald Trump may have found the formula for winning a second term in 2020.

His State of the Union address, say the two networks, met with the approval of 76 percent of all viewers—97 percent of Republicans, 82 percent of independents and 30 percent of Democrats. Seventy-two percent agreed with the president's plans for securing the border with Mexico.

Trump was not only unapologetic in defense of his wall. He seemed to relish savaging the rising radicalism of Democrats on two critical issues many Democrats have, since their 2018 triumph, seized upon: abortion on demand, right up to the day of birth, and soak-the-rich socialism.

"Here, in the United States, we are alarmed by new calls to adopt socialism in our country," Trump thundered. "America was founded on liberty and independence—not government coercion, domination, and control. We are born free, and we will stay free."

"America will never be a socialist country," Trump roared, as the camera focused in on the scowling face of Sen. Bernie Sanders.

The GOP ovation was thunderous, the Democratic silence revealing. Understandable. For, as in the 1972 Nixon landslide, Democrats appear to be coming down with "McGovernism."

Alexandria Ocasio-Cortez, the rookie sensation in Nancy Pelosi's House, has called for a U.S. income tax rate of 70 percent. As California and New York City have state and local tax rates of 12 percent that are no longer deductible on federal taxes, their most successful residents could be forced to fork over four-fifths of all income every year in taxes.

Some Democrats have called for an 80 percent federal tax rate. New Yorkers who earn $1 million a year would be allowed to keep less than a dime of every added dollar they earn.

Sanders would impose a 45 percent tax on all estates over $3.5 million, rising to 77 percent on estates worth $1 billion.

To ex-Mayor Mike Bloomberg, a potential rival in the presidential race, whose New York is witnessing an exodus of its wealthy to Sun Belt states, Warren's ideas represent a gospel-of-greed stupidity.

Says Bloomberg: "If you want to look at a system that is not capitalistic, just take a look at what was perhaps the wealthiest country in the world and today people are starving to death. It's called Venezuela."

Democrats have also embraced the cause of "Medicare-for-all."

Asked how private health companies that now insure 177 million people would fare under her health care system, Sen. Kamala Harris was dismissive: "Let's eliminate all of that. Let's move on."

Recalling the celebration, as Gov. Andrew Cuomo's guarantee of abortion rights up to the moment before birth became law, Trump declared:

"Lawmakers in New York cheered with delight upon the passage of legislation that would allow a baby to be ripped from the mother's womb moments before birth.

"These are living, feeling, beautiful babies who will never get the chance to share their love and dreams with the world.

"And then, we had the case of the governor of Virginia where he stated he would execute a baby after birth. To defend the dignity of every person, I am asking the Congress to pass legislation to prohibit the late-term abortion of children who can feel pain in the mother's womb. Let us work together to build a culture that cherishes innocent life.

"And let us reaffirm a fundamental truth: All children—born and unborn—are made in the holy image of God."

Has any president, in any State of the Union, made a stronger statement in defense of life?

Are Democrats losing their minds? Only 13 percent of Americans believe in letting babies be aborted up to and through the ninth month of pregnancy. In what states are infanticide and socialism winning issues?

In this writer's home state, Virginia, the resignation of Democratic Governor Ralph Northam, for "racism," is being demanded by state and national Democrats, because he put on blackface for a Michael Jackson imitation at a dance 35 years ago.

Democratic Lieutenant Governor Justin Fairfax, whose ancestors were slaves on the Revolutionary War plantation of Lord Fairfax, has been accused of raping a young woman at the Democratic convention in 2004.

The next in line to succeed the governor, the attorney general, also a Democrat, has just admitted to wearing blackface when he was in school.

And Sen. Warren, says The Washington Post, listed "American Indian" as her race on a State Bar of Texas registration card in 1986.

Yet, according to her DNA and the Cherokee chief, she ain't one.

Somebody up there likes Donald Trump.