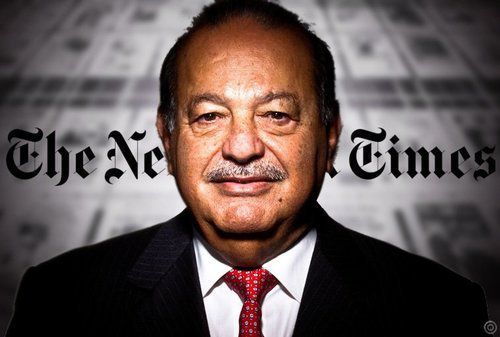 An excerpt from Chapter 13, of Ann Coulter’s latest book, Adios America. (Buy it at Amazon, or get a personally autographed copy from her website.) While we’ve added a few links, if you buy the book, you get all the footnotes as well.

CAN WE TRUST ANYTHING THE NEW YORK TIMES SAYS ABOUT IMMIGRATION?

In 2008, the world’s richest man, Carlos Slim Helu, (above) saved the Times from bankruptcy. When that guy saves your company, you dance to his tune. So it’s worth mentioning that Slim’s fortune depends on tens of millions of Mexicans living in the United States, preferably illegally.

That is, unless the Times is some bizarre exception to the normal pattern of corruption—which you can read about at this very minute in the Times. If a tobacco company owned Fox News, would we believe their reports on the dangers of smoking? (Guess what else Slim owns? A tobacco company!) The Times impugns David and Charles Koch for funneling “secret cash” into a “right-wing political zeppelin.” The Kochs’ funding of Americans for Prosperity is hardly “secret.” What most people think of as “secret cash” is more like Carlos Slim’s purchase of favorable editorial opinion in the Newspaper of Record.

It would be fun to have a “Sugar Daddy–Off” with the New York Times:

Whose Sugar Daddy Is More Loathsome? The Koch Brothers? The Olin Foundation? Monsanto? Halliburton? Every time, Carlos Slim would win by a landslide. Normally, Slim is the kind of businessman the Times—along with every other sentient human being—would find repugnant.

Frequently listed as the richest man in the world, Slim acquired his fortune through a corrupt inside deal giving him a monopoly on telecommunications services in Mexico. But in order to make money from his monopoly, Slim needs lots of Mexicans living in the United States, sending money to their relatives back in Oaxaca. Otherwise, Mexicans couldn’t pay him—and they wouldn’t have much need for phone service, either—other than to call in ransom demands.

Back in 2004—before the Times became Slim’s pimp—a Times article stated: “Clearly . . . the nation’s southern border is under siege.” But that was before Carlos Slim saved the Times from bankruptcy. Ten years later, with a border crisis even worse than in 2004, and Latin Americans pouring across the border, the Times indignantly demanded that Obama “go big” on immigration and give “millions of immigrants permission to stay.” What a difference one thieving Mexican billionaire makes!

True, it’s not unusual for the Times to root for the destruction of the United States. Maybe, in this particular instance, the Times agrees with every single thing Slim says. Perhaps there was a secret meeting with Slim: You may have saved us, Carlos Slim, but this newspaper will be in no way cognizant of your financial interest in continued illegal immigration. You’re just very lucky that we happen to agree with you. However, if you get into offshore drilling, we will take a VERY strong position against you.

On the other hand, there’s no question but that the Times has become exceptionally shrill on immigration since Slim saved the company from bankruptcy.

One of the ways Slim makes money off of illegal immigration in the United States is by overcharging Mexicans to call home, especially during World Cup soccer season. Slim takes a percentage of all cell phone calls into Mexico—and Telmex’s “interconnection rates” are astronomical. International roaming rates are 37 percent higher in Mexico than the average of all OECD countries.

But the main way illegal immigrants benefit Slim is through their remissions. Monopolistic pricing is of little value in a poor country. A monopoly on air in Burundi would not produce the world’s richest man. Luckily for Slim, Mexico is located right next to one of the wealthiest nations in the world. The OECD estimates that Slim’s suffocating telecommunications monopoly costs Mexican consumers $26 billion a year, with more than half of that coming from Slim gouging his customers. They would have $20 billion less to spend without 40 million Mexicans living in the United States.

According to the World Bank and the International Monetary Fund, Mexican immigrants or those of Mexican descent send at least $20 billion out of America back to their relatives in Mexico each year. No wonder immigrants are so reliant on welfare—they’re sending so much of it out of the country! Twenty billion dollars is significantly more—about a quarter more—than the amount of money the United States sends to Mexico in direct foreign aid. The $20 billion being sent to immigrants’ grandmothers in Chiapas is forever eliminated from the American economy—unavailable for investment in American companies, the purchase of American products, or hiring American workers. That’s a cost of immigration that Americans are never told about.

These billions of dollars being drained out of the U.S. economy every year would be bad enough if the money were coming exclusively from cheap-labor employers like Sheldon Adelson. But it’s worse than that. It comes from American taxpayers. Not only do taxpayers have to support Americans who lose their jobs to low-wage immigrant laborers, taxpayers support the immigrants, too. Seventy-five percent of immigrant families from Mexico are on government assistance.

Then they turn around and give the money to Carlos Slim. The majority of the money sent by immigrants to Mexico is used for “consumption”— i.e., to buy Carlos Slim’s telephone service, shop at Carlos Slim’s department stores, and eat in Carlos Slim’s restaurants. Slim’s businesses account for 40 percent of all publicly traded companies on Mexico’s main stock market index.

That’s why, in 2014, Slim was exhorting Mexican youth to cross illegally into the United States for jobs. The stated purpose of Obama’s open defiance of American immigration laws was to avoid punishing “children” who were brought to the United States by their parents. Slim didn’t care about that. (Then again, neither did Obama.) He just wanted more Mexicans working in America and sending dollars back to him. As the CEO of the “Carlos Slim Foundation” explained, “[O]ur goal is to reduce the access barriers for them to reach this potential . . . to build not just them but their families, so they’re able to contribute to the economy”—i.e., the Mexican economy owned by Carlos Slim.

THE TIMES CHANGES ITS TUNE

The Times has become noticeably hysterical about illegal immigration since Carlos Slim came on board. In 1997—the pre-Slim days—the Times had editorialized: “Fighting illegal immigration is a difficult and important job. But Congress should do it in a way that will deter illegal entry at the border.” Another editorial that year complained that the Immigration and Naturalization Service had “done a poor job of keeping out illegal aliens, deporting criminals [and] processing requests for asylum.” This wasn’t even Bush-bashing—Clinton was president!

Post-Slim, the Times tends more toward deranged hectoring in favor of illegal immigration. In the Times’ 2014 “Go Big” editorial—the one insisting that Obama grant permanent residence to illegal immigrants streaming across the border—the Times sniped: “Republicans will howl over Mr. Obama’s solo actions. Let them.”

The Times should never stop hearing about Carlos Slim. By all the rules of the Left, you’re not supposed to trust someone beholden to a rich man, especially one with a specific interest in public policy. If Slim had saved any company in the world other than the New York Times, his sleazy insider deals and business model based on mass illegal immigration to the United States would absolutely be a problem. But you forgot something—we’re the New York Times! We’re the good guys. You’re not factoring that in.

Her most recent book is Never Trust a Liberal Over Three-Especially a Republican.Her new book, ¡Adios America! The Left’s Plan To Turn Our Country Into A Third World Hell Hole,  was released on June 1, 2015.