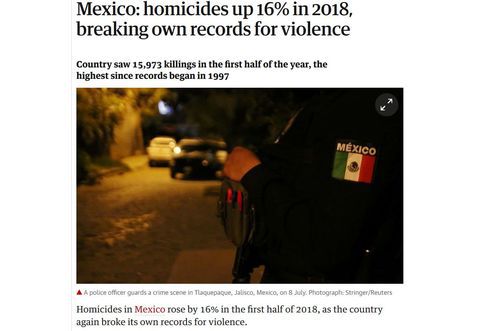 Mexico as the Boyle Heights of Countries

Mexico: homicides up 16% in 2018, breaking own records for violence

Country saw 15,973 killings in the first half of the year, the highest since records began in 1997

… Some areas, like the northern border state of Baja California, showed big jumps in murder rates, while others saw sharp drops.

Home to the border city of Tijuana, Baja California saw 1,463 homicides in the first half of the year, a 44% increase over the same period of 2017.

Authorities have attributed the spate of killings to battles between the Jalisco and Sinaloa drug cartels for control of trafficking routes in Baja California. The state is now Mexico’s second most violent, with a homicide rate for the first six months of the year equivalent to 71 murders per 100,000 inhabitants.

By comparison, Honduras and El Salvador, two of the deadliest countries in the world, have homicide rates of about 60 per 100,000.

I thought legalizing marijuana in California was supposed to reduce violence in Mexico?

The Baja California border is only a few hours drive from the 20 million people of Southern California, so it could be an immensely profitable tourist and second home area, especially because rich people along California’s coast connive like crazy to keep slightly less rich people from being able to afford beach-adjacent living.

It’s widely assumed in the US that the reason that tens of millions of Mexicans have moved to the United States rather than tens of millions of Americans moving to Mexico is because Mexico has such miserable real estate. But, in reality, Mexico has great real estate. Mexico is kind of the Boyle Heights of countries. Perhaps much of what happens (and doesn’t happen) in Mexico over the generations is like what has been happening in Boyle Heights in recent months: to keep the gentrifying gringos out, even at the cost of Mexico staying poor, stupid, and violent?
[Comment at Unz.com]