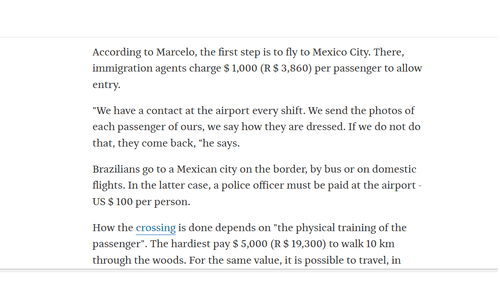 In the standard narrative of our mainstream media, illegal immigration is a moral drama—the wretched of the earth fleeing intolerable oppression, huddled masses yearning to breathe free, and so on.  From the other side, however, it looks much more like a huge and coldly commercial operation.

A correspondent in Brazil sent me this story from the August 12th edition of a São Paulo newspaper.  Note how well-greased the process is by bribes and insiders, the latter including apparently employees of the U.S. Postal Service.  Boldface is mine.

The zero-tolerance anti-immigration policy adopted by the President of the United States, Donald Trump, which was in force from May to June and separated children from parents, didn't prevent Brazilians from illegally crossing the American border.

The demand remains the same, including families with small children, says a coyote that for more than 20 years has smuggled people from Governador Valadares [SE Brazil] into the U.S.

Marcelo (fictional name), 50 years old, agreed to describe the scheme in detail to Folha de São Paulo, provided his real identity never be disclosed. He sent audio and video records of people who managed to sneak into the U.S. after hiring his services.

According to data released on Wednesday (August 8th) by the U.S. Border Patrol, the number of families detained at the Mexican border had a minor fall of 2.8 percent from June to July (9,434 to 9,258).

Marcelo says he charges US$20K from each immigrant "for those who are not a headache."

"If I think the candidate is not fit or is unable to grasp my commands and will be troublesome, then I charge US$22K."

The money is kept with some relative in Brazil and the final settlement is made upon the arrival of the immigrant in the U.S.

The crossing—through a river, a forest, a tunnel or even through the very wall that already exists in part of the border and which Donald Trump wants to extend—is only possible by paying bribes to border officers in many steps, he affirms.

On average the coyote smuggles 20 people each month, but he estimates that 80 other people from Governador Valadares also run human trafficking operations, and some manage to send 50 immigrants per month.

"I'm a small fish surrounded by sharks. I don't work too much because my family don't like it. I hide my activities from my family more than I do from the ICE," he says, having been arrested three times in Brazil and eight times deported from the US for smuggling people.

While the separation was enforced by Trump—parents were sent to federal prisons and the children to shelters—three mothers smuggled by Marcelo were imprisoned in places different from their children's.

One of them was kept far from her five years old daughter. "But everybody is together now, working there."

According to him, even in that period some families made the crossing without any hassle. "An insider would tell us when the shelter got full. Then the immigrants took advantage and crossed."

Experts warn that such experiences are traumatic for the children. Currently the hard-line policy is not in force.

After the zero-tolerance policy was halted, Marcelo says, the families with children that he smuggles to the U.S. resort to a well-known method: they surrender themselves to the border patrol and ask for asylum. In this option, the charge is reduced by half [US$10K]. "Relatives with children have better odds to be given entrance. And the journey is easier," he claims.

He concedes that in some cases the unaccompanied minors pose as sons and daughters of another adult. "If I have an unaccompanied minor and a colleague (another coyote) has a childless adult, he pays me US$2K for the child to go as his/her son."

According to Marcelo, the first step is to take a plane to Mexico City. There immigration officers charge US$1K for each passenger to be admitted into Mexico.

"We have an insider in the airport in all shifts. We send pictures of each one of our passengers, we inform how they are dressed. If we don't do that, they would all be sent back."

The Brazilians go to a Mexican border city, by bus or in domestic flights. In this case, an airport officer will be bribed US$100 per passenger.

The way the crossing is made depends on how fit the passenger is. The fittest pay US$5K and walk 10km through a forest. The same amount is charged for crossing in an inflatable boat.

There is also the option of jumping from the fence in the border. We have a person who warns us when the guards shift. Then they climb with a rope and reach the American side. Then they run and vanish. It's possible only for those able to run.

Obese, elderly and disabled people, and pregnant women can resort to the "superfancy" alternative, as Marcelo classifies it: a path through a tunnel that takes 10 minutes to be completed and leads to a farm inside the US. This part of trip only is charged US$10K by the Mexicans that controls it.

Once in the US, it’s necessary to clear the immigration controls in the roads. Marcelo says the immigrants are put in cars or trucks with false bottoms—many are caught in this step, as shown in images distributed by ICE.

Even a U.S. Postal Service vehicle is used: "The person goes underneath the pouches, very quietly. Once the toll booth is crossed, you are free."

According to him, about ten percent of the Brazilians that hire his services are caught by the police. For these cases he's got a network of lawyers who try to release the person through bail while the judicial process runs its course. "Even if the person is deported in the end, there's enough time till the final decision for he or she to amass a good amount of money."

Marcelo says he sneaked into the U.S. 35 times without being caught and lived there for 12 years. In the many times he was arrested, he thought about giving up the trade of coyote, but ended up returning to his illegal activities.

"An Exchange rate of R$4 per US$ is too tempting. I worked for a building company, very hard, and earned just the minimum wage. I couldn't stand even four months," he says. He buys real estate with the income from the trafficking. "I don't like to show off. I have my pretty farm, my pretty pool, but I don't own fancy cars, for example," he says.

For him, the same temptation leads many citizens from Governador Valadares region to migrate illegally.

"Here [in Brazil] there's no job, no enterprises, no factory, no options. Have you ever thought about working for a minimum wage [about US$340 a month in purchasing power parity] when you can go there in the US and earn in dollars? This is the only way the person can give a better life to his family. He takes out a mortgage, sells the truck, he does whatever it takes to pay for the trip. Yes, I am receiving my portion but I am also helping all these people to make a living."

The son of a train driver, Marcelo went to the US for the first time when he was 17 [i.e. in 1985—J.D.] "Before long I was able to buy stuff. This incentivized my neighbours to come. Many people asked me to help them to sneak into the US. I started out this way."

He affirms that laws and hard-line measures as proposed by Trump won't stop the migrants. "This scheme generates lots of money. I won't ever stop."  [Trump and US$20 thousand costs do not slow down Brazilian migrants, says coyote by Flávia Mantovani; Folha de São Paulo, August 12th 2018.]