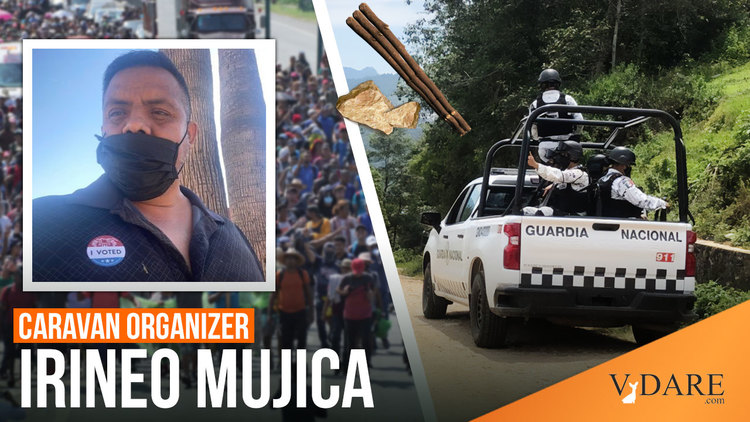 The latest illegal-alien caravan, 4,000 strong, is inching north to the border with Mexico with plans to stop in Mexico City, receive visas, and then proceed to Biden's America.

Others, of course, are traveling on their own, but either way, the marching masses of Central America are causing all sorts of problems for Mexico, which is not handling them consistently.

What a contrast with the days of Donald Trump, in which deals with Mexico and Central American countries had greatly improved the situation.

The Guardsmen are in big trouble. President Andres Manuel Lopez Obrador (AMLO) condemned them, and said they shouldn’t have fired:

[T]hey could have stopped them up ahead, blocking their route, without shooting.

You make it sound so easy, Presidente.

Irineo Mujica, the dual-citizen caravan organizer who’s doing his best to make Camp of the Saints a reality for the Historic American Nation, has accused Mexican authorities of xenophobia:

[Mexican] federal authorities, through the National Migration Institute and the National Guard, have undertaken a hunt against the members of the migrant caravan, advancing a campaign of xenophobia against men, women and children, according to activist Irineo Mujica, whom authorities identify as one of the leaders of the movement.

[R]eally they are desperate and out of control and determined that blood is shed to stop the caravan. After they have unleashed a hell on us, after fomenting xenophobia, after that they really consider us as if we were the worst criminals.

They don’t receive us with hugs and kisses, but with bullets and sticks. To the National Guard we are the worst of criminals.

Well, Mexico’s National Guard is right about one thing. Some of Mujica’s marchers are the worst of criminals.

Not a week after the Guard shooting on November 4, a mob of caravan stragglers attacked the National Guard in Chiapas with sticks and stones, leaving five injured:

The encounter took place at 8 a.m., when personnel of INM and the National Guard attempted to stop migrant stragglers from the caravan. Mexican authorities sought to surround the migrant group and board them on INM trucks. The migrants hurled stones, sticks and other projectiles toward the National Guard. The security elements had to retreat, but were pursued by the migrants.

N.B.— “migrants” chased the soldiers even after they retreated in their vehicles.

And Mujica wonders why these “migrants” aren’t greeted with “hugs and kisses.”

Why did the Guardsmen permit the peace-loving “migrants” to humiliate them? Apparently they were ordered not to fight back. And so the emboldened “migrants” made fools of them.

Mexican security forces had better not let this happen again.

Día de los Muertos (Day of the Dead) is the Mexican version of the Catholic All Souls’ Day, but in recent years it’s been a pretext to exploit the deaths of border-jumping illegals. This year was no exception:

Activists and migrants installed at the border wall an Altar Of The Dead in memory of those who died in their attempt to cross to the United States. The curb was adorned with cempasuchil flowers [Mexican marigolds], sugar skulls, wooden crosses and two small mounds representing a grave in memory of Mexicans and foreigners [who died].

It’s a humanitarian disaster—and yet another reason we must seal the border for good.

From January to October, the federal government received 108,195 petitions from migrants seeking refugee status, a record number which surpasses any similar time period or complete year, the Mexican Commission of Aid to Refugees reported on Tuesday.

Why’s that significant? The figure topped 100,000 for the first time.

Mexico has 50 consulates on U.S. soil, and now it wants to add two more. One of them is set for Oklahoma City, [Oklahoma City to house new Mexican consulate, by Hogan Gore, Oklahoman, October 26, 2021].

Worse still, GOP Governor Kevin Stitt is all for it.

The consulate is needed, Mexico says, because traveling to a consulate in one of the five states bordering Oklahoma is a hardship.

These people moved to Oklahoma from Mexico. They can certainly travel to a neighboring state.

Of course, the hardship claim is a pretext to set up yet another consulate from which the Mexican government can defend illegal aliens, cultivate relationships with Mexican-Americans and further colonize the United States.

As for Governor Stitt, Mexico’s Foreign Ministry just disclosed what he and Mexican officials discussed on a trip south of the border:

Today, foreign ministry officials met with the governor of the state of Oklahoma, John Kevin Stitt, and with members of his team, on the occasion of his visit to our country. The meeting in the foreign ministry permitted strengthening of the ties of bilateral cooperation between our country and this state of the U.S. … Among the topics discussed in the meeting was the opening of a new consulate in Oklahoma City, recently announced by Foreign Minister Marcelo Ebrard, to provide attention to the Mexican community in that constituency. With more than 11% of its population composed of Mexicans, Oklahoma is an important ally for Mexico in the United States, given the importance of its energy industry, which produces 40% of its capacity from sources of renewable energy. It’s also important for its geographical location, which is ideal for distribution to the entire country.

Speaking of Oklahoma’s “geographical location, which is ideal for distribution to the entire country,” it’s worth observing that location is perfect for distributing illegal drugs.

That doesn’t bother Stitt. Indeed, opening a new station for subversion is a “priority,” as one news report put it [Gov. Stitt returns to Oklahoma following trip to Mexico, says more discussions had on plans for Mexican consulate in Oklahoma City, by Hicham Raache, KFOR, November 5, 20221].

I made sure Mexico knew this has our full support and that we would help find the perfect location and roll out the red carpet to help any way we can.