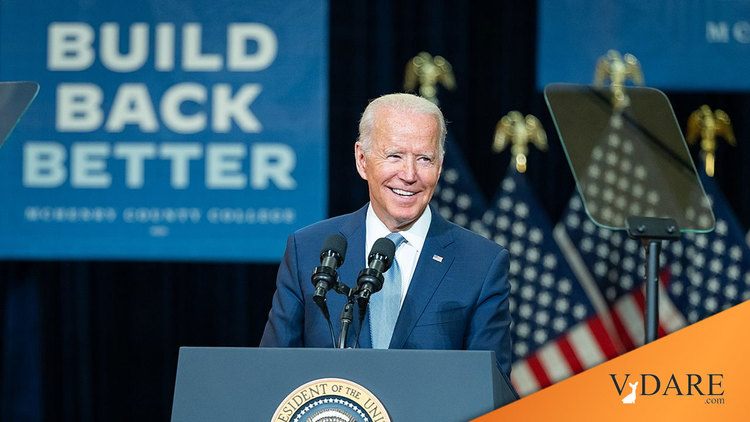 The White House’s official press release announcing the Build Back Better Act (BBB) pitches it as a “PLAN TO REBUILD THE MIDDLE CLASS.” It rhapsodizes about “working families” squeezed by the economy, and reminds voters that “Biden promised to rebuild the backbone of the country—the middle class.”

A cartoon illustrates the sort of person who would benefit from Biden’s Build Back Better programs: “Linda,” a white woman, who works at a manufacturing plant but struggles to raise her son, “Leo.” 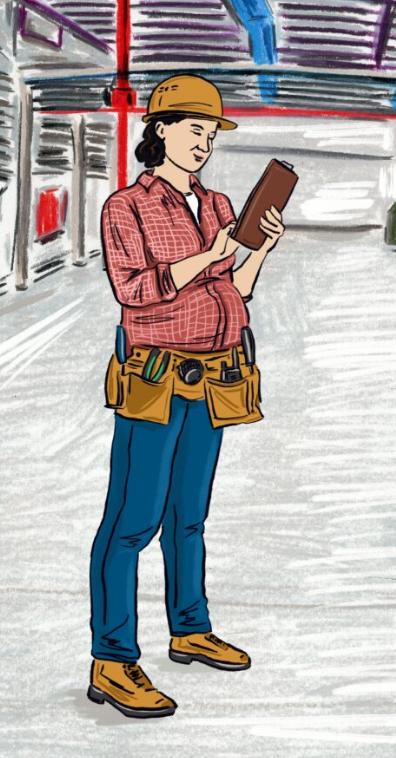 White House’s official press release did not mention is that almost all of the $2 trillion doled out under BBB is expressly designated for Black, Latino, Native American, Asian American, Pacific Islander and non-English speaking individuals. White Americans will get nothing and like it.

Over and over again, the bill is written expressly NOT to help the hardworking Linda, apparently because she is white. Here are just a few examples:

The very first item in Title II of the bill, titled “ELEMENTARY AND SECONDARY EDUCATION,” is a program to distribute more than $100 million in grants to address “low diversity within the teacher and school leader workforce.” To be eligible for a grant, the recipient must have a plan “to increase the diversity of qualified individuals entering into the teacher, principal, or other school leader workforce.”

But wait—here’s a plot twist! This part also includes something for rural America! (So Democrats have heard of Appalachia.) Twenty-one percent of the country is rural. Twenty-four percent is non-white. Guess how the money is divvied up?

One billion dollars for minorities and $200 million for “rural business centers.”

Even provisions that don’t explicitly exclude whites turn out, on closer examination, to exclude whites. I’ve never seen so many synonyms for “non-white,” such as “persistent poverty communities,” “historically economically distressed,” “historical injustice” and “underserved communities.”

“This section also defines an ‘underserved community’ as a group of people who have been systematically denied the full opportunity to participate in aspects of economic, social, and civic life. Underserved communities include Black, Latino, Indigenous and Native American persons, Asian American and Pacific Islanders, other persons of color, [etc.].”

How about changes to our environmental laws? White people love the environment! Sorry, out of luck, again, white boy.

BBB allocates almost $7 billion for “national service programs to carry out projects related to climate resilience and mitigation.” Unfortunately, however, all those billions have to go to “entities that serve and have representation from low-income communities …; utilize culturally competent and multilingual strategies; … implemented by diverse participants from communities being served.”

One billion dollars of the “Climate Resilience and Mitigation” loot is specifically directed to “individuals who were formally incarcerated.” [Sic.] Sure, climate change is important—but not as important as giving money to convicted felons!

What the hell happened to Linda?

Linda is wearing a hardhat, so her job has probably been outsourced. Maybe she’ll be helped by BBB’s humongous expansion of the Trade Adjustment Assistance program (TAA). That’s the law passed in the 1960s to compensate American workers whose jobs have been shipped abroad by globalist swine who couldn’t care less about their fellow Americans and don’t mind that every single thing we need, including masks and medicine, is made in China.

In fact, the BBB hijacks the whole idea of compensating globalism’s losers and turns the TAA into just another massive welfare scheme. Both the eligibility requirements and payment amounts are expanded beyond all reason, entitling “workers” to years and years of payouts, with no minimum employment period required, and no stipulation that trade has anything to do with the loss of their jobs.

Thus, for example, a program that is—again—meant to remunerate workers whose jobs were shipped abroad will now offer assistance to public sector employees. How does a government employee lose a job at all—much less to trade? (I only wish we had Chinese people running our grade schools.)

Naturally, states will be required to work with “training providers” that have a proven track record serving “Black, Latino, Indigenous and Native American persons, Asian American and Pacific Islanders, other persons of color, members of other minority communities” and so on.

Republicans seem to think that if they just talk about how much Biden’s BBB plan costs, their job is done. They ought to read the bill. It might prompt them to finally say something about the Democrats’ clear animus against white Americans.