Whatever one thinks of Chavez, he was an American opposed to illegal immigration from Mexico—as a Hispanic labor activist he fought hard against what he described as “wetback labor” [Cesar Chavez, Minuteman, by Steve Sailer, American Conservative, February 27, 2006].

Of course, the Mexican Foreign Ministry doesn’t talk about that; it just shamelessly appropriates Chavez for its own purposes, much as an African country might appropriate Martin Luther King, Jr.

Foreign Minister Marcelo Ebrard kicked off the institute with a big Zoom call that included the Mexican ambassador to the U.S., Esteban Moctezuma, and other dignitaries, including Pablo Chavez, son of Cesar:

Today [Ebrard] participated in the inauguration of the Digital Cesar Chavez Institute for the Spanish Language in North America. … The DCCI is an initiative developed by the Executive Directorate of Cultural Diplomacy of the Ministry of Foreign Affairs that promotes the defense of the Spanish language and its culture among the Mexican and Latino-origin communities in the United States and Canada, who face the continuous manifestations of linguistic supremacism and discrimination.

Ebrard claimed the organization was brought about because of the 2019 El Paso shooting, and linguistic supremacist groups threaten not just Mexican-Americans, but even Spanish-speaking visitors:

“Not necessarily in the United States”? Is Ebrard saying that these so-called “supremacists” might decide to “terminate” all Spanish-speakers outside the U.S.? 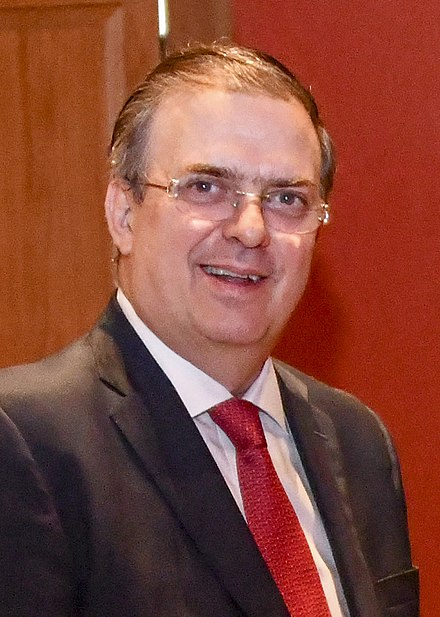 Whatever he means, it’s inflammatory. How does such talk help international and intercultural relations?

Ironically, Ebrard himself is extremely white (like most of the Mexican elite, it’s a funny thing).

He’s the “descendant of the French emigrant wave from Barcelonnette in 1915,” according to Wikipedia.

Historically, the white Latin American elite is the most successful “supremacist” ruling class in the world.

While they lambast “white supremacism,” they enjoy their own “white privilege”, without a shred of obvious self-awareness!

The Biden Rush, following his impulsive dismantling of Trump’s border protections, is a disaster for the U.S.—Border agents apprehended more than 170,000 illegals in March, a mind-numbing total that brought the figure for fiscal 2021 so far to some 569,000.

But it’s also a disaster for Mexico, because it knows Central Americans and others headed for the border might actually stay. Six items in nine days from Milenio, a major national newspaper in Mexico,  suggest Mexico is struggling hard—and that the flow shows no signs of stopping:

After an anonymous call, a total of 53 undocumented persons were rescued after being abandoned in … a three-story dwelling. …

The call that alerted the authorities reported that since [March 23] they observed in the interior of the place that there were persons of foreign appearance [emphasis added], therefore a group of police went to investigate. Upon arrival, the police found 24 children, 15 women and 14 men, from Honduras and Guatemala, who were planning to arrive to the United States with the help of some persons who were guiding them through various cities.

The mini-bus depicted in the story clearly shows it was not designed for 40 passengers.

The detainees, “18 unaccompanied minors and 22 adults from Honduras and Nicaragua,” will “be repatriated to their countries of origin.”

In other words, Mexican authorities will deport them.

[On April 2], municipal police, with support of the National Guard, rescued 42 migrants of Nicaragua, among them minors, from a motel in Minatitlan … after a report indicating that there were entire families of foreign origin in the motel [emphasis added].

Elements of the National Guard arrived at the location, and, with the support of municipal police, implemented an operation that resulted in the rescue of the Nicaraguans.

The group included “five girls from the ages of 1 year, 9 months to 6 years of age, five boys of 2 to 6 years, nine women from 19 to 37, and two men from 27 to 28. They were taken to the Instituto Nacional de Migración office.” A young man who attempted to escape, suspected to be a trafficker, landed in jail [Rescatan a 21 migrantes centroamericanos en Apodaca (“Twenty-one Central American Migrants Rescued in Apodaca”), by Pedro Delgado, April 2, 2021].

“[Authorities apprehended] 61 Central American migrants, of whom 33 were minors, who were traveling in crowded conditions and with signs of dehydration due to the extreme heat of the region” [Rescatan a 33 menores de edad y 28 adultos migrantes hacinados en Nuevo León (“Rescued: 33 Minors and 28 Adult Migrants From Crowded Conditions in Nuevo Leon”), by Veronica Diaz, April 3, 2021].

The breakdown: 57 Hondurans, 3 Guatemalans and a Salvadoran unaccompanied minor.

National Guardsmen found them in the back of a truck covered with a plastic tarp. The National Institute of Migration will deport them.

The “undocumented persons” from Honduras and El Salvador were being deported, or as the Mexicans might say, “repatriated.”

Whatever you call it, one fact remains: If the illegals had stayed where they belong—home—they wouldn’t have been in a bus crash.

And it’s Joe Biden’s fault for opening the U.S. border.