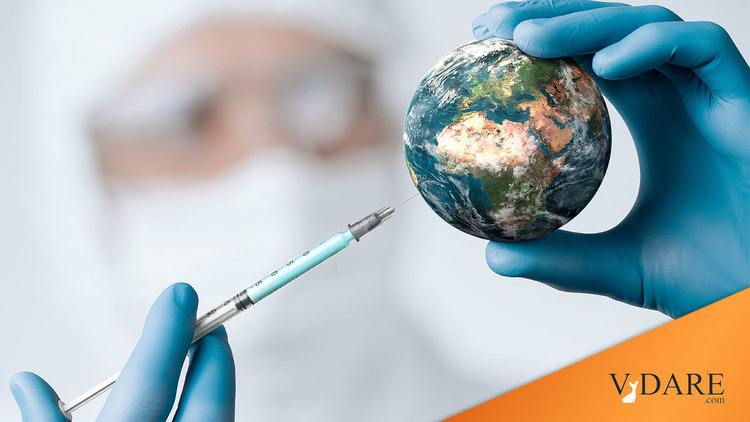 Earlier, by Steve Sailer: The Left’s Vaccine Problem: Prioritizing "Not Being Racist" Over Saving Lives

When the Pfizer and Moderna vaccines first proved their efficacy, preventing nearly 95% of coronavirus infections in those who got the shots in test trials, a vexing issue immediately arose.

Who should get priority in receiving these life-saving shots?

Generally speaking, the answer, while differing slightly from state to state, was that those most vulnerable to the virus, and those most vital to battling it, should be inoculated first.

The most vital were doctors, nurses and emergency medical personnel in hospitals receiving infected patients. The most vulnerable were the elderly in nursing homes with comorbidities and compromised immune systems who would be the least likely to survive an infection.

As the age for early inoculations dropped from 75 to 65, and then 50, and communities began to be vaccinated in greater numbers, a new issue arose: race. Blacks, peoples of color and the poor were not receiving inoculations at the same rate as the white and wealthy.

Efforts were made to rectify any such inequity.

However, almost no voice arose to say the world's poor should be inoculated at the same time and at the same rate as Americans—with vaccines Americans had invented and produced.

That role has now been filled. In The Washington Post of April 6, Darren Walker [Tweet him] President of the Ford Foundation, writes: "An equitable vaccine rollout must prioritize the most vulnerable around the world."

"Vast disparities are emerging in vaccine access—both within countries and between them," says Walker, "especially for Afro-descendant and Indigenous communities.

"Within countries, the gaps are stark. In the United States... White people remained nearly two times more likely to be vaccinated than their neighbors of color at the end of March. In Brazil, Indigenous populations are 10 times more likely to die of covid-19 than the general population... And in India, many members of poor Muslim and Dalit communities are denied access to the limited vaccine supply that is available...

"Rich nations are hoarding the vaccines. Whether it’s the European Union blockading international vaccine exports entirely, or the United States stockpiling 30 million AstraZeneca doses, a wave of vaccine nationalism is depriving the world of much-needed supply."

What must we Americans do to end the inequity?

Embrace a new policy of vaccine globalism and egalitarianism.

"The United States could... vaccinate the world—mobilizing the resources of the U.S. military and other agencies to manufacture, ship and distribute doses around the world. ... To paraphrase the Rev. Martin Luther King, Jr., vaccine inequality anywhere is a threat to global health everywhere."

Walker reflects what might be called Ford Foundation values. But are these American values?

Is it wrong for America to put Americans first?

"Vaccine nationalism" seems but a synonym for vaccine patriotism.

If and when we have a surplus sufficiently large to send our vaccines abroad, would it be wrong to prioritize nations that are tried and true friends and allies like Canada and Britain?

When it comes to moral obligation, especially when it involves a matter so serious as human life, ought not one's own family and friends, community and country come first?

While all peoples may be equal in their God-given rights to liberty and life, the duty of the U.S. government is to protect and defend first and foremost the rights, and the health and safety of American citizens.

King may have written, "Injustice anywhere is a threat to justice everywhere." But America is not responsible for "justice everywhere"—a utopian concept—but to establish justice to the degree it can in the USA.

Nor is inequality always a manifestation of injustice.

Easter Sunday is just behind us, the day Christians celebrate the Resurrection of Jesus Christ who taught, "Greater love than this hath no man that he lay down his life for his friend."

Such individuals are saints, and that is indeed sanctity.

But natural law teaches that, when it comes to love and loyalty, one puts one's own family and country first.

"Vaccine inequality," says Walker, is "a crisis to be solved... We must move away from vaccine nationalism to vaccine equity.

"An equitable vaccine rollout must prioritize and protect the most vulnerable in our societies—from the Dalit community in India, to Indigenous populations in Brazil, to essential farm workers and grocery store clerks throughout the United States."

Sorry, but India's Dalit community is Narendra Modi's responsibility. The indigenous population of Brazil is Jair Bolsonaro's responsibility. And the "farm workers and grocery store clerks in the USA" are ours.