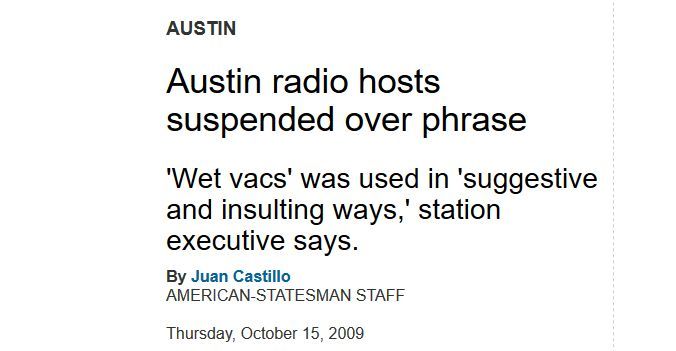 For those who don't know it, a "wet vac" is a vacuum cleaner that cleans up wet things as well as dry. If you wanted to buy one, you would, of course, go to Home Depot, shouldering your way through the crowds of illegal aliens who traditionally collect outside Home Depot, in order to steal American jobs. Most of these people stole softly into America, many of them by fording the Rio Grande.  Since the Rio Grande is largely made of water, the people who do this have traditionally been known as "wetbacks." Two morning show hosts in Austin Texas have been suspended for making a joke about this.

"The co-hosts of the 'Jason and Deb' morning show on Austin radio station 101.5 FM have been suspended for one week without pay after repeatedly using the phrase 'wet vacs' in 'suggestive and insulting ways' Tuesday, an executive with the station's parent company said.

"In the wake of the comments, all on-air employees of parent company Emmis Austin Radio and its six local stations will be required to take cultural sensitivity and diversity training, said Scott Gillmore, Emmis vice president and market manager.

"Some listeners said they mistook the words on the program on the alternative rock station for the slur 'wetbacks.'" [More]

"Tuesday's incident marks the second time in four months that on-air employees of Emmis have been disciplined for making comments that some listeners considered racist or culturally insensitive.

"Gillmore said that hosts Jason Alvarez and Deb O'Keefe 'did not actually use any slur, but they did make foolish and ugly comments for which we sincerely apologize.' He said the company got a few complaints about the broadcast Tuesday, 'and we immediately took the show off the air.'

The FM station 101X is owned by Emmis Communications, which is property of Jeffrey Smullyan, who is very rich and well connected. (He gave money to John Edwards, Obama and…Rudy Giuliani.)

"A listener, Celia Hagert of Austin, said she and her husband, Eduardo, thought they heard O'Keefe ask several times, 'Why don't they just go hire some wetbacks at Home Depot?'

"'We were just staring at each other in disbelief, Celia Hagert said. "

Hagert [email her] turns out to be a policy wonk (or wonkette) at the Austin-based Center for Public Policy Priorities liberal think-tank. Her husband Eduardo (Hagert) [email him] is chief of staff for Texas state Senator Eliot Shapleigh (Democrat).   Shapleigh represents District 29 in the Texas State Senate. And district 29 is a large part of El Paso County—which is 78.23 per cent Hispanic, and which is actually located on the Rio Grande River.

I think the Austin American-Statesman's Juan Castillo [email him] should have mentioned that in his article.

"Gillmore said O'Keefe used the phrase 'wet vacs' to refer to wet-dry vacuums. He said O'Keefe is from England, where the word 'hire' can mean 'rent.' The comments are not included on the station's Web site as part of recordings from Tuesday.

"The incident follows a controversy this summer involving another Emmis station, KLBJ-AM, in which former talk-show host Don Pryor repeatedly used the ethnic slur to describe illegal immigrants on the 'The Todd and Don' show. The show was later canceled under an agreement reached between Emmis and Hispanic community leaders and local members of the U.S. Hispanic Contractors Association."

Yes, this is the second time in four months that Emmis Austin, (General Manager Bruce Walden [email him] VP/Marketing Manager Scott Gillmore [email him]) has surrendered over this ethnic speech police. In July, the same Hispanic reporter wrote:

"The agreement follows last week's repeated use by Pryor of an ethnic slur to describe illegal immigrants on the morning talk show, triggering complaints from listeners and Hispanic leaders.

" 'We certainly acknowledge and apologize for the airing of language and remarks that were insulting and highly offensive to many, many people,' Scott Gillmore, Emmis Austin Radio vice president and market manager, said Monday at a press conference at Saltillo Plaza. He was joined by Frank Fuentes, the contractors' national chairman, and about 30 Hispanic leaders, including former Texas Sen. Gonzalo Barrientos and former Austin Mayor Gus Garcia.' "[SLUR SCANDAL: KLBJ-AM exec: 'I think they made a very bad error in judgment' |Station cancels 'The Todd and Don Show'; hosts will remain on staff, By Juan Castillo, Austin American-Statesman, July 20, 2009]

Frank Fuentes, who is chairman of U.S. Hispanic Contractors Association de Austin, is "widely believed to wield considerable influence over who gets minority-owned business enterprise contracts with the city of Austin," according to one city hall reporter in Austin.

And contractors, Hispanic or not, are among the most notorious employers of (wait for it!) wetback labor.

It may be that sensitive Mexican-Americans don't want to hear the word wetback. It's currently listed in Wikipedia under Wetback (slur). But why should anyone care?

Calling a native-born Mexican-American a wetback may be a slur. But calling an illegal immigrant a wetback isn't a slur. It's practically a euphemism compared say "invader" or "criminal".  At VDARE.COM, we try not to utter ethnic slurs because we're polite, and because people can't help how they're made—it's not an Indian's fault that his great-great-grandfather was a savage, any more than it's a white man's fault that his great-great-grandfather owned slaves.

But illegal immigration is a matter of choice—it's a crime, and someone who's committing a crime isn't entitled to decide what he wants to be called. It's like hearing a man who cheats at cards protesting that he'd rather be called an "advantage player" than a "cardshark" or "crossroader".

The hell with him—he's a cheat. Throw him out of the game and don't worry about what to call him.

As I said in a previous column,

"[G]iven that First Amendment jurisprudence gives journalists this (somewhat counterintuitive) 'right to lie,' why is that media moguls are so quick to crumble in these cases when somebody tells the truth?"The Unbearable Wetness Of The Rio Grande, November 26, 2004

The repeated crushing of anyone who uses this term (or even something that sounds like this term, as Jason and Deb did) is part of the campaign to convince people that the fight against illegal immigration is anti-"civil rights"—in other words, part of the evil racism of the 1950s that everyone hears about in school.

And I can't help thinking that most of the people who object to the use the term are people who actually, secretly, sympathize with the wetbacks.

As Peter Brimelow once wrote about Raoul Lowery Contreras