Originally published in the Daily Caller, March 14, 2017, and resulted in an immediate attack by the Cultural Marxists at Media Matter For America: Daily Caller Publishes Pro-Steve King Piece By White Nationalist Leader, by Eric Hananoki, March 15, 2017 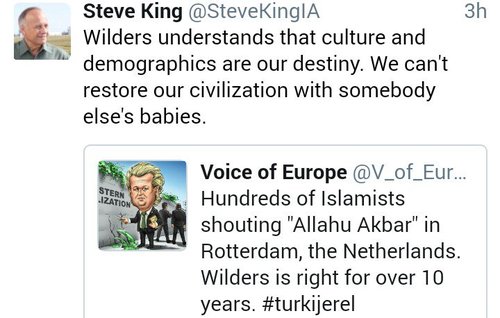 Rep. Steve King (R-IA) is in trouble with the Political Correctness Commissars and the usual cowardly Republicans etc.—not for the first (or even the tenth) time—because of his Sunday tweet: “[Dutch anti-immigration politician Geert] Wilders understands that culture and demographics are our destiny. We can’t restore our civilization with somebody else’s babies.” Of course what King said is entirely defensible. But the paroxysms he has provoked says gigabytes about our post-American political class.

In his harrumphing interrogation of King on CNN Monday morning, Chris Cuomo said: “It seemed like… you were trying to say someone else’s babies means you’re either white or you’re not right. As you know, that is anathema to what America is all about.”

“Anathema to what America is all about”? This is nonsense as a matter of historical fact. The Founding Fathers were all white (and overwhelmingly Protestant). Their preamble to the U.S. Constitution said specifically that its purpose was “to form a more perfect union… [for] ourselves and our posterity”—by which they literally meant their physical descendants. And the 1790 Naturalization Act limited U.S. citizenship to free white persons (albeit “of good character”!)

In other words, the U.S. was to be a nation-state, the political expression of a particular (white, British) people, as in Europe.

Maybe the U.S. should have been a “Proposition Nation,” united by allegiance to an abstract creed, as many intellectuals have claimed, especially since World War II. But it wasn’t.

And, to a significant extent, it still isn’t. White Protestants cast some 40% of the vote in the 2016 Presidential election—whites overall cast about 70%—and their influence is still profound: both major party Presidential candidates were white and, at least nominally, Protestant. Arguably, White Protestant values (often Progressive) still underpin American order.

Nations are ethno-cultural entities—neither completely ethnic nor completely the other. Rep. King (who is Catholic) could quite legitimately have argued that, yes, I certainly meant there’s a white ethnic core to America and there’s a limit to how far that can be displaced.

But, it’s vital to note, King did not actually do that in his post-tweet CNN interview with Chris Cuomo. Instead, he made a purely cultural argument:

It’s the culture, not the blood. If you can go anywhere in the world and adopt these babies and put them into households that were already assimilated in America, those babies will grow up as American as any other baby with as much patriotism and love of country as any other baby. It’s not about race. It’s never been about race. In fact the struggles across this planet, we describe them as race, they’re not race. They’re culture based. It’s a clash of culture, not the race. Sometimes that race is used as an identifier.

So King in fact apparently does think “that our civilization” can be restored “with somebody else’s babies”—if they’re assimilated (which, of course, is notoriously hard to do).

My interpretation here is endorsed by Ben Shapiro, always quick to denounce deviationism to his right. He commented on King’s statement:

“If you go down the road a few generations or maybe centuries with the intermarriage, I’d like to see an America that’s just so homogenous that we look a lot the same.”

The media immediately clipped the second half of that sentence, making it sound like King wanted to stop interracial marriage and instead maintain white purity. 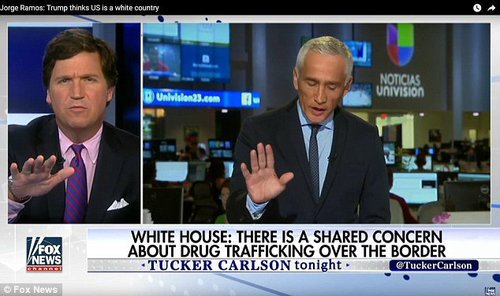 But the underlying issue: so what? Why this pathological (and in this case misplaced) hostility to the idea that whites have rights in the U.S.?

This is our country, it is yours, it is mine and it is ours. The interesting thing is with the Trump administration and many people who support Donald Trump they think it is their country, that it is a white country and they are absolutely wrong. This is not a white country, this is not their country, it is ours, and that is precisely what I’m saying… Look in 2044, the white population will become a minority, it will be a minority-majority country, that is precisely what I’m saying. Latinos, Asians, African-Americans, whites, it is our country, Tucker.

Let’s say this would definitely have been… news to the Founding Fathers. But what did they know?