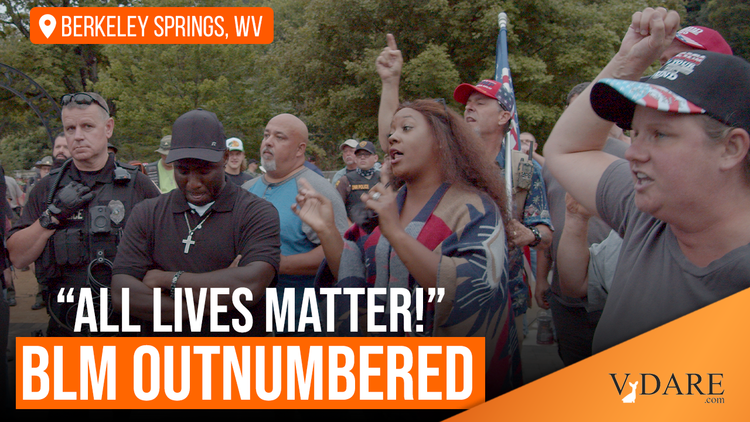 More thoughts on the Aug. 21 Patriot rout of Black Lives Matter in Berkeley Springs WV: It really felt more like a Trump rally as opposed to the Cultural Marxist white-guilt ceremony the event-planners had in mind.

Unprecedented traffic into the little town made travelling to cover the event a near nightmare. Motorcycles and pick-up trucks, ecumenically equipped with Confederate Battle Flags, Union flags and Trump flags, filled the downtown street. From the parking lot of a nearby bank we were able to hear the National Anthem roaring from a loudspeaker, followed by chants of “All Lives Matter!”—not a typical BLM war cry.  A semi-truck was parked beside the courthouse with nearly a dozen US flags. We thought surely there was a mix-up and that this couldn’t possibly be the right address.

But it was. Counter-protesters outnumbered the Black Lives Matter demonstrators 10-1. In the center of Berkeley Springs park, planned speakers for the event couldn’t raise the volume on their PA system high enough to pierce the crowd of Historic Americans heckling their baseless claims of “systemic racism” and “white privilege.”

BLM was largely a collection of white teenagers, yuppie boomers, and one literal clown. (See the video). Interestingly enough, we were only able to count eight black attendees—and half of them came to counter-protest BLM.

We filmed as two white BLM supporters were surrounded on the sidewalk. “In my 12 years in the army, I want to tell you who oppressed me.” a local black counter-protester shouted at the demonstrators. “Black people oppressed me. The white man helped me advance!” He went on: “Trump has made life better for everyone. Blacks, whites, everybody!”

It’s important to note that, unlike the Charlottesville Unite The Right rally in 2017, where Leftist counter-protestors violently attacked speakers and attendees with whom they were in disagreement, the counter-protesters in Berkeley Springs were entirely restrained, allowing the small event to continue as permitted, merely debating their point of view from the crowd.

What did we learn? BLM tactics rely on strength in numbers. In Berkeley Springs, local patriots refused to kneel.