Attending A Trump Support Rally—It Was Fun, There Were Demonstrators And They Had Interesting Signs 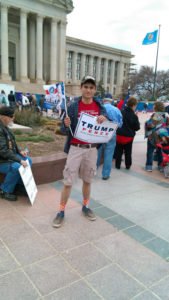 My son David and I attended one of the Trump support rallies at our state capitol on March 4th, and I have to say, it was fun. Even the protesters were well-behaved, and their protest signs were comical.

Although he’s not yet old enough to vote, my son David is an avid Trump supporter and was even able to attend the inauguration, on a 4-H Club trip. (See a previous blog entry Trump is Now the President.)

David wore and brought Trump paraphernalia, including wearing his Donald Trump socks, which were noticed by some. 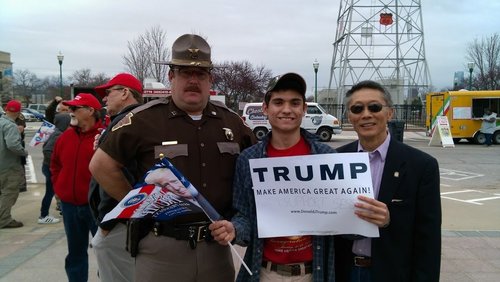 It was a fun rally, just being with several hundred Trump supporters and talking to some of the people was worthwhile.  Even the state police on hand for security seemed relaxed.

There was a small handful of protesters at the edge of the crowd. They weren’t violent, and there was some dialogue between the protesters and the Trumpsters.

The protester’s signs were curious, and sometimes comical (intentionally or unintentionally?).  Well, nowadays it’s difficult to distinguish between parody and reality. 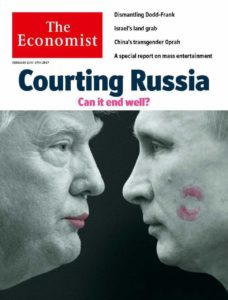 None of the signs mentioned immigration nor the Muslim issue. The main topic was Russia. There was a sign showing the Russian flag with the names “Trump” (diagonally) and “Putin” (vertically) sharing the same P, in the style of a crossword puzzle.

Another sign said “No Ruskies” and another had an upside down hammer and sickle with a diagonal line marked over it.

Another sign, which might be construed as “homophobic”, was an Economist cover showing pictures of Trump and Putin as if they had just kissed each other.

It’s weird how the Left is so anti-Russian now that the country isn’t Communist. During the Cold War, they weren’t so down on Russia when they were Communist!

Another protester had a sign which was a Der Spiegel cover, portraying Trump as having beheaded the Statue of Liberty. 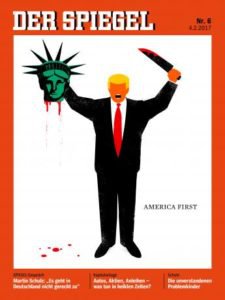 Then there was this sign, which was beyond parody. It read I got Paid Good $$ Today. How about you? Thanks Soros.  So was she admitting that Soros funds protests, or mocking the idea that he does?

My 17-year old son David did a good job arguing with a liberal woman protestor with an Obama shirt.  She was interviewing David, asking him why he supported Trump, as she (and several others) filmed him with her cell phone.

I chimed in occasionally, but David did a good job defending himself.  His interrogator would constantly switch the topic.

At one point she told him that she is 51 and he is 17, therefore she was right. And she told me that she was right because she’s a woman and I’m a man.

The topics she asked David about weren’t very specific either, she really didn’t focus on particular Trump-oriented topics.

The rally was fun.

Click here to see photos, including some of the protestors and their signs. Other links to reports on the rally are here,  here and here.