The Italian government, spearheaded by Interior Matteo Salvini, is protecting itself from the “refugee” flotillas crossing the Mediterranean, but the invaders are still besieging other places. Spain, for example. On July 18, Spain’s ABC reported the grim news: “Of all Europe, Spain has become the principal entrance point for immigration by sea” [España Ya Es La Puerta Principal De La Inmigración Que llega A La UE Por Mar (Spain Is Already The Gateway For Immigration To The EU By Sea)]. But that may be about to change.

One famous example: A load of refugees landed on the beach, abandoned their boat, and sprinted inland on foot [Migrants Land  On Spanish Beach, Flee As Tourists Look On, by Jon Nazca, Reuters, July 27, 2018]. If you’ve read Camp of the Saints, it sounds familiar. Life does, it seems, imitate art.

More than 30 illegal migrants, pursued by a police boat, landed their packed dinghy on a Spanish beach on Friday then scattered into the surrounding sand dunes and woodland.

Video footage showed the migrants, mostly young men, throwing their life-jackets overboard as they approached the shore and jumping onto the beach as sunbathers looked on.

The migrants landed on a beach near Tarifa after crossing the Strait of Gibraltar—the narrow body of water separating Morocco from mainland Europe that has become a key route for migrants.

Another entry point to Spain is not even on the European continent but the other side of the Mediterranean.

One of those points is the 7-square mile Ceuta, a peninsula on Morocco’s coast, across the Mediterranean from Britain’s Rock of Gibraltar. VDARE.com’s Brenda Walker has written about it before. Those “refugees” pass through Morocco to Ceuta.

(Note, by the way, what Reuters reported about the boat invaders. The refugees are “mostly young men.” Aren’t they supposed to be suffering women and children?)

Why can’t or won’t Morocco control its borders? Maybe for the same reason Mexico can’t or won’t stop thousands of Central Americans from passing through to the U.S. If African refugees can get into Spain’s Ceuta, then they can get to mainland Spain, and from thence, into Europe.

A fence at Ceuta separates Spain from Morocco. But the increasingly aggressive Africans are storming the barrier.

Those scenes in newspapers, on television and on the Internet, of course, directly affect politics. 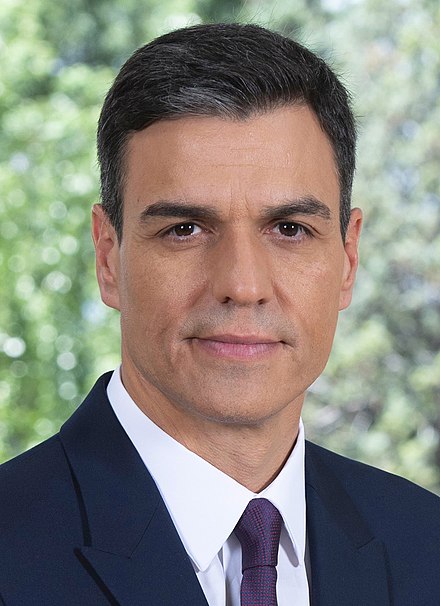 On June 1, in a no-confidence vote over a corruption scandal, parliament replaced the rightist Partido Popular (PP) with the leftist Partido Socialista Obrero Español (PSOE) [Spain’s Prime Minister, Mariano Rajoy, Is Ousted in No-Confidence Vote, by Raphael Minder, June 1]. Spain’s new prime minister, Pedro Sánchez, is the first open atheist to lead what was once the world’s greatest Catholic power.

Sánchez wants to modify the fence at Ceuta by removing the concertina wire on top because that hurts the illegal crossers. This hasn’t happened, yet the mob crossings continue. And anyway, the razor-wire doesn’t bother the hands, arms and legs of the Africans as much as it does the conscience of Señor Sánchez.

On August 22, for instance, more than 100 particularly aggressive Africans crossed the border, some hurling, according to Reuters, “a corrosive substance which left seven police officers with burns”. [Spain Returns To Morocco Migrants Who Stormed Enclave Fence, by Pablo Rodero, August 23] That’s a great way to ingratiate yourself with your hosts.

The subhead observed that the “jump coincided with the prayer previous to the Muslim festival of sacrifice” meaning the Hajj, the end-of-year annual pilgrimage to Mecca that all Muslims are expected to complete at least once in a lifetime. (VOX explained it for those who want to learn about their civilizational enemies: Hajj, The Islamic Pilgrimage To Mecca, Explained For Non-Muslims, by Jennifer Williams, August 20, 2018). 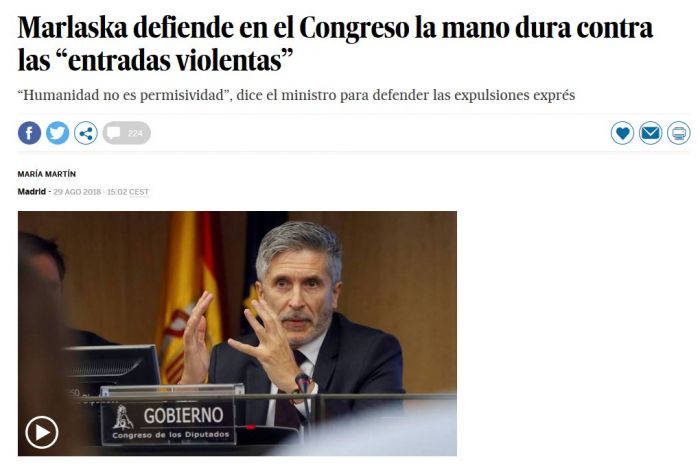 The photos show the Africans celebrating their arrival in the land of milk and honey, and their reception into CETI, a temporary residence for immigrants. Happily, the very next day, the Spanish government sent them back to Morocco. Only two minors were allowed to stay.

Naturally, the enemies of Spain and European civilization attacked the move as a human rights violation. But Spanish Interior Minister Fernando Grande-Marlaska, who, again, works for the leftist Sánchez, defended the expulsion:

Grande-Marlaska defended … the strong hand against the violent entries to Spanish territory. “To be humane is not to be permissive,” he [said]. Marlaska has not wavered in defense of the controversial decision to expel, in less than 24 hours, 116 Sub-Saharans who jumped the fence of Ceuta a week ago. “Solidarity is not compatible with violent entries and we cannot justify it because of what these persons have passed through. Those who violently attack the fence are a minority. The majority are peaceful. … We are not going to benefit the violent.”

So Sánchez got tough this time. Is it a one-off, or will the government continue deporting invaders? If so, what will Sánchez’s political base think?

Interesting times are ahead. 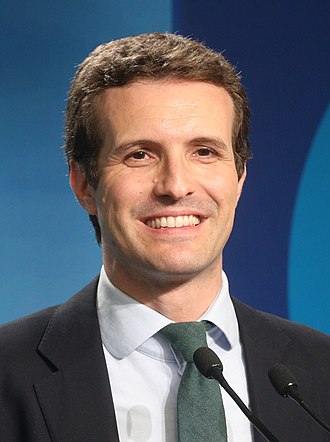 That’s because of Sánchez’s right-wing opponent, Pablo Casado (right) the new leader of the recently-ousted Partido Popular. He favors a tougher immigration policy.

In July, weeks before the refugee fence attack, the Sunday Times reported that “Spain’s new conservative leader has been compared to Matteo Salvini, Italy’s controversial interior minister, because of his comments on immigration” [Spain’s Conservative Leader Pablo Casado Is ‘Just Like Italy’s Matteo Salvini’ by Graham Keeley, July 31, 2018].

Even with its slanted headline, an English-language article in El País made Casado look pretty good [Spain’s Popular Party Stirs Fear Over The Arrival Of ‘Millions’ Of Migrants, by Natalia Junquera and Lucia Abellan,  July 30, 2018].

The recently-elected leader of Spain’s Popular Party (PP), Pablo Casado, has promised to “defend the borders” against the “millions” of undocumented migrants who want to enter Spain.

“It isn’t possible to give legal papers to everyone, nor is it for Spain to absorb the millions of Africans who come looking for a better future in Europe,” said Casado. ... “And because it’s not possible, we have to say so, even if it is politically incorrect.”

Casado accused Spanish Prime Minister Pedro Sánchez of the Socialist (PSOE) party for his stance on immigration, arguing it incites more migrants to make the dangerous journey and supports criminal organizations. Spain recently welcomed two migrant ships that had been turned away by Italy, and it also announced new legislation to allow undocumented migrants to have full access to the public healthcare system from day one.

The same is true in our hemisphere. Our porous border with Mexico has encouraged millions of Mexicans and Central Americans to gamble their lives on a long, dangerous journey to sneak into the United States. Some lose.

Casado looks at the issue on both sides of the Mediterranean:

“While Sánchez was in Valencia welcoming a boat, 1,500 migrants were arriving in Almería and Algeciras,” said Casado over the weekend. “A million migrants are waiting on the coast of Libya planning a new route through Spain.”

And Like Trump, Casado defends his country’s law enforcement officers:

“The PP is not going to allow attacks against our police officers,” Casado added, in reference to the violent border crossing of hundreds of migrants into the Spanish enclave of Ceuta last week. “We are going to support the police and Civil Guard unashamedly and undividedly.”

And that “violent border crossing” was much worse than the incursion in August under Sánchez. It involved 700-plus “migrants.”  “Migrants used homemade blow torches, quicklime, sticks and sharp objects against the police” [More Than 700 Migrants Make Violent Border Crossing Into Ceuta, by Joaquin “Quíno” Sánchez Rodríguez and Francisco Peregil, El País, July 27]. That’s an attack, not a “migration.”

Spain could be a bulwark for the defense of Europe and join Italy in protecting the Mediterranean coast. The alternative is more invasion, and the Islamic transformation of Europe.

Spaniards must summon the courage of their heroic ancestors who fought the Moors for centuries to reconquer their country. Why do they call Christopher Columbus The Last Crusader? Because he sailed for The New World, partly, to find treasure to pay for another quest to reconquer The Holy Land.

Those Spanish monarchs, warriors and explorers were heroes, not just of Spain, but of Western Civilization.

How about it, Spaniards?