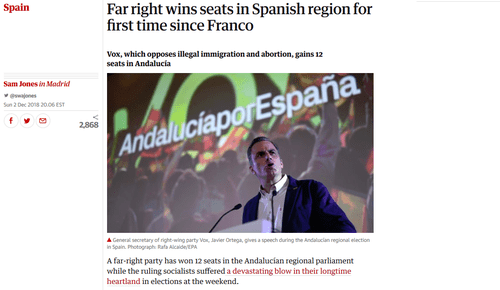 You may have heard a faint wailing in the last few hours. That's coming from the anti-Western journalists as nationalist populism reaches another European country.

Here's some typically balanced coverage from the fanatics at The Guardian.

A far-right party has won seats in a Spanish regional parliament for the first time since the country returned to democracy following the death of longtime dictator Francisco Franco in 1975.

With 99% of the votes counted in Andalucía, the small Vox party took 12 seats in the 109-member regional parliament.

The Socialists won the election, but saw their support plummet to just 33 seats, compared to 47 in 2015 – far from the majority of 55 seats needed to govern.

The result means that Vox, which opposes illegal immigration and Catalan independence, has exceeded even the most optimistic poll predictions which had forecast a possible five seat win. The party’s platform includes restricting abortion and rolling back domestic violence laws.

Vox had not previously held any seats in any legislative body in Spain since its founding four years ago, and now it has the key to forming a government in the nation’s most populated region.

“Now is the moment to say loud and clear who we are and that we have come to stay,” Vox candidate Francisco Serrano told a crowd of supporters who chanted: “Spain! Spain! Spain!”

Needless to say, the head of the Socialists is calling for a united front of all the other parties against the "extreme Right." But this is actually a good thing for Vox. Vox can present itself as the one true anti-System party, with all the others simply serving as controlled opposition.

Of course, this might also be an effort by the Socialists to simply scare away the center-right parties from working with Vox. Breitbart notes a coalition government in the region is possible.

Of the other parties, the left-wing Podemos is estimated to have only 17 seats, the somewhat right-leaning Ciudadanos 21, and the nominally conservative People’s Party 26.

This means that the left could lose control of the regional parliament without enough allied parties, with Ciudadanos and the People’s Party able to form a union with the backing of VOX and others to gain a functioning majority.

VOX voters are said to have come from both the left and the right, disenfranchised by establishment politics, with one voter telling AFP that Spain was “getting worse” under the Socialists.

Whether the other parties will work with Vox, and whether Vox chooses to work with anyone or stay in permanent opposition, could well determine the future of the nationalist Right in Spain. Still, the fact that they more than doubled their expected total shows they may have more support than even they themselves had suspected.