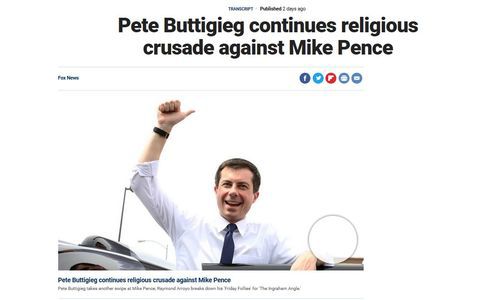 Patrick J. Buchanan: Mayor Pete and the Crackup of Christianity

"(T)here is nothing either good or bad, but thinking makes it so," said Hamlet, who thereby raised some crucial questions:

Is moral truth subjective? Does it change with changing times and changing attitudes? Or is there a higher law, a permanent law, God's law, immutable and eternal, to which man's law should conform?

Are, for example, the Ten Commandments of the Old Testament, Christian teaching and natural law unchangeable and applicable to all men at all times? Or can some of the 10 be consigned to the dumpster of antiquated moral prohibitions?

This question has been brought straight into the presidential primaries by Pete Buttigieg, breakout star of the spring of 2019.

"Mayor Pete" is proudly gay and living happily with his husband.

He says God made him the way he is, and he is living the life God intended for him. Raising the same-sex marriage issue himself, the mayor defiantly taunted Mike Pence:

"Yes, Mr. Vice President ... it has moved me closer to God. ... That's the thing I wish the Mike Pences of the world would understand: That if you have a problem with who I am, your quarrel is not with me. ...Your quarrel, sir, is with my creator."

Buttigieg declared his candidacy Sunday, and his bid ensures that America's deepening moral divide will be front and center in 2020.

Our culture wars will not be ending anytime soon.

This weekend, General Social Survey data revealed that Americans who profess to have "no religion," 23.1%, now exceed Catholics, our largest religion with 23%, and Evangelicals at 22.5%. And the "nones" have grown by 266% since 1991.

As for the mainstream Protestant congregations, together, they are not half as numerous as those Americans who profess no religion.

Added to our racial and ethnic diversity, America is growing more diverse religiously, de-Christianizing with all deliberate speed.

We are becoming another people, and a post-Christian America appears to be our destiny well before the end of this century.

Consider what has changed already.

In the 19th century, blasphemy was a crime.

In the Roaring '20s the "vices" of booze and gambling were outlawed. Now they are major sources of state revenue.

Divorce was a rarity. Now half of all marriages are dissolved.

After the sexual revolution of the '60s, births out of wedlock rocketed to where 40 percent of all children are born without a father in the home, as are half of Hispanics and 70 percent of all black children.

In the lifetime of many Americans, homosexuality and abortion were still scandalous crimes. They are now cherished constitutional rights.

Yet, Mayor Pete's assertion—that God made him gay, and God intended that he live his life this way, and that this life is moral and good—is another milestone on the road to a new America.

For what Buttigieg is saying is that either God changes his moral law to conform to the changing behavior of mankind or that, for 2,000 years, Christian preaching and practice toward homosexuals has been bigoted, injurious and morally indefensible.

If Pete is right, since the time of Christ, Christians have ostracized and persecuted gays simply for being and behaving as God intended.

And if that is true, what is the defense of Christianity?

Already, among a good slice of America, especially the young, the West is guilty of centuries of racism, imperialism, colonialism, slavery, sexism, ethnic cleansing, religious persecution and cultural genocide against indigenous peoples.

Now, according to Mayor Pete's logic, the West is also guilty of centuries of hateful homophobia toward people living as God made them and intended them to live.

While Democrats defend Mayor Pete's same-sex marriage as moral, they will also insist that women's "reproductive rights" remain sacrosanct, and that unborn infants, 60 million of whom have been killed in the womb since Roe v. Wade in 1973, still have no rights at all, not even the right to life.

How does a nation so divided ever come together again?

How can a nation, many of whose elites are so ashamed of its history and heritage and deplorable other half—as "racist, sexist, homophobic, xenophobic, Islamophobic ... and bigoted"—credibly claim to be a shining city on a hill or a light unto the nations?

America is today as powerful, prosperous and free as any nation the world has ever seen. And we have used that wealth and freedom to create a culture and a society many of our own people and much of the world now see as dissolute and decadent.

Post-Christian America, in many ways, is beginning to mirror what we were once taught that the pre-Christian Roman Empire looked like.

Indeed, if the mayor's lifestyle is moral, Christianity got it wrong for 20 centuries.