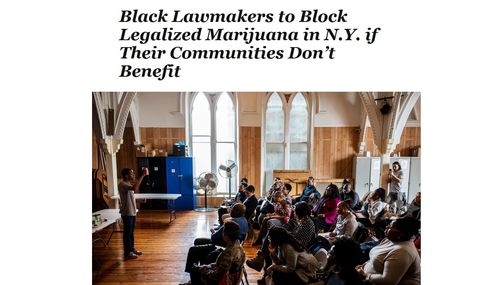 An idea that first started popping up in the iSteve comments section five or ten years ago is now sweeping Respectable Opinion. From the New York Times:

Black Lawmakers to Block Legalized Marijuana in N.Y. if Their Communities Don’t Benefit

At a recent conference in Brooklyn on marijuana legalization, Jacob Plowden, left, spoke about the lack of diversity and inclusion in the cannabis industry.

Diversity and inclusion in the cannabis industry are all very well, but what about … belonging? Harvard now has a Department of Diversity, Inclusion, and Belonging, and if DIBs are good enough for Harvard, we also need to worry about who gets DIBs on dope.

Black lawmakers and activists are blocking a push to legalize recreational marijuana in New York, warning that Gov. Andrew M. Cuomo’s proposal could perpetuate the racial inequality that it purports to fight.

The lawmakers say that unless people of color are guaranteed a share of the potentially $3 billion industry, there may be no legalization this year. They want to be assured that some of that money will go toward job training programs, and that minority entrepreneurs will receive licenses to cultivate or sell the marijuana.

Ten states and Washington, D.C., have legalized recreational marijuana, and as lawmakers elsewhere consider their own laws, they seem intent on not repeating what they see as the mistakes of some early adopters.

They say one misstep, in particular, stands out: None of the 10 states or Washington ensured that minority communities, which were often targeted for low-level drug possession, would share in any economic windfall of legalization.

In New York, the question of economic return for those communities has emerged as a defining, and perhaps pivotal, issue. …

Critics say marijuana legalization has fostered an inequitable system in which wealthy, white investors often reap the profits of the fledgling industry.

In Colorado, black entrepreneurs said they were banned from winning licenses because of marijuana-related convictions. Black people make up just a handful of the thousands of cultivation or dispensary license holders there, and continue to be arrested on marijuana-related charges at almost three times the rate of white people.

In California, several cities introduced equity programs retroactively. Oakland now requires at least half of licenses to go to people with a cannabis-related conviction and who fell below an income threshold.…

The debate in New York is unfurling as at least three Democratic presidential candidates — Senators Kamala Harris of California and Elizabeth Warren of Massachusetts, and Julian Castro — have said they support reparations for African-Americans. Representative Alexandria Ocasio-Cortez recently called for “affirmative action” licensing for entrepreneurs of color in the marijuana industry.

Senator Cory Booker of New Jersey, another presidential candidate, has introduced a bill to legalize marijuana nationwide. Co-sponsored by four other Democratic presidential hopefuls, including Senator Kirsten Gillibrand of New York, it includes provisions for job investment in minority communities.

If reinvestment initiatives are not put in place alongside legalization, the underground market is likely to remain, said Dasheeda Dawson, the chief executive of MJM Strategy, a cannabis consulting and marketing firm.

“The industry right now reads as very white,” Ms. Dawson said. “If I’m in the hood and I’m hooking up my man with revenue by purchasing from him, I’m going to continue to buy black.”

I dream of a future in which all the legal marijuana shops are dingy storefronts run by black stoners between 10am to 3pm, while white people surreptitiously buy 10 kilos at a time of laboratory-grown British Columbian dope that fell off the back of a Costco truck.