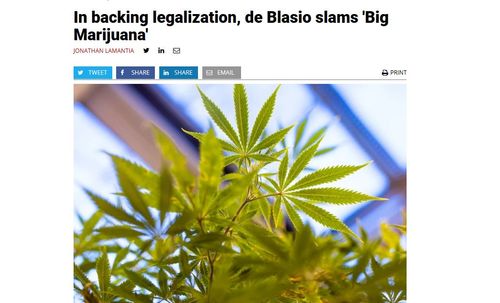 Bloomberg News
Mayor Bill de Blasio is all for legalizing recreational use of marijuana, as long as corporations don’t get rich in the process.

The mayor on Thursday announced his support for a state plan to make recreational marijuana accessible to adults, but his instructions for Gov. Andrew Cuomo were clear—don’t let corporate cannabis take over the market.

Instead, de Blasio said, the industry should be led by local small businesses, and efforts should be made to promote the involvement of black and Hispanic residents who have accounted for a disproportionate number of arrests for possession of marijuana despite similar consumption rates as white New Yorkers.

If we are going to have legal drugs, I don’t want highly efficient giant corporations using the magic of the market to sell a pound of Lipton brand marijuana for $24.99 at Walmart or a quarter kilo of Coca-Cola brand cocaine at Costco for $199.99, I want America served by dingy shops owned and operated by characters out of a 1970s Cheech & Chong movie. I want the full might of the regulatory state focused on the marijuana industry to be as diverse as imaginable, with physically handicapped shelf-stockers and mentally handicapped bookkeepers.

Be careful what you wish for. In the Netherlands, which decriminalized pot way back in the 1970s, the only sales channel is through small “coffee shops”, staffed by stoners themselves. The result is that they’re rather cool places to be: the vibe is relaxed, the staff are knowledgeable and interested in their product, and there isn’t that modern restaurant habit of trying to make you pay and leave as quickly as possible.

While that would be great in a restaurant, it’s probably not a good thing to have a cannabis store which is actually a more enjoyable place than a Starbucks. I’d rather have pot sold under the DMV model: bored black women serving slow-moving lines in a gray-brown office, 9-5 only. Obtaining drugs shouldn’t be enjoyable.

Maybe the Department of Motor Vehicles should have a monopoly on the prostitution business as well? “You want what? That’s disgusting. Okay, stand in this line. … Or maybe that line. You figure it out.”