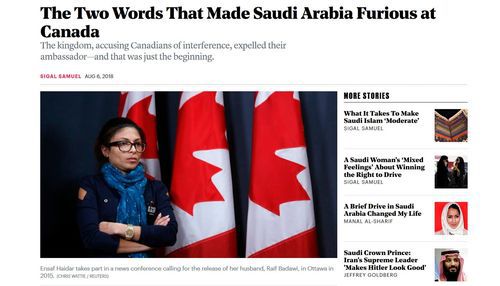 The two words the Atlantic is talking about above are "immediately release" but really is's one word--sovereignty. 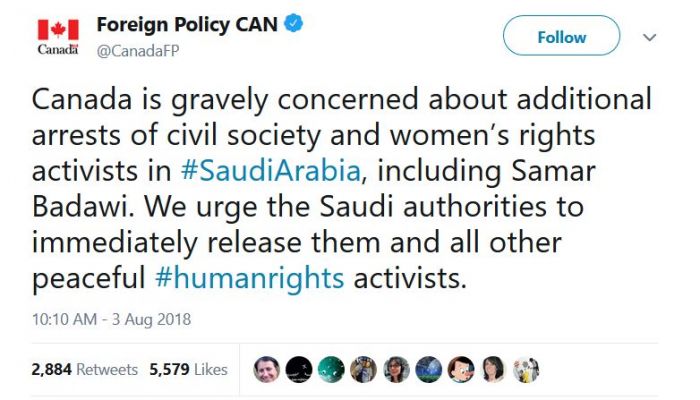 Is it any of Canada's business whether Saudi women have the right to drive?

Well, Foreign Minister Chrystia Freeland just made it her business.

The Saudis responded by expelling Canada's ambassador and ordering 15,000 Saudi students to end their studies in Canada and barred imports of Canadian wheat. A $15 billion contract to provide armored vehicles to Saudi Arabia may be in jeopardy.

Crown Prince Mohammad bin Salman, who has been backsliding on his promises to modernize the kingdom, appears to have had enough of Western lectures on democratic values and morality.

A week after Pope Francis denounced the death penalty as always "impermissible," Riyadh went ahead and crucified a convicted murderer in Mecca. In Saudi Arabia, homosexuality can get you a death sentence.

Neither President Donald Trump nor the State Department has taken sides, but The Washington Post has weighed in with an editorial: "Human Rights Are Everyone's Business."

"What Ms. Freeland and Canada correctly understand is that human rights ... are universal values, not the property of kings and dictators to arbitrarily grant and remove on a whim. Saudi Arabia's long-standing practice of denying basic rights to citizens, especially women—and its particularly cruel treatment of some dissidents—such as the public lashes meted out to (Ms. Badawi's brother)—are matters of legitimate concern to all democracies and free societies.

"It is the traditional role of the United States to defend universal values everywhere they are trampled upon and to show bullying autocrats they cannot get away with hiding their dirty work behind closed doors."

The Post called on the foreign ministers of all Group of Seven nations to retweet Freeland's post saying, "Basic rights are everybody's business."

But these sweeping assertions raise not a few questions.

Who determines what are "basic rights" or "universal values"?

Saudi Arabia is an absolute monarchy that has never permitted women to drive and has always whipped criminals and had a death penalty.

When did these practices first begin to contradict "universal values"?

When did it become America's "traditional role" to defend women's right to drive automobiles in every country, when women had no right to vote in America until after World War I?

In the America of the 1950s, homosexuality and abortion were regarded as shameful offenses and serious crimes. Now abortion and homosexuality have been declared constitutional rights.

Are they basic human rights? To whom? Do 55 million abortions in the U.S. in 45 years not raise an issue of human rights?

Has it become the moral duty of the U.S. government to champion abortion and LGBT rights worldwide, when a goodly slice of America still regards them as marks of national decadence and decline?

And if the Saudis are reactionaries whom we should join Canada in condemning, why are we dreaming up an "Arab NATO" in which Saudi Arabia would be a treaty ally alongside whom we would fight Iran?

Iran, at least, holds quadrennial elections, and Iranian women seem less restricted and anti-regime demonstrations more tolerated than they are in Saudi Arabia.

Consider our own history.

From 1865 to 1965, segregation was the law in the American South. Did those denials of civil and political rights justify foreign intervention in the internal affairs of the United States?

How would President Eisenhower, who used troops to integrate Little Rock High, have responded to the British and French demanding that America end segregation now?

In a newly de-Christianized America, all religions are to be treated equally and none may be taught in any public school.

In nearly 50 nations, however, Muslims are the majority, and they believe there is but one God, Allah, and Muhammad is his prophet, and all other religions are false. Do Muslims have no right to insist upon the primacy of their faith in the nations they rule?

Is Western interference with this claim not a formula for endless conflict? 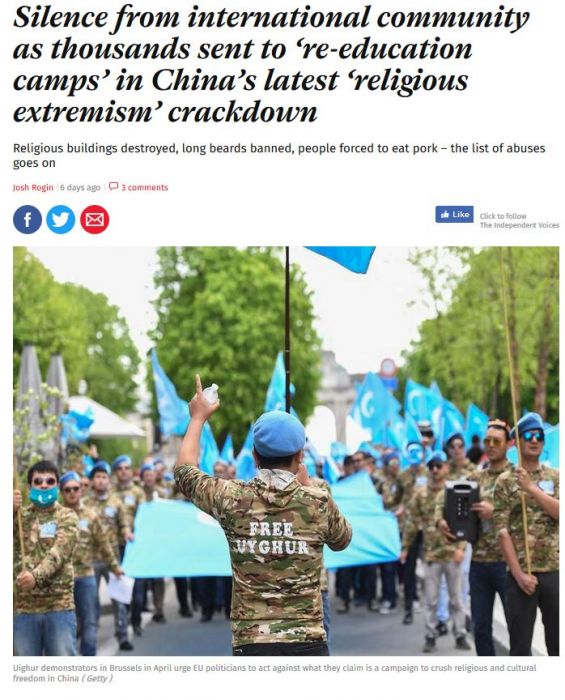 In America, free speech and freedom of the press are guaranteed. And these First Amendment rights protect libel, slander, filthy language, blasphemy, pornography, flag burning and published attacks on religious beliefs, our country itself, and the government of the United States.

If other nations reject such freedoms as suicidal stupidity, do we have some obligation to intervene in their internal affairs to promote them?

"Since last year, hundreds of thousands – and perhaps millions – of innocent Uighurs and other ethnic minorities in the Xinjiang region in northwest China have been unjustly arrested and imprisoned in what the Chinese government calls “political re-education camps”. Thousands have disappeared. There are credible reports of torture and death among the prisoners. ... The international community has largely reacted with silence."

Anyone up for sanctioning Xi Jinping's China?

Or do Uighurs' rights rank below those of Saudi feminists?