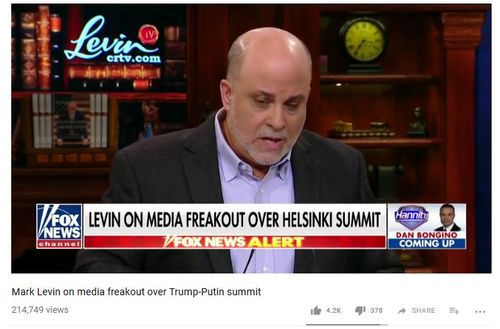 Mark Levin Reviews the Democrat History of Treachery since WWII.

Thanks to author Mark Levin for an instructive rant against the Democrats’ condemnation of President Trump for a dumb misstatement about Russia’s meddling in the 2016 American election.

Appearing on the Hannity show Tuesday, Levin let loose with a short but impassioned chronicle of Democrat electoral sleaze, selling out European allies and downright anti-American activities with the Soviet Union during the Cold War. It’s quite the briefo history lesson.

Below, at the 1945 Yalta Conference, the big three leaders declared a liberated Europe would be the blueprint for postwar organization where nations could choose their own governments. But when Stalin encouraged the eastern nations to be communist buffer states to the Soviet Union, the west let it slide. 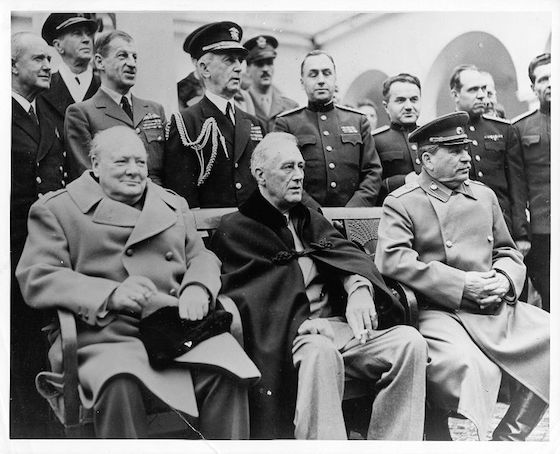 MARK LEVIN: What we’ve learned about the media, several of the hosts and guests, is we have a lot of psychopaths out there, that’s for sure. . . comparing the president’s conference with Putin to Pearl Harbor, 9/11, Krystallnacht, the beginning of the Holocaust, calling him a traitor and treasonous. Two weeks ago they said he was running Japanese internment camps and Nazi concentration camps.

This is the pseudo media and now comes to Russia: now the Liberals, the media, the Democrats, some Republicans very upset about Russia. They’ve had more positions on Russia than Stormy Daniels, as far as I’m concerned. Let me point out some history that is very very important. John McCain — god bless him — and others have said that what Trump did at that press conference is the worst interaction we’ve ever had with Russia, the worst diplomatic disaster ever.

I want the American people — forget about the meeting — I want you to know something: in 1945 at the Yalta Conference, Franklin Roosevelt sold out half of Europe to Stalin. He repeatedly praised Stalin. Franklin Roosevelt is the hero of the Democrat Party — he of Japanese internment camps — in Yalta, he gave up half of Europe to the Soviet Union. In 1961, JFK met with Khrushchev. JFK told a friend of his that he was rolled over, that he came across weak, that it was pretty disastrous, his meeting with Khrushchev. And a few weeks later, what do they do? The Soviets are shipping missiles to Cuba and they’re building a wall in Berlin. In 1975, Gerald Ford in Helsinki with Brezhnev, 35 other countries recognized recognize the territorial sovereignty of the Soviet Union which included the captive nations of Eastern Europe. In 1979, Jimmy Carter placed a big wet kiss on Brezhnev’s cheek in Vienna.

All this hysteria about this press conference — the president said, look I could have said it better, I should have said this, and they act like it’s the apocalypse. It’s not.

The left in this country’s defended the Rosenbergs, they defended Alger Hiss, they defended Ted Kennedy in 1983 and four when he was colluding with the Kremlin to defeat Reagan. The left, the Democrats, the media in this country, opposed SDI the Strategic Defense Initiative which had as its purpose to defend us against Russian nuclear missiles. They called it Star Wars. To this day, the left won’t fund it; to this day, the Democrat Party opposes it. They opposed his Pershing Two missiles to modernize medium-range nuclear missiles which he eventually put in Europe again to defeat the Soviet Union. . . .

Levin follows with an impressive list of what President Trump has done in 18 months to strengthen America’s national security.

A fair accounting of which side has protected US values and safety isn’t even close: Democrats have consistently acted contrary to the well being of Americans, which shows up today in their preference for immigrants and illegal aliens.