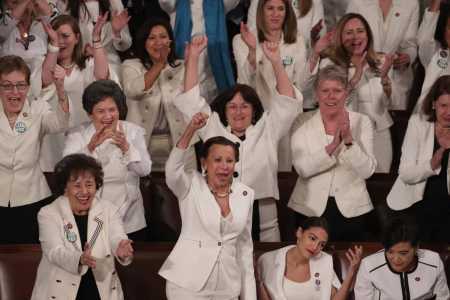 Where SOTU is concerned I am a strong proponent of the President just mailing it in.

From a vague sense of duty I watched the first few minutes of last night's show. I didn't make it to the point where our President said, "America will never be a socialist country."

I did, though, get a glimpse of those ranks and files of Gyno-Americans all in white. What came to mind? Chapter 5 of We Are Doomed, that's what. 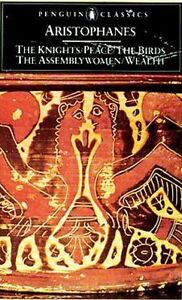 The "gender gap" in political attitudes has been remarked on since at least 391 b.c.  That was the year Aristophanes staged his play "The Assemblywomen" (Ecclesiazusae).  In the play the women of Athens, disguised as men, take over the assembly and vote themselves into power.  Once in charge, they institute a program of pure socialism:

"Everyone is to have an equal share in everything and live on that; we won't have one man rich while another lives in penury, one man farming hundreds of acres while another hasn't got enough land to get buried in ... No one will be motivated by need: everybody will have everything ... the children will regard all older men as fathers ..." — from Alan Sommerstein's translation for Penguin Classics.

Aristophanes' intent was ribald comedy.  The wrinkled old hags of the city are soon demanding equal sexual access to the handsome young men, a thing that even a modern American liberal — a male one, at any rate — might regard as taking the doctrine of universal entitlement a bit too far.  The playwright grasped the essential point, though:  women incline to socialism much more naturally than do men.