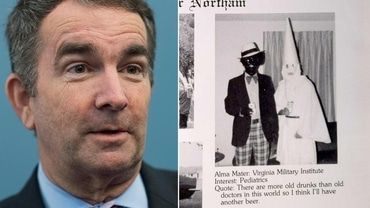 Mark Steyn pointed out something I hadn't realized--that the yearbook leak against Ralph Northam was done by a medical school colleague appalled by the Governor's abortion support.

A former medical colleague of Governor Ralph Northam, disgusted by the Democrat governor's enthusiasm for infanticide, leaked the old yearbook photo of him allegedly in blackface. (In turn, Lieutenant-Governor Fairfax now accuses Governor Northam of leaking details of the Democrat lieutenant-governor's #MeToo problem to prevent his succession.) The media's position on all of this is that it's cool to be pro-infanticide but not if you did minstrel jokes four decades ago.

You can see Steyn talk about this with Tucker Carlson here:

The lads at Huffington Post didn't care for the cut of my jib—which kind of made Tucker's point: that in America we're obligated to talk about these issues incessantly but only in the most absurd and trivial ways.

Tucker Carlson Guest Calls Ralph Northam Controversy ‘A Kind Of Minstrel Show’
"In that we're sort of putting on a show about being concerned about black people," Mark Steyn told the Fox News host.

Of course Steyn's right—(a) this is about GoodWhites posturing against  BadWhites, not about blacks at all, and (b) apparently the only guy at the top levels of Virginia's Democratic Administration who didn't black up at some point is alleged rapist Justin Fairfax, who is naturally black.

BREAKING: Virginia's Democratic AG Mark Herring, who called on Virginia Gov. Ralph Northam to resign over wearing blackface, has admitted he also wore blackface to a party in the 1980s.https://t.co/JvhHb3Fh9P

More about why the yearbook photo dropped below:

Never forget: none of this would be happening in Virginia right now if Kathy Tran hadn't introduced a bill to legalize abortion all the way up until birth. A bill that was going nowhere in the statehouse. That's what made Northam's med-school classmate drop the dime on him.