One of the Open Borders Lobby’s most constant refrains is that immigrants come here for jobs, not welfare. A few examples: As coming for work does not preclude immigrants from obtaining welfare, these are not mutually exclusive possibilities. In fact, 75% of the “working poor” in America are on welfare. [Working, But Needing Public Assistance Anyway, By Patricia Cohen, NYT, April 12, 2015]. Thus importing low skilled workers to fill low wage jobs will also likely swell the welfare state.

Sure enough, a recent Center for Immigration Studies analysis by Steve Camarota finds just that. [Welfare Use by Immigrant and Native Households, September 2015]. According to the study, 51% of immigrant-headed households use some form of means tested welfare, including direct cash assistance, food stamps, Medicaid, and subsidized housing. (Note that this is Census data and includes both legal and illegal immigrants).

In contrast, only 30% of native-born American headed-households received welfare.

Many welfare programs exclusively benefit families with children, which immigrants, legal and illegal, are more likely to have. Yet even only looking at households with children, immigrants have a 24% higher welfare usage rate than native born.

CIS actually buried one of the most explosive findings. Although it does not actually discuss the data, the CIS study includes one table that breaks down welfare use by race and immigration status, as well as the nation of origin for immigrant-headed households. 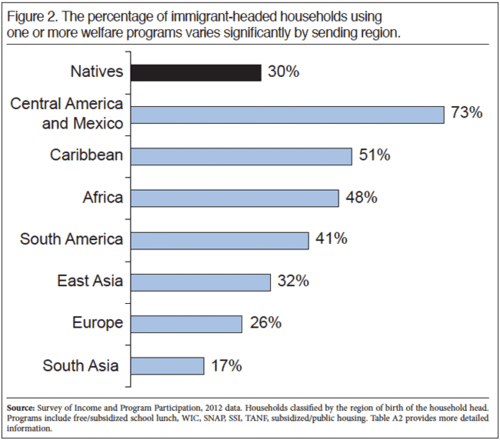 And blacks and Hispanics drive up the welfare rate amongst non-immigrants dramatically. Only 23% of non-immigrant white-headed households (the group formerly known as “Americans”) are on welfare.

In other words: Hispanic immigrants, legal and illegal, are over three times more likely to be on welfare than native-born whites.

Immediately, the Open Borders gang has pushed back against the study. The first response came from Alex Nowrasteh [Email him] of the Cato Institute. [Center for Immigration Studies Report Exaggerates Immigrant Welfare Use, September 2, 2015] Nowrasteh does not question any of CIS’s data, but attempts four spurious rebuttals to its methodology:

Of course, the children of immigrants would not be receiving welfare to begin with if their parents had not immigrated, so this should be included in the cost of immigration. Moreover many welfare programs ostensibly bar illegal immigrants and recently arrived legal immigrants from benefits (more on this below). However, their US-born anchor babies are eligible. As Nowrasteh and co. support birthright citizenship, they should own up to its costs.

Nowrasteh also attempts a reductio ad absurdum, asking “shouldn’t we also count the welfare use of grandchildren, great-grandchildren, and great-great-grandchildren of immigrants?” But given the failures of third generation Hispanics to assimilate compared to European immigrants, Nowrasteh should be careful for what he wishes for (See Hispanic Family Values? By Heather Mac Donald, City Journal, Autumn 2006).

Of course, in reality it’s difficult to track the costs of immigrant households through multiple generations. Furthermore, CIS and other immigration patriots do not argue that immigration per se is bad. Rather we argue that post-1965 has been problematic, because of its scale and current policy’s perverse selection mechanisms. So it doesn’t make any sense to consider more than one or two generations.

This is by far Nowrasteh’s most frivolous argument. It’s akin to claiming that a study on incarceration rates should control for crime rates or a study on SAT scores should control for intelligence. Immigrants are on welfare because they are poor. No-one suggests that immigrants have high welfare rates because they are immigrants. They have high welfare rates because current policy in effect selects those with low skills, who go on to make low wages and thus end up impoverished.

This is Nowrasteh’s only point that is not self-evidently wrong—but it’s still not a valid criticism. Needless to say, any study could benefit from more data or analysis. But Nowrasteh does not give any good reason to suspect that having this information would contradict Camarota’s findings.

Camarota’s study found that the immigrant-American disparity exists throughout virtually all the means-tested welfare, so one cannot claim that a relatively small program (such as school lunches) distorted the immigrant welfare use. Significantly, the disparity was almost identical in the most costly program—Medicaid.

The only reason Nowrasteh offers to support the suggestion that the cash value of immigrant welfare programs would be lower is that “the cash value for many welfare benefits are determined by the number of eligible members living in the household. If only half of the members of a household are eligible then the benefits are reduced.” Because immigrants are not eligible for some welfare programs, he believes this to be the case.

Of course, if this were true, it would be a strong reason to oppose Amnesty, which would make the entire immigrant household eligible. Moreover, Nowrasteh concedes elsewhere in his attempted rebuttal that the average immigrant household has more children than native household—which could just as well make the immigrant-headed households consume more cash value.

90% of all Americans over 65 receive Social Security benefits. The few who do not never worked in their life. Counting these programs would be like counting people who benefit from public schools as welfare participants. Unlike means-tested welfare, which evidences poverty and a lack of economic assimilation of its recipients, all Americans pay into the Social Security and Medicare. Libertarians at the Cato Institute may not like these programs, but because they are near-universal their usage rates reveals nothing about the economic performance of a demographic group.

Nowrasteh’s criticisms should be self-evidently laughable, but the Open Borders echo chamber immediately went into action championing them. Ali Noorani of the National Immigration Forum, tweeted this:

The Personal Responsibility and Work Opportunity Reconciliation Act of 1996 cut back on welfare extended to immigrants. It categorized green card holders and refugees granted asylum as “qualified,” and all other immigrants—including undocumented workers and many people lawfully here in the United States—as “not qualified” and therefore ineligible for welfare. But the law stipulated that even qualified immigrants had to spend five years in the United States before they could apply for benefits like Medicaid, food stamps, or cash assistance for families with children. [Immigrants Don't Drain Welfare. They Fund It., September 3, 2015]

But CIS took its data from the US Census’s Survey of Income and Program Participation. None of CIS’ critics question these figures. Thus, all that Reston’s pointing out Congress’ 1996 bar shows is a combination of the following: But that’s how it is with America’s immigration “debate.” Patriots like the Center for Immigration Studies have to understate their findings. Immigration enthusiasts like the New Republic, Cato Institute, and National Immigration Forum can get away with worthless criticisms.

As Peter Brimelow used to say at National Review before Bill Buckley purged it of immigration patriots, being an immigration enthusiast means never having to say you’re sorry.