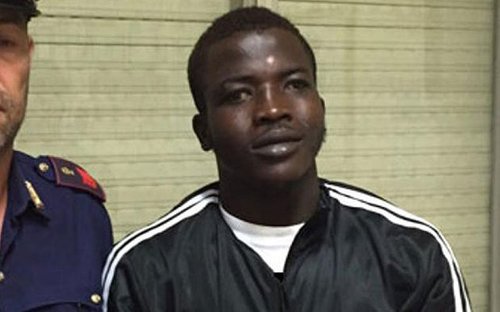 Another brilliant success for the pro-invasion forces who seek to turn Europe into an extension of Africa.

Mamadou Kamara, an 18-year-old from the Ivory Coast, allegedly slit the throat of Vincenzo Solano, 68, and then attacked his Spanish-born wife, Mercedes Ibanez, 70.

Ms Ibanez fell to her death from a second-floor balcony, during a robbery that turned violent.

Mr Kamara is one of thousands of migrants and refugees living at a vast reception centre at nearby Mineo, in south-eastern Sicily.

They are accommodated there after arriving by boat from Libya, and wait sometimes for months to have their asylum applications assessed.

Of course, this is another example of Gaddafi's Revenge, as African invaders were kept out of Europe by the Libyans as long as he was in power. Kamara was "rescued" from the Mediterranean, and now his rescuers have blood on their hands. One begins to wonder if Gaddafi was actually targeted because he was an obstacle to the African annexation of Europe.

The "refugee" in this case is not a helpless old woman or young child but an eighteen year old male, i.e. the least vulnerable demographic possible. He's also from the Ivory Coast, a country that is not in the midst of revolution or civil war. It is simply a less desirable place to live than Europe. If he is a legitimate "refugee," than the word has no meaning and every Third Worlder on the planet has a "right" to be in Europe. And that seems to be the goal.

Needless to say, local officials and the press aren't terribly concerned about the slaughtered couple. They were old and white after all and probably deserved it for being privileged. The real problem is that the case may create opposition to this plan of African colonization.

Sebastian Maccarrone, the director of the Mineo migrant centre, said: "If it was him, it is a tragedy within a tragedy - for the people killed, and for integration. We are all shocked. I have spoken with many migrants and they all want to disassociate themselves from what happened.

"For each small step we have taken forward in terms of integration, this has put us 10 steps backwards."

Sounds familiar. Our diversity, not only in Sicily, but in Europe, is a strength. And as horrific as this tragedy was, if our diversity becomes a casualty, I think that's worse. Something like that, right?

The good news is that there are signs of resistance from the Italian Right.

Giorgia Meloni, another centre-Right politician and a close ally of Silvio Berlusconi, the former prime minister, said: “The instigator of the murder of these two innocents is the Italian state, which is responsible for having kept open a facility ... which we said should be closed down.”

But as there are no elections scheduled until 2018, unless the government collapses. By that point, Metternich's description of Italy as simply a "geographic expression" rather than a country may once again express a geopolitical truth.

MSM Backlash LibelCamp Of The Saints
<< Previous
Next >>
LATEST