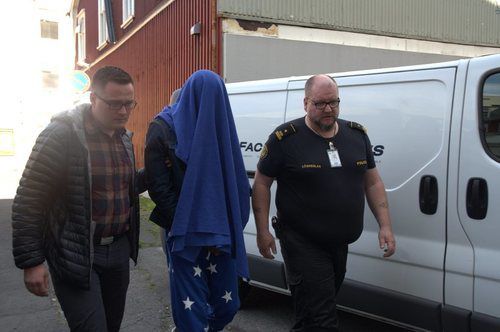 For this report of an African asylum seeker infecting women in Iceland with HIV, the English Language Iceland Monitor uses the the traditional "Man Arrested" style, but says the accused is of "foreign extraction". (You can't tell what race he is, because the police have put a blanket over his head, above.)

Police have arrested a man, said to be of foreign extraction, on suspicion of deliberately infecting young women in Iceland with HIV, the virus that causes AIDS.

Police are currently investigating the case, particularly as regards whether or not more women may have been in contact with the man and also been infected.

No details have yet been released on how the women involved were infected. The most usual channels of HIV infection are sexual intercourse and sharing syringes and needles.Man arrested for HIV infections, July 23, 2015

A Google Translate of that is is headed, correcting some automated language translation, "Suspected of infecting women with HIV." and says he's a Nigerian asylum seeker who arrived in Iceland last August. No word about the race of the victims.