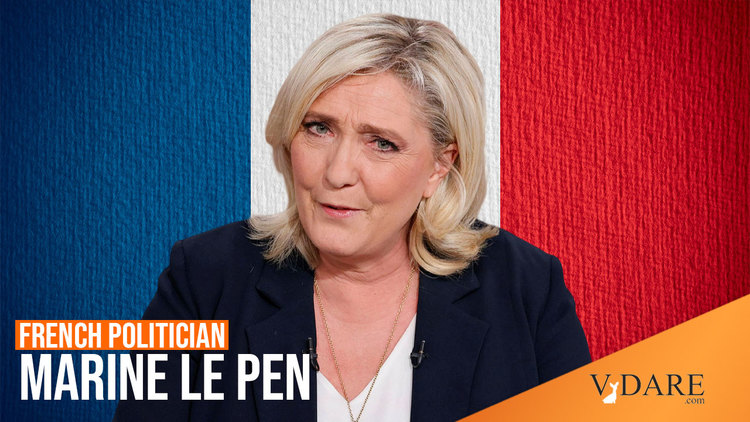 The Rise of Marine Le Pen in France Continues

The French National Front goes from strength to strength, as Marine Le Pen's party has won its first seats in the French Senate.

Breitbart mostly spins the event as a repudiation of Socialist Francois Holland.

In a further blow to his credibility, French President Francois Hollande's ruling Socialist Party has lost control of France's Senate, allowing the National Front to pick up seats for the first time.  The victory for the far right party marks their third significant electoral gain this year, and confirms their ascent into mainstream French politics.

As the results were announced, the National Front was jubilant. Their leader Marine Le Pen, who is credited for turning the party around and making it a credible force in French politics, hailed the result as “a great victory, an absolutely historic victory”, which would be a “breath of fresh air in a rather sleepy chamber”.

“With every day that passes, our ideas are making progress,” she told BFMTV. In March, the party took control of twelve municipalities, and just two months later stormed into the lead in the European Elections, knocking the centre right UMP (former President Nicolas Sarkozy’s party) into second place...

The loss is yet another blow for the failing Hollande administration, which has been beset by soaring unemployment, a huge and growing deficit, unpopularity over heavy taxes and, most recently, a scandal in which Hollande’s ex-partner accused him of being a ‘caviar socialist’ who mocks the poor.

Hollande’s popularity is now at an unprecedented low of just 13%.

What is perhaps more interesting is the reaction in the comments section of Breitbart.  The highest rated comment reads

Allez Marine! Allez la France! And Donna, please stop labeling the Front National as "far right", that is a BBC, Guardian and mainstream media slur. If you look at the party's economic policies, for example, you'll see it is statist, dirigiste and thus typiquement French.

While many of the comments at Breitbart are uncomfortable with the FN's interventionist economic model, they mostly seem to approve the rise of a party that promises to combat Islamization.