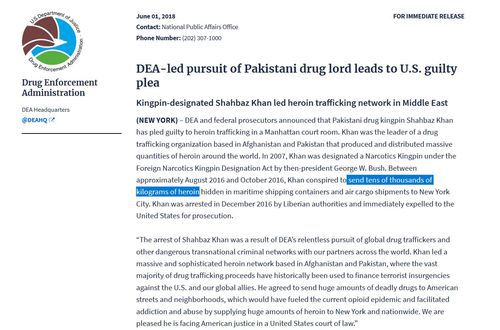 The Drug Enforcement Agency (DEA) is increasingly becoming as vital to national peace and security as ICE. I am not without my libertarian sympathies, and disapprove of the DEA’s harassing dispensaries of marijuana (which I think should be legal). But much as ICE largely targets only the worst criminal aliens, the DEA largely targets only the most vile elements of the drug trade. Right now, that means stamping out the production and distribution of heroin and various opioids such as fentanyl. And, although the implication is not usually spelled out, that means resisting Open Borders.

Overdoses, remember, are the number one cause of death for Americans under the age of fifty—and this plague disproportionately affects whites. While the “opioid crisis” is talked about regularly, and (appropriately) with great gravitas by the Mainstream Media [The Poison We Pick, By Andrew Sullivan, NYMag, February 20, 2018], they rarely talk about the footsoldiers leading the counter-attack—namely the DEA.

With an annual budget of only two billion dollars, and about 10,000 employees, the DEA is a small agency. ICE, which is not considered big either, has twice as many employees and nearly four times as much money. But the DEA is still a force to be reckoned with. This July, in the Bronx, agents seized about 55 pounds of heroin and fentanyl. (Pictured right)To give you a sense of just how much that is, consider that the amount of heroin that typically leads to overdose is 200 to 500 milligrams (it varies widely because of the different tolerances among users, and the differing levels of purity of street heroin). If we split the difference and put the average overdose amount at 350 milligrams, then one pound of heroin contains a total of 1,296 average overdoses. 55 pounds contains a total of 71,280 average overdoses—enough to kill every resident of Bismarck, North Dakota. With that seizure came five arrests. 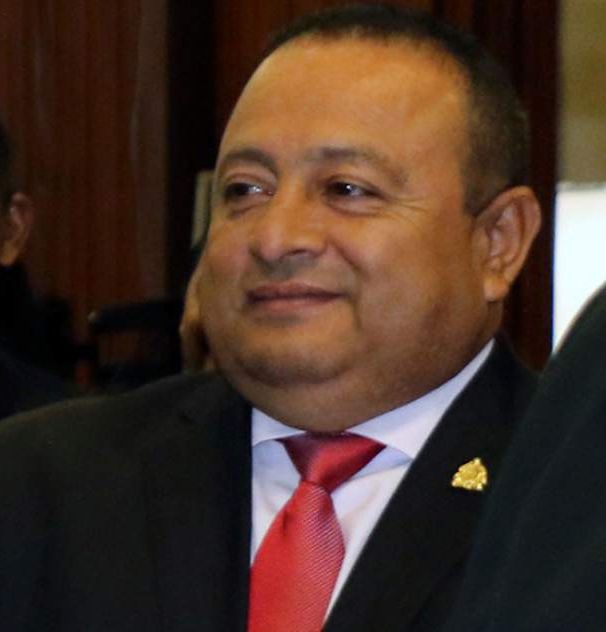 Mr. Martinez (right) is a sitting congressman in Honduras. Arnaldo Urbina is a former mayor in Honduras, and the other two are clearly relatives of his. Why did the four of them attract the interest of the DEA? Well:

From at least in or about 2004, up to and including in or about 2014, multiple drug trafficking organizations in Honduras and elsewhere worked together, and with support from Martinez Turcios, the Urbina Soto defendants, and others, to receive multi-hundred-kilogram loads of cocaine sent to Honduras via air and maritime routes from, among other places, Venezuela and Colombia.  The cocaine shipments were transported westward within Honduras toward the border with Guatemala and eventually imported into the United States, often in coordination with high-ranking members of Mexico’s Sinaloa Cartel.

Whether these four Hondurans are extradited to the United States remains to be seen.

In better news from July, the DEA managed to successfully extradite a leader of the aforementioned Sinaloa Cartel, one Damaso Lopez Nuñez, for cocaine trafficking.

Deaths from cocaine overdose in America range every year from around 4,000 to around 8,000. By comparison, the total number of Americans who have died in Iraq since our 2003 invasion is 4,497.

Of course, not everyone nabbed by the DEA for pushing deadly drugs into the United States is Hispanic, although they certainly make up the bulk. In June, Shahbaz Khan of Pakistan pled guilty to heroin trafficking in a New York court—after the DEA successfully managed to track him and convince Liberia to extradite him to the US.

Mr. Khan had big plans for the American drug market:

In late September 2016, Khan traveled to a country in Southwest Asia where Khan met with the undercover and others. During the meeting, Khan agreed to provide the UC [undercover] with an initial shipment of five kilograms of heroin for importation into the United States. Khan informed the UC that, once the five kilograms of heroin successfully arrived in New York City, Khan would begin supplying the UC with larger quantities of heroin on a regular basis, including up to 10,000 kilograms of heroin at a time. Khan assured the UC that the heroin Khan would provide was 100% pure. In describing his history as a narcotics trafficker, Khan explained he had done work that “had not been done in the past hundred years,” including supplying 114 tons of heroin and hashish to a customer over a one-year period. Khan explained that he could ship drugs “anywhere in the word,” hidden in maritime shipping containers or in air-cargo shipments. [DEA-led pursuit of Pakistani drug lord leads to U.S. guilty plea, DEA Press Release, June 01, 2018 ]

The results of what Mr. Khan and his ilk are pushing look like this: 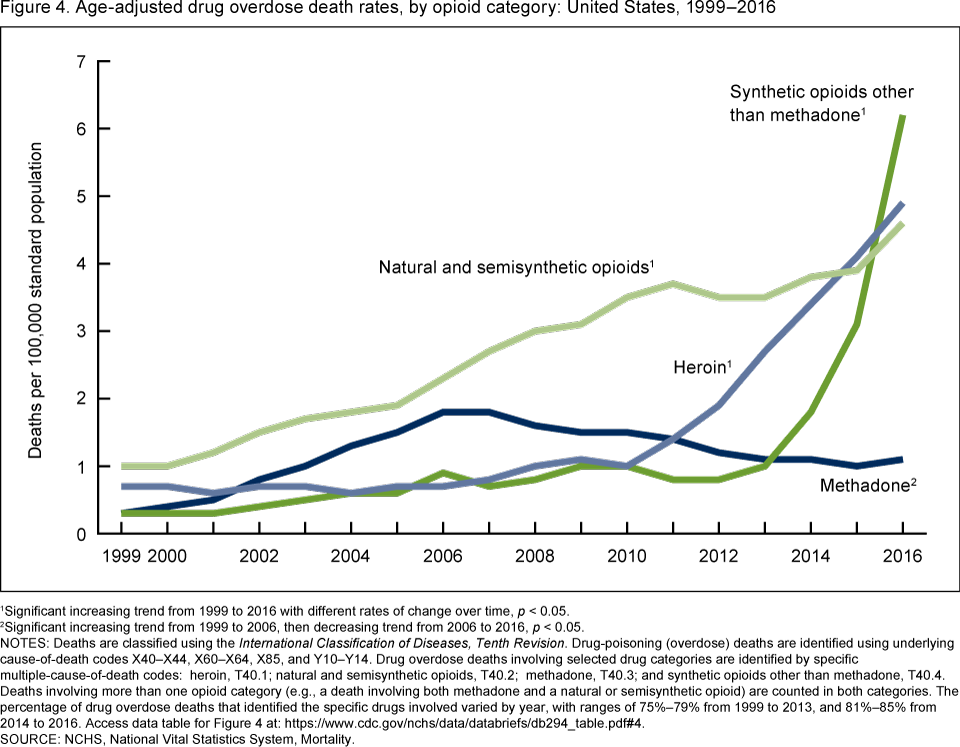 Keep in mind as well that much of America’s murder rate is composed of black thugs getting killed by other black thugs. Overdoses, however, largely afflict whites.

So the colored global South, in addition to outbreeding the white West, is simultaneously killing us by distributing in our countries the poison native to theirs. The importation of hard drugs and the fight against it cannot be understood in colorblind terms. The “opioid crisis” hits whites hardest, as even The New York Times admits: Death Rates Rising for Middle-Aged White Americans, Study Finds, by Gina Kolata, November 2, 2015. But the drugs themselves are reaching whites through Arab, south Asian, and especially mestizo gangsters.

President Donald Trump should combat these three issues with everything he’s got. Those of us who support him should be continually pushing him and his advisors to do so; e.g. Time for More Travel Bans, American Renaissance, July 1, 2018 and An Immodest Proposal For Ending The Opioid Crisis, Social Matter, March 20, 2018.

But no matter what new policy is or is not enacted, the DEA and ICE are on the frontlines of this fight together.

And to them I say, “onward, Christian soldiers.”